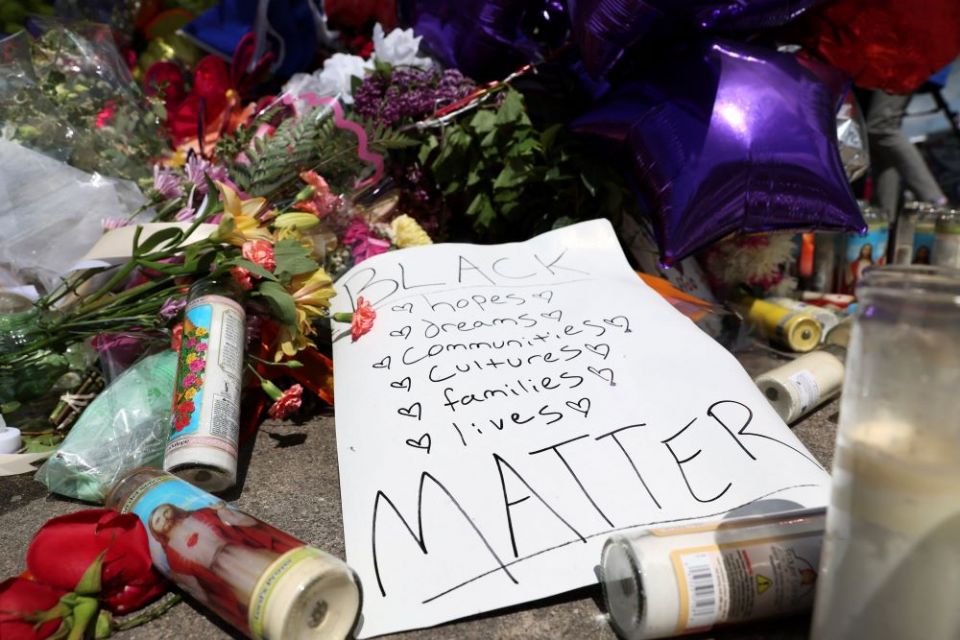 A memorial in Buffalo, New York, is seen May 17 in the wake of a weekend shooting at a Tops supermarket. A white man is accused of killing 10 people and injuring three. Eleven of the victims were Black. (CNS/Reuters/Brendan McDermid)

The recent mass shooting in Buffalo is another chilling reminder that the racism and white supremacist violence foundational to our nation's history must again be confronted with moral clarity and bold action.

Racism, nativism and xenophobia existed long before Donald Trump came to power, of course, but his election — driven in part by white backlash to the nation's first Black president — has helped mainstream white nationalism and energize hate groups such as the Proud Boys.

Fear of an increasingly diverse nation, and the "end of white Christian America," as the public opinion researcher and writer Robert P. Jones put it in his 2016 book of that same name, created a cultural climate ripe for resurgent extremism, QAnon conspiracy theories, an increase in hate crimes and right-wing populism in politics fueled by anti-immigrant rhetoric.

Earlier this week, a Christian nationalist, Doug Mastriano, won the GOP primary for Pennsylvania governor. As a state senator, Mastriano railed against coronavirus lockdowns by citing the Bible, and he denied that Joe Biden won the 2020 election. "I'm really praying that God will pour His Spirit upon Washington, D.C., like we've never seen before," he said at the Trump rally before the Jan. 6, 2021, insurrection at the U.S. Capitol.

Last month, Mastriano raised campaign money at a far-right Christian conference called "Patriots Arise for God and Country" that featured speakers promoting a range of QAnon conspiracies, including the lie that Democratic Party leaders are involved with a secret child-sex trafficking ring. 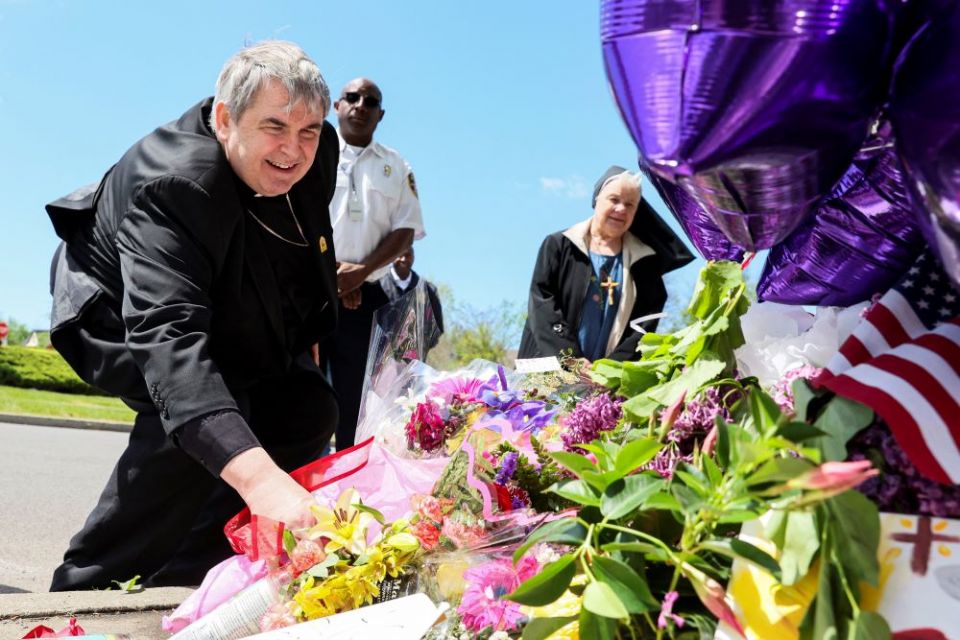 Bishop Michael W. Fisher of Buffalo, New York, places flowers at a memorial May 17, 2022, after a mass shooting at a Tops supermarket. The accused shooter is a white man who espoused white supremacist ideas and whose writings indicate he intentionally target Black people. (CNS/Reuters/Brendan McDermid)

The toxic mix of Christian nationalism, racist tropes, conspiracy theories, and disinformation are not relegated to the fringy corners of the Internet. Tucker Carlson of Fox News, who hosts one of the most watched cable shows in the country, promotes the white supremacist poison that white Americans are being "replaced" by dark-skinned immigrants. Those lies, fear and racism are served up as a TV dinner to millions of Americans every night.

A New York Times story on Carlson found that he promoted variations of the replacement theory to his audience in more than 400 episodes since 2016. In a video posted on Fox New's YouTube account in September, Carlson said President Biden was encouraging immigration "to change the racial mix of the country … to reduce the political power of people whose ancestors lived here."

Replacement ideology is now becoming mainstreamed in several GOP political races. Carlson has rallied his viewers to support the Trump-backed J.D. Vance, the Republican Senate candidate in Ohio who has said that Democrats "have declared that they can't win re-election in 2022 unless they bring a large number of new voters to replace the voters that are already here." In Arizona, the Republican Senate candidate Blake Masters accused Democrats of being pro-immigrant because they want "to change the demographics of our country."

As Catholics, we can draw from our intellectual, moral and spiritual tradition to challenge the racist and anti-immigrant ideologies now ascendant on the religious and political right. Pope Francis has criticized what he calls "myopic, extremist, resentful and aggressive nationalism."

A faithful Catholic can never be a Christian nationalist without defying the Gospel because Catholicism, a global faith, calls us to advocate for the global common good. We stand in the shadow of the cross, not the flag. But as Catholics we are also the inheritors of a tradition that long perpetuated white supremacy as a religiously sanctioned policy. And still today, too many white Catholics with money and power spend more time lashing out at the Black Lives Matter movement and mocking what they deride as "wokeism" on the left than fighting systemic racism.

Timothy Busch of the Napa Institute, an influential network of deep-pocketed conservative Catholics, used his platform at the organization's summer conference last August to claim that the Black Lives Matter movement is "promoting racism, critical race theory, and destroying the nuclear family." Busch added that "this neo-Marxist movement, operating under some discriminatory theory of Black Lives Matter, is attacking the American experiment, which is based on Judeo-Christian principles. We need to pray it will end or our country will be destroyed."

I have no doubt Busch would condemn the shootings in Buffalo and consider himself someone who rejects white supremacy. But when white Catholics who have influence and an audience in the church demean racial justice movements and promote nationalism in the name of defending "Judeo-Christian" principles, their rhetoric contributes to a culture where Black and Brown activists are demonized as threats — ample fodder for both pernicious stereotypes and the grotesque machinations of white supremacist extremists.

The new investigative reporting series in Salon about the growing ties between some traditionalist Catholics and white nationalists — an expose that uncovers how the activist arm of the right-wing Church Militant is increasingly entwined with racist movements — is another wake-up call for anyone who thinks we don't have serious work to do as white Catholics.

Honestly confronting our own internalized racism as individuals and as a church can be an uncomfortable endeavor. But it is essential to the transformation of hearts and the social systems that make racism systemic.

"Not everything that is faced can be changed, but nothing can be changed until it is faced," James Baldwin wrote. Maureen O'Connell's important book, Undoing the Knots: Five Generations of American Catholic Anti-Blackness, offers a model for how white Catholics can face up to our histories and find a way forward as people who pursue racial justice.

"Excavating my Catholic family's racist history was hard because I was continually bracing myself for what I might find," O'Connell told me. "But that braced, defensive posture actually consumes emotional energy that in the long run takes me — takes white Catholics like me — nowhere. I think that the more we work at being honest about our histories, while we may be centering our focus on ourselves, we increase our ability to be more present to the range of emotions that racism sparks. In being more present to all of that in ourselves, we increase our likelihood of being present to others closer to the pain of racism who can lead us in channeling our emotional energy in more productive ways."

The howling pain and anger of grieving Black families in Buffalo must not be their burden alone to carry. White Americans, especially those of us led by a faith that finds resurrection in the shadow of the cross, must also share in that anger and pain so that from this place of anguish and death we can find a new way of living. White supremacy has again proved to be a clear and present danger to a multiracial, multifaith democracy that honors the sacred dignity of all people. It is now our generational task to end it. John Gehring is Catholic program director at Faith in Public Life and author of The Francis Effect: A Radical Pope's Challenge to the American Catholic Church.