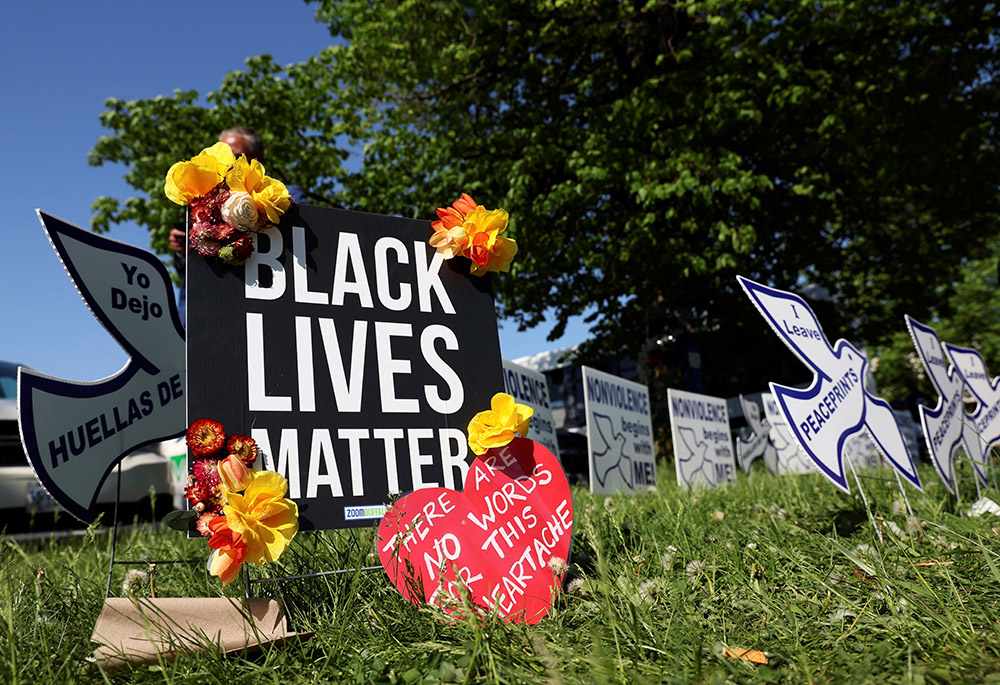 A memorial near a TOPS supermarket in Buffalo, New York, is seen May 15. Authorities say the mass shooting the day before that left 10 people dead was racially motivated. (CNS/Reuters/Brendan McDermid)

In this age of pandemic we have become accustomed to discussions about viruses, their persistence, and their life-threatening mutations. Upon hearing news of the horrific and racially motivated mass shooting at a grocery store in Buffalo, New York, on May 14, I was reminded of a line from Pope Francis' 2020 encyclical letter "Fratelli Tutti, On Fraternity and Social Friendship." In it, Francis writes: "Racism is a virus that quickly mutates and, instead of disappearing, goes into hiding, and lurks in waiting."

The metaphor of a virus is particularly useful in thinking about how anti-Black racism functions in the United States. If we think of this nation as something like a single body composed of many parts (sound familiar?) we might imagine that it is indeed infected with a virus, which results in a chronic illness, a "soul-sickness," known as racism. Like so many viruses — such as the one that causes AIDS, or the one that causes chickenpox and later shingles, or the one that causes mononucleosis and so on — it never fully disappears from the body, even when levels of the virus appear undetectable. Instead, the virus, as Francis correctly said, "goes into hiding, and lurks in waiting."

Likewise, gun violence in this country might rightly be analogized as a virus. In the past, I have suggested that an apt metaphor might be addiction, which is also a disease, but I now wonder if Francis' viral metaphor is more helpful. Within the figurative body of the United States, extended across thousands of miles of geographic space, there are millions of firearms possessed by all kinds of people, which are stored in lockers, carried in holsters, and used for good and bad purposes.

For much of the American population, the thought of guns and their disproportionately destructive power rarely comes to mind until a tragedy such as what unfolded in Buffalo this weekend forces a renewed awareness. In this way, gun violence in this country is akin to a virus because the potential for its devastating impacts is always already present, lurking "beneath the surface."

In this way, we can talk about the twin pandemics that reared their ugly, ruinous heads yet again over the weekend: racism and gun violence. These are often intersecting maladies; particularly when we see overt anti-Black and white supremacist ideology informing mass violence such as in Buffalo this past week or the 2015 mass murder at Mother Emanuel African Methodist Episcopal Church in Charleston, South Carolina. 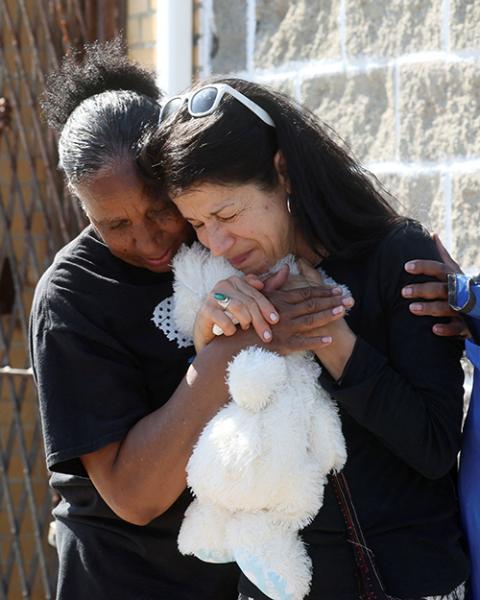 Mourners in Buffalo, New York, react May 15, while attending a vigil for victims of the shooting the day before at a TOPS supermarket. Authorities say the mass shooting that left 10 people dead was racially motivated. (CNS/Reuters/Brendan McDermid)

One of the first things that must be done in the face of these viruses of racism and gun violence is to accurately diagnose the illness. This should be an obvious step, yet it is striking that many people, especially white people, are quick to misdiagnose the situation. Among the red herrings typically presented is to assume mental illness is the cause or at least predominant factor in such horrific violence. The New York Times even ran a story on May 15 with a headline that emphasized the alleged shooter's previous treatment for mental health concerns, which could be used by some to justify mental health stigma.

Despite the popular misconception that mental illness is the root cause of such mass violence, the scientific consensus has been clear for a long time. According to a 2015 scientific journal article, "Epidemiologic studies show that the large majority of people with serious mental illnesses are never violent."

In fact, those suffering from severe mental illness are most likely to be a threat only to themselves, as the article explains, "mental illness is strongly associated with increased risk of suicide, which accounts for over half of US firearms–related fatalities."

Recourse to this stereotype about mental illness contributes to two problems simultaneously. First, it reinforces inaccurate and dangerous mental health stigmas, which further inhibits those needing assistance from seeking it and creates a culture of greater isolation for those already suffering. Second, it distracts from the real issues that are at play in racist violence as witnessed in Buffalo and elsewhere: the viruses of anti-Black racism and the absurd proliferation of guns, especially assault weapons, used to kill many people quickly.

On this second point about the distraction from the real issues at hand, this is another matter that the events of last weekend are again bringing into disturbing relief. There is a lot of denial among some white people about the very existence of the virus of racism in this country, let alone its pervasiveness and persistence. Given my previous criticism of many United States bishops' failure to acknowledge fully the reality of systemic racism, I was not surprised to see this dynamic played out over the weekend. Diocese of Buffalo Bishop Michael Fisher issued a statement on social media about the shooting, but failed to use the word "racism" or acknowledge the racist context.

This sort of literal sin of omission is a milder version of a white misdiagnosis that regularly occurs in the face of the virus of racism. On a regular basis, I receive white vitriol on social media denying the existence of racism in this country. Part of what motivates this sort of absurd pseudo-narrative is a deeply troubling racist conspiracy theory known as "replacement theory" which, as The New York Times recently reported, has increasingly grown mainstream, bolstered by an increasingly extremist Republican Party. According to this distorted worldview, it is actually white people who are the "victims" of racial animus and systemic racism is, therefore, a "lie" or simply "not real."

The failure of bishops, politicians and ordinary citizens alike to speak plainly and clearly about racism only makes the situation worse. It contributes to the white shock and equivocation that follows unspeakable racist violence like in Buffalo. White denial of the reality of racism, our collective failure to diagnosis this virus truthfully and accurately, and then do something about it, compounds the problem and contributes to mainstream willful ignorance about the complexity and reach of white supremacy in our society and church.

However, Black women and men have been experiencing the long-standing and deep-rooted effects of white supremacy and systemic racism in communities like the one terrorized in Buffalo this weekend for decades. As the Times summarized in an article on May 15, "For many Black people living here, the effects of discrimination have been felt much longer — and the violence represents a uniquely harrowing moment in a lengthy history of trauma."

I first learned of the Buffalo shooting shortly after I boarded an airplane on a flight to, of all places, Buffalo. I had just left the commencement ceremonies at St. Mary's College in Notre Dame, Indiana, and was heading to another commencement at St. Bonaventure University, about 60 miles south of Buffalo, scheduled for the following morning.

Not only was it eerie to realize I was flying into the city where this mass shooting had just taken place, but also the commencement speaker I had just heard deliver a powerful and theologically rich address was M. Shawn Copeland, the eminent Black Catholic theologian. Copeland has spent much of her impressive career writing, speaking and teaching about the need for Catholic theology to grapple with the long-standing history and persistence of systemic racism in the church and society.

The juxtaposition of reflecting on Copeland's antiracist theological work alongside the breaking news of white supremacist terrorism against a predominantly Black community in the city where I was then traveling, put into sharp relief a fundamental fact that white people can too easily overlook or forget: these viruses of racism and gun violence are also a Christian problem.

Those who identify as Christians, especially those of us who are white Christians, have a responsibility rooted in the core of our faith tradition to not shy away from diagnosing and responding to these viruses. Because each of these contradicts the core of Christian faith, you cannot claim to be a legitimate Christian and espouse white supremacist ideology, deny the reality of racism, embrace white nationalism or conspiratorial narratives, or support the proliferation of assault weapons and other weapons of mass destruction.

And pretending that the body politic or the body of Christ is not infected with these destructive viruses will not make them go away. They will, like the pathogens within human bodies, only grow stronger, more severe, and cause more devastating consequences, ultimately resulting in death as we witnessed last weekend.