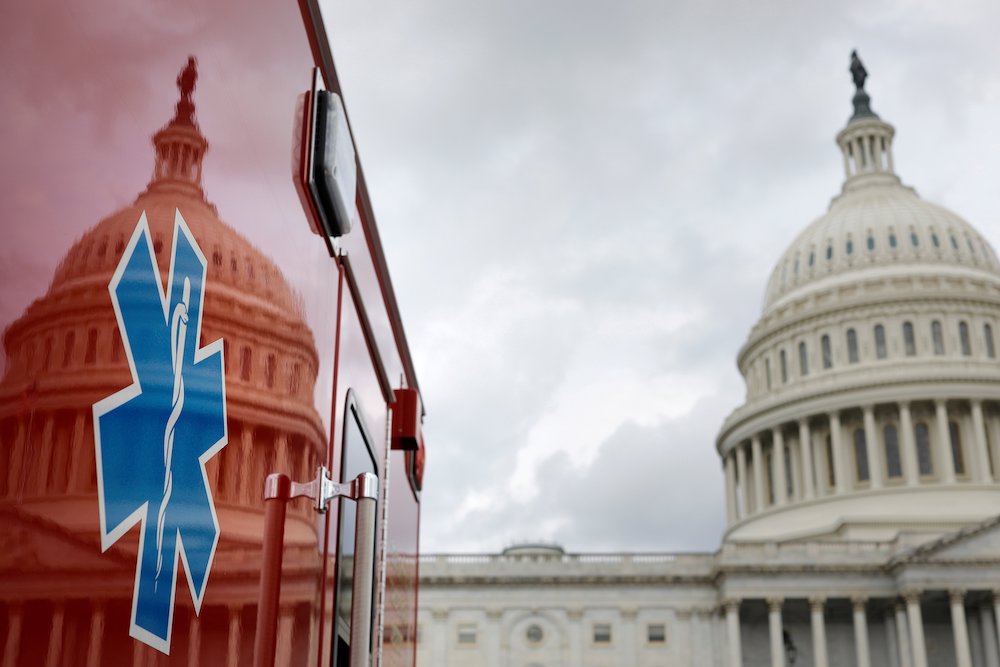 The U.S. Capitol is reflected on an ambulance July 16, 2020, in Washington. (CNS/Tom Brenner, Reuters)

The U.S. Conference of Catholic Bishops has hit a stomach-churning new low. I say that as someone who is extremely proud of my faith, despite the struggle it has taken to remain a Catholic.

In an article published on March 24, National Catholic Reporter national correspondent Christopher White broke the news that the bishops' conference had "quietly lobbied behind the scenes" to scuttle legislation passed by Congress last fall that established a national toll-free hotline to prevent suicide. Their objection? The legislation contained funding targeted at addressing the staggering epidemic of suicide and suicide attempts by LGBTQ people, especially youth.

In case you think that cannot be true, let me restate it. The leaders of the Catholic Church were willing to prevent help being made available to about 12 million Americans who seriously consider suicide each year because that help extended to LGBTQ people.

Fortunately, Congress passed the historic National Suicide Hotline Designation Act last year, designating 988 as the number for mental health emergencies. But I felt punched in the gut when I read about the bishops' behind-the-scenes lobbying efforts. Tears of shame rolled down my face because I know their actions are not reflective of the values that were instilled in me by the Catholic Church. The church I know has a long tradition of caring for some of the most vulnerable in our society.

As recently as January, several bishops, including a cardinal and an archbishop, issued a statement in support of LGBTQ youth, telling them that "God loves you" and "God is on your side." This is the Catholicism that I know, rooted in our belief that every human life is a gift of God and that all people should be treated with dignity and respect.

While we are called above all things to love God and our neighbors as ourselves, I acknowledge that some church leaders may have complex feelings about LGBTQ issues. But for the bishops' conference to actively oppose common-sense legislation over LGBTQ provisions is simply unconscionable.

The bishops' conference has taken similar paths to justify its opposition to other critically important legislation — most notably the Violence Against Women Act and the Equality Act, which would provide nondiscrimination protections to LGBTQ people as it does to all others. Why? For the same reasons.

A recent PRRI survey found that 81% of Hispanic Catholics and 77% of white Catholics support nondiscrimination protections for LGBTQ Americans. Whether on LGBTQ equality or other social justice issues, this survey and many others demonstrate just how out of touch the church hierarchy is with its own flock.

Over and over, they have demonstrated they are willing to sacrifice the greater good of the nation, rather than extending grace to all. They do so despite the oft-documented reality that they do not reflect the will of most U.S. Catholic voters on these issues.

It is time for federal, state and local legislators to consider where they want to side on these issues — with Catholic voters who support our church's social justice commitment to the dignity and equality of all, or with a group of less than 400 men who are bound to beliefs on gender, sexuality and family structure that have been rejected by most of our nation.

It is time for Catholics to be vocal about their support for equality, for compassion and for solidarity with the poor and marginalized, and the ways in which church leaders have failed to represent these values in their lobbying.

As Catholics, we must scrutinize everything through the lens of our sacred scriptures and hold the bishops' conference accountable to the most fundamental values of our faith: We are called to love and serve all people, especially those who are in need.

[Marianne Duddy-Burke is the executive director of DignityUSA, the world's longest-standing organization of Catholics committed to justice equality and full inclusion of LGBTQ+ people in our church and society.]