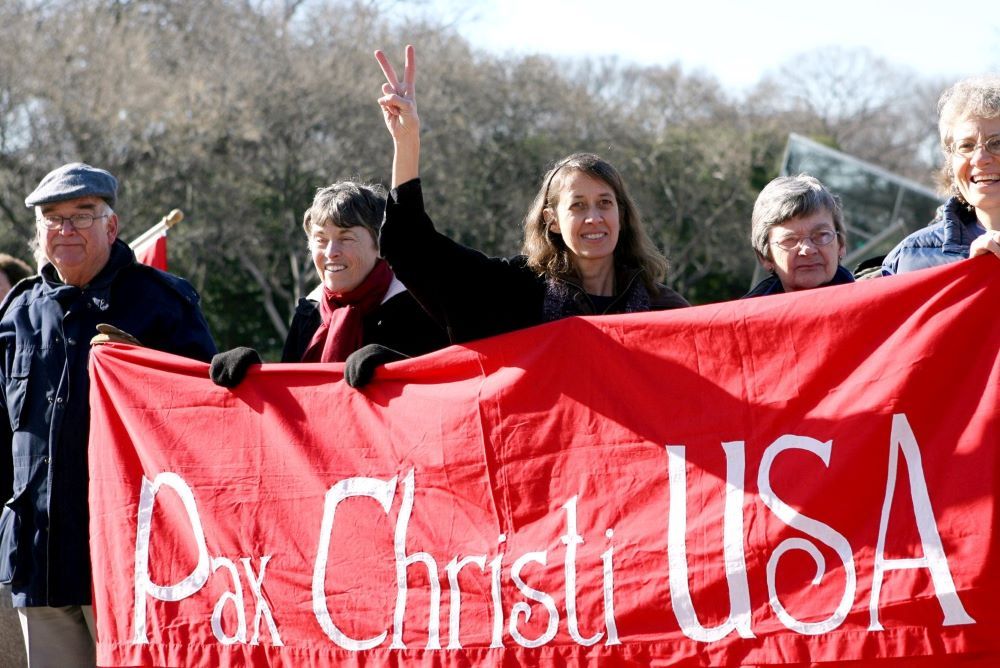 Jean Stokan, a Washington-area resident, flashes a peace sign as members of Pax Christi gather for an anti-war rally on the National Mall in Washington Jan. 27, 2009. Tens of thousands of people participated in the rally and a march urging the United States to get out of Iraq. (CNS/Nancy Wiechec)

At the beginning of each liturgical year, the church listens attentively to the Hebrew prophets who described the coming of the Anointed One. Isaiah is a frequent voice in the Advent liturgy, and his vision of the day of the Lord provides great inspiration and hope for those who long for a time of peace. He dreams of nations turning swords into plowshares and spears into pruning hooks, lions and lambs lying down together, and a little child who leads them. Yet each Advent, Christians who celebrate the coming of the Prince of Peace must acknowledge how far we are from realizing this great messianic vision.

As Pax Christi USA celebrates its 50th anniversary of establishment as the official Catholic peace movement in the United States in August, we mark this golden jubilee in the midst of daily reports of the tragic loss of lives from unprovoked attacks on Ukraine by Russia. Bodies pile up in streets and people are displaced at home and seek refuge in other nations. Closer to home, Independence Day celebrations were marred by mass shootings — coming as the nation was still grieving yet another slaughter of innocent children in their classrooms in Uvalde, Texas.

Wars and violence continue in Afghanistan, Ethiopia, Myanmar, Sudan, Yemen and many other places on the planet — each contributing to the increased displacement of people and ecological destruction in addition to the loss of sacred human lives. Nations like our own continue to spend disproportionate amounts of their budgets to procure weapons, and the threat of nuclear destruction continues, even when no one is paying attention. Beating swords into plowshares remains a dream, but a dream whose time is long overdue. 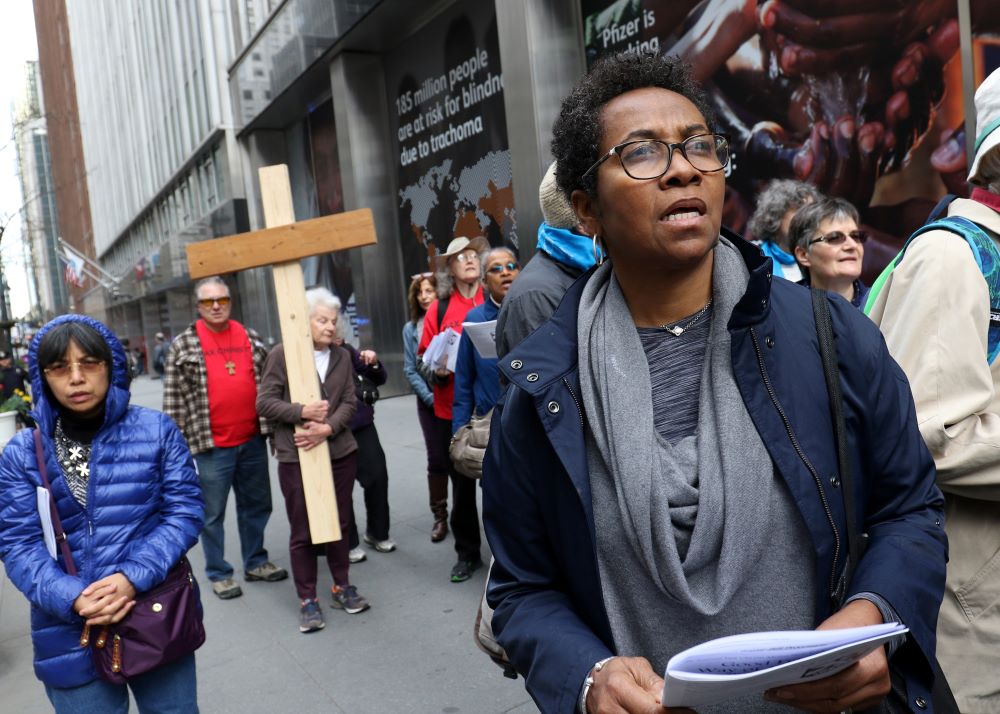 Flore Berger prays during the 35th annual Pax Christi Metro New York Way of the Cross/Way of Peace April 14, 2017, in New York City. "Jesus Calls Us to Active Nonviolence" was the theme of the year's Good Friday commemoration. (CNS/Gregory A. Shemitz)

In the early 1970s, when the U.S. was polarized over engagement in the war in Vietnam, Catholic peacebuilders like Eileen Egan, Gordon Zahn, Gerry Vanderhaar, Ed Guinan, Notre Dame de Namur Sr. Mary Evelyn Jegen, retired Detroit Auxiliary Bishop Tom Gumbleton, Joe Fahey and others took inspiration from the French Catholics who sought to use their Catholic faith to overcome resentments from World War II against Germans who shared their faith. From its inception, Pax Christi has promoted a spirituality of nonviolence that engages individuals, communities and nations in the long-term search for peaceful resolutions to conflict.

The signs of the times that were current in 1972 remain, even if circumstances and particulars have changed. The Gospel of Jesus, the Peacemaker who reconciles humanity with God, continues to call us all to conversion. Members of Pax Christi strive to respond to that call, to root out tendencies to violence in their own hearts and minds, to and join others in a community that wants to live the spirit of the Beatitudes.

The methodology of Pax Christi has also been consistent: prayer, study and action. Realizing that peace is ultimately a gift of God and the work of the Holy Spirit, Pax Christi members pray daily to be receptive to God's gift of peace. Prayer is sometimes done in a public format, providing a faithful witness in places where the forces of violence and death are operative and calling forth a response from other Christians who are complicit in the violence perpetrated in their name.

Beating swords into plowshares remains a dream, but a dream whose time is long overdue.

Study of the issues that provoke violence and injustice as well as teaching alternatives to violence and the spirituality and practice of active nonviolent resistance allows Pax Christi to adhere to Jesus' instruction to be as cunning as serpents and gentle as doves. The action undertaken by Pax Christi is in relation to the prayer and study; it is sometimes symbolic and liturgical; it is sometimes practical as in communication with lawmakers and parties in dispute; it is always undertaken with respect for those who differ and avoids the demonization of the other.

Pax Christi USA has strengthened its commitment to building peace with justice in U.S. American society and promoting Catholic social teaching, both in and outside the structures of the church. For the last 20 years, Pax Christi has been especially attentive to systemic racism as an inherently violent source of injustice in the United States. Pax Christi recognized that, like so much of the U.S. church, the organization was predominantly one of white people of a certain generation.

A movement that calls itself "catholic" without reflecting some of the diversity of the U.S. church membership is already impoverished. To engage people of color who are passionate about the need for peace and who want to work for the dismantling of injustice in the movement, it has been important to amplify their voices and to make sure those voices are heard and to increase the numbers of people of color within the organization.

Pax Christi's Anti-Racism Team (PCART) has been providing workshops for religious communities, students, parishes and other organizations that help them to see how systemic racism works and to equip them to do the hard work of social change. With all that has happened in recent years with the emergence of white supremacist organizations into the open and the greater awareness of police violence against the African American community, PCART and all of Pax Christi USA is eager to build on the greater awareness of racial injustice and do even more to see racial justice as a prerequisite for a peaceful society.

The great witness for nonviolent action, Martin Luther King Jr., longed to form a beloved community, which he meant to be a multicultural community, because he realized that the forces of injustice could only be successful when they divide the disenfranchised among themselves and cause them to be suspicious of each other.

Pax Christi USA is also aware of injustices within the church's structure. For many Catholics who are disappointed that their Sunday homilies do not draw from the rich social teaching of our tradition and in some cases even cause members of the community to feel alienated, Pax Christi has been their main experience of community within the church and provides the sustenance needed for the journey to the Reign of God. Racism, sexism, militarism and homophobia need to be confronted within the church as well as the larger society if we want to build a lasting peace with justice. 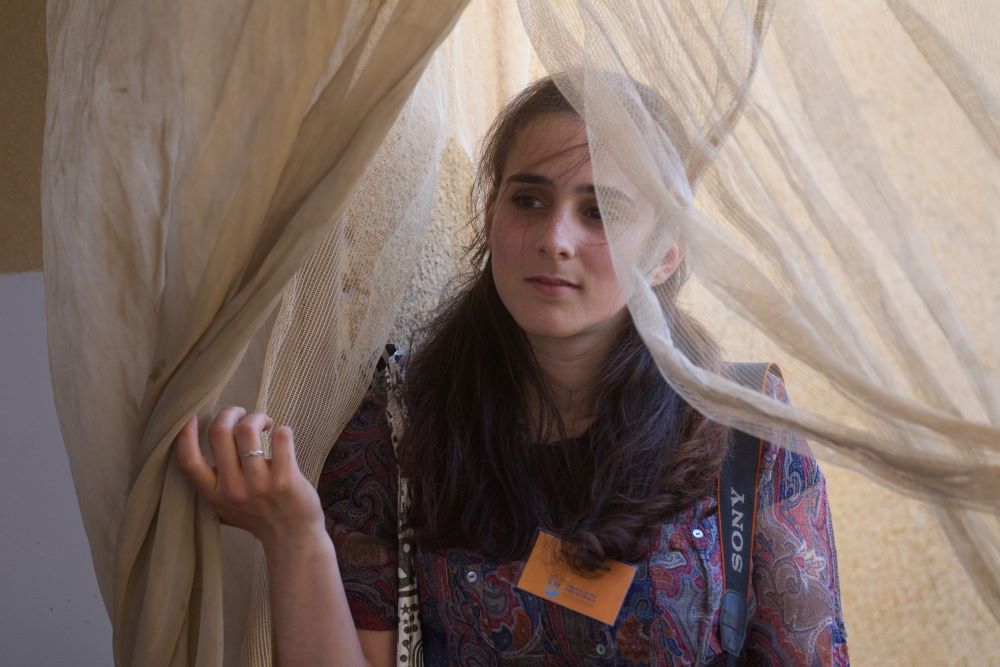 A member of a Pax Christi delegation listens to a presentation during a visit in Fasayel, West Bank, in this May 15, 2015 file photo. (CNS/Miriam Alster)

During the pontificate of Pope Francis, Pax Christi has rejoiced to see him embrace the spirituality of the nonviolent Christ and call for a reevaluation of the just war theory in our teaching. The pope has repeatedly described the present situation of the world as a "third world war fought piecemeal" and has confronted what he terms the "globalization of indifference" with his calls for a more peaceful and fraternal world. He has emphasized the need for a more fraternal world and has taught us so much about the need to include the marginalized and those on the peripheries.

As we observe this golden jubilee of Pax Christi USA, we continue to long for the realization of Isaiah's vision of swords and spears becoming instruments for cultivation of food. But we do not wait idly, we contribute to the building of that peaceable kingdom which Jesus inaugurated with his death and resurrection. We cultivate inwardly and demonstrate outwardly that peace which was breathed by the Risen Christ upon the apostles.