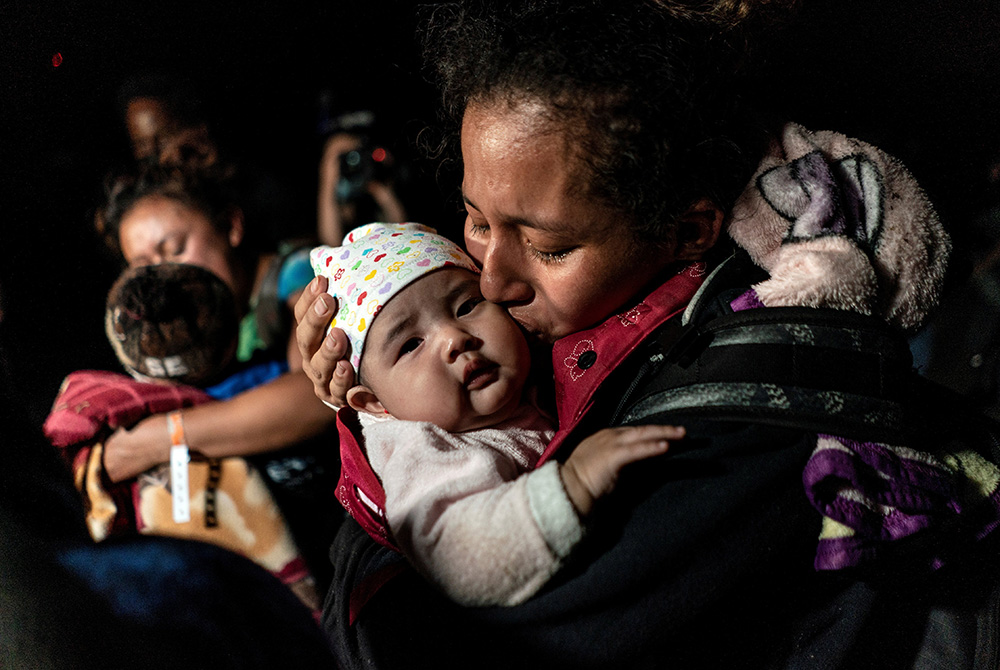 A mother from Guatemala seeking asylum in the U.S. kisses her 3-month-old baby while waiting to be escorted by Border Patrol agents April 7 in Roma, Texas, after crossing the Rio Grande into the United States. (CNS/Reuters/Go Nakamura)

Editor's note: This is the third of a series of columns focusing on the Beatitudes.

Different? Yes, it was different. Booths and tents and vendors lined both sides of the commons. The voices of presenters from one stage after another wafted out into the crowds, tangled and demanding, women as well as men, lay as well as clerical.

It was one of the foremost spiritual conferences I'd ever attended. In fact, I admit, I was as intent on experiencing the event itself as I was interested in having a conversation on my own ideas. One voice captivated me almost immediately.

The speaker on stage at the largest of the meeting tents was Bishop Elias Chacour, an Arab-Israeli Melkite Greek Catholic whose life had been spent promoting peace between Arabs and Jews. Like Jesus, an Aramaic speaker, Chacour was presenting to contemporary Christians the Jewish-Semitic-Aramaic interpretations of the Beatitudes.

As he went into detail, I stood in front of the tent transfixed. After all, my Western Christian education on the Beatitudes was clear but, it seemed, maybe not totally correct. Where I came from, the basic understanding of living out the Beatitudes Jesus taught went like this: Blessed are those who (do something) for they will receive (something.)

It was a give and take proposition, a quid pro quo, do this and you will get that. Transactional, they say today. You will be "blessed." Only we said "bless-ed." Meaning, "holy." Holy are you and you will be rewarded for that.

But this speaker of the language that Jesus spoke, too, taught a different translation. "Blessed," Chacour said, meant "happy" are you. "Happy."

Clearly the Beatitudes were not about an exchange system in heaven. They were about what happens when we live one way rather than the ways of the world around us. These teachings were about what brought contentment — a sense of enoughness, of sufficiency, to a person's life even in the face of the great ambitions, desires, power, status, wealth or success that were the coins of the realm of my world now. They were happy who were humble, meek and satisfied with enoughness rather than surfeit, we were being told. Happy were those who knew what it meant to be "poor of spirit" rather than intent on pretending to be more than they really were.

It was a light out of darkness for me. It was hope and expectation where a sense of endless burden had been instead. I was trying to be what I never did manage to achieve rather than accept the poverty of my spirit, my endless desire, my appetite, my passion, my greed for what wasn't worth it to begin with.

It opened another whole way of looking at other people in the light of my own spiritual needs and spiritual failures.

Related: Blessed are the meek — saving the tradition

The monastics of the desert tell the story of brothers who were trying to determine a proper penance for one of them who had failed in his monastic duties. But when they assembled to review the situation, Abba Moses, the most revered of the eremitical community, was not there. So they sent for him to confirm their decision and approve of the penance saying, "Come, everybody is waiting for you." So he took a worn-out basket with holes, filled it with sand, and carried it along. The people who came to meet him said, "What is this, father?" And the old man said, "My sins are running out behind me and still I do not see them. And today I have come to judge the sins of someone else." When they heard this, they said nothing to the brother and pardoned him.

Abba Moses knew clearly what he was — imperfect, but honest about it; gentle to the rest of the world because he knew his own limits; wholly in need of God's help, not anyone's paragon of virtue; aware that God's love would suffice for his own weaknesses. The lesson is a universal one: Indeed, blessed are those who realize their own limits, weaknesses, need for support, and dependence on God. Emptied of themselves they see the goodness in others. They are able to speak the truth in humility. They realize their own powerlessness and God's greatness and the basic goodness of the world around them.

The insights in the powerful little statement were profound. And so, those who know themselves are "happy," contented, not exercised, not dismissive of others, able to learn from everyone.

But here we are in our own time: Claiming our "rights" rather than struggling to care for the needs — the very lives — of those around us.

The opposite of poverty of spirit is obvious: Pride, the overarching disdain of others, is the disease of independence. It is the narcissism that exiles us from ourselves. It's this that makes it impossible for us to learn, to grow, to create community, to be part of the human family. It's this that creates the false criteria that slivers life into colors and sexes, into money and poverty, into power and economic slavery, into "our kind of people" and "those people."

This kind of pride, of narcissism, is not about human development. It's about the infectious disease of self-centeredness. Like chemicals used to destroy weeds, it takes the flowers down with it, too. It destroys everything in its way.

And worse, this kind of pride is a virus so transmittable that we not only stand to have it ourselves but to infect others with it as well.

We lose any sense of purpose beyond ourselves. Immigrants come carrying infants on their backs. They are walking out of the creeping drought brought on by nations that farmed and mined these native resources for themselves. But on television, instead of welcome, we call them "rapists, murderers, bad people" — all designed to forgive our own sins by labeling theirs.

From where I stand, we lose a sense of commitment to anything beyond what services our own concerns. We want "law and order" here, we say, but not equality of the races or voting sites everywhere.

Instead of grasping the present moment, instead of understanding that so much of our present problems we have created for ourselves by refusing to face the imminent danger that comes with overheating the planet, overusing fossil fuels, overreaching in our desire for security, and overlooking the effects on the globe. And so, we live with crushed spirits, in a state of depression we do not even recognize in ourselves while the truly "poor in spirit" have no grandiose evaluations of themselves and so are happy to be part of the co-creating God gave us to do.

Without humility, John Buchan says, there can be no humanity. No care for the other. No acceptance of the self. No identity with the human community. No hope for breaking out of the greed and grasp of the present era that allows for massive tax breaks for one kind of people and the housing evictions of families and children of others.

Without such poverty of spirit, such simplicity of desire, such contentment with enoughness, there can be no awareness of the riches that come with simply being alive, of being loved and so, loving earth and all in return.

The fact is that we are being confronted with a major choice now. We can live in a way that makes us happy with what we have. Or we can go on looking for the "rewards" of a superfluity we cannot have but think we deserve — whatever happens to everybody else in the world, to the world itself — and to us, as well, in the long run.

Read this next: Blessed are those who mourn now — and do something to make it better