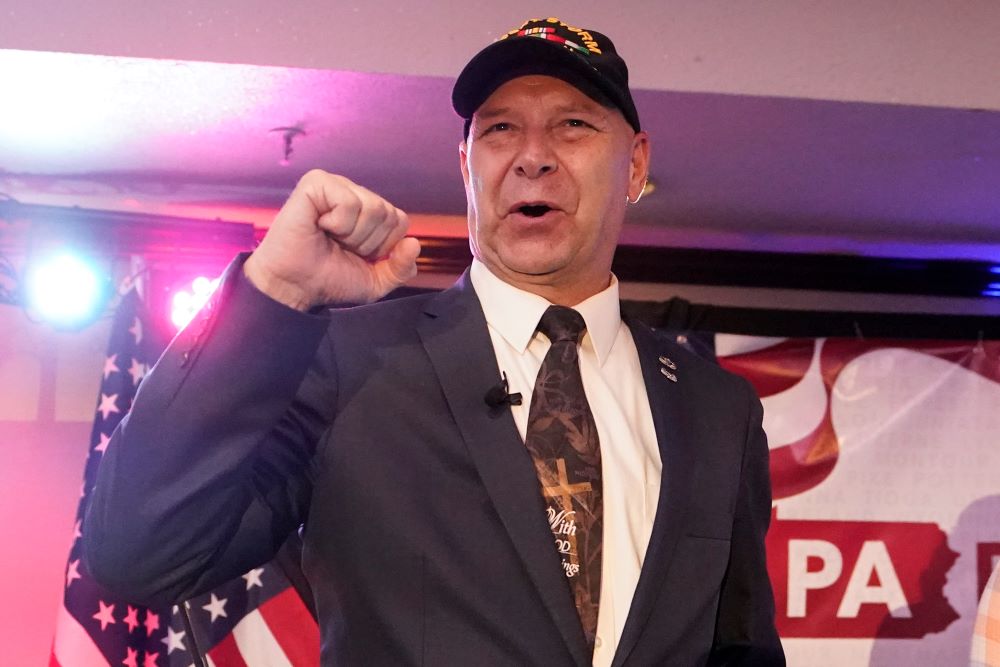 Pennsylvania State Sen. Doug Mastriano, Republican candidate for governor of Pennsylvania, was present at the Jan. 6, 2021, assault on the U.S. Capitol and has expressed extremist views. Here he gestures to the cheering crowd during his primary night election party May 17. Pennsylvania's Democratic gubernatorial candidate, Josh Shapiro, is currently the commonwealth's attorney general. (AP/Carolyn Kaster)

Political action committees and funders associated with the Democrats have been pouring money into this year's primaries, during which the two parties select nominees. What makes this year different is that a lot of the Democratic money, some $44 million according to the watchdog group Open Secrets is going to support Republican candidates, and not just any Republican candidates, but the most extreme candidates on the ballot.

According to the Open Secrets report, Pennsylvania's Democratic gubernatorial candidate, Josh Shapiro, who is currently the commonwealth's attorney general, spent $840,000 highlighting the positions held by Republican candidate Doug Mastriano, who won the Republican nomination in May. Mastriano was present at, but has not been charged in relation to, the Jan. 6, 2021, assault on the U.S. Capitol. His victory speech on primary night was so horrifying, the bishops of Pennsylvania really should have spoken out.

In Illinois, incumbent Democratic Gov. J.B. Pritzker and the Democratic Governors Association plowed a whopping $35 million into the GOP campaign with the goal of assisting State Sen. Darren Bailey, according to Open Secrets. The Trump-endorsed Bailey, who has a history of extreme positions, won the GOP primary with 55% of the vote. Pritzker thinks he will be easier to beat.

And in Maryland, the Democratic Governors Association ran an ad ostensibly showing that Trump-backed candidate Dan Cox is too conservative for the state. But before the final five seconds of the 30-second spot pointed out that this is a Democratic ad, it offers a laundry list of Cox's positions on abortion and guns designed to appeal to conservative GOP primary voters. It worked. Cox is now the GOP nominee for governor of Maryland.

These efforts are terrible in two ways, both of which are important.

First, as many have noted, this strategy entails an obvious and enormous risk: What if these extremist candidates win in November?

Political contests in Pennsylvania are always close. In 2020, Joe Biden beat Donald Trump in the Keystone State by only 82,166 votes of almost 7 million ballots cast. According to FiveThirtyEight, three of the last four polls conducted in the Pennsylvania governor's race show the contest within 3 or 4 percentage points. Maryland has an incumbent Republican governor now, albeit a moderate, anti-Trump Republican. Illinois is the only state of the three where a win by the extreme Republican candidate is all but impossible.

Democrats are firmly in control of the state legislatures in Illinois and Maryland but Republicans have controlled both houses of the state legislature in Pennsylvania since 2010. The last time the Democrats controlled the Pennsylvania State Senate was in 1993! And, what is worse, the governor of Pennsylvania appoints the secretary of state, the person charged with conducting elections. If Mastriano were to win, what legal bulwark would stand in the way of him essentially handing the commonwealth's 20 electoral votes to Trump in 2024?

November's midterm could become a tsunami for Republicans. Biden's approval rating is down and inflation is up, with interest rates right behind. There is some debate about how relevant an incumbent president's approval rating is to the midterm results, but the climate for Democrats is bad — very bad.

People are ill-advised to play with fire under any circumstance but when the current political climate is as prone to wildfires as is the natural environment, helping get these extremist GOP candidates within striking distance is a risk that Democrats should not have taken.

The second reason this strategy is rotten is its cynicism. Even if it works, it will have cheapened the democratic process and made recovery from the Trump era more problematic.

We live at a time when our democracy is threatened — and threatened profoundly. Our institutions held during the last transition but it was a close-run thing, as the hearings by the Select Committee to Investigate the January 6th Attack on the U.S. Capitol have demonstrated. Key people in key positions — Vice President Mike Pence, Georgia Secretary of State Brad Raffensberger, Philadelphia County Board of Elections official Al Schmitt — honored their oath, not their party. The testimonies from Raffensberger and Schmitt before the select committee were especially dramatic in demonstrating how much uglier the constitutional crisis would have been had they not honored their oaths. Their testimonies also showed the fascistic threats of violence those officials faced.

Democrats have been keen to praise these officials. Many have rightly praised the courage of Reps. Liz Cheney and Adam Kinzinger (both Republicans) for their participation in the select committee's work and their forceful denunciation of the putsch mounted by Trump. That praise rings hollow if the Democrats are, at the same time, helping members of Trump's cult gain leadership within the GOP.

Democracy needs two robust parties. Government needs to operate on the assumption that all participate within the scope of the Constitution, even while they contest public policy and even what the Constitution does and does not permit. Helping those who are willing to subvert an election is no way to bolster democracy at this critical time.

To be clear, there is no moral equivalence between J. B. Pritzker and Rudy Giuliani. Still, all of us who care about the future of our democracy need to be about the business of raising the bar of civic and constitutional duty, building confidence in self-government, and supporting the institutions and especially the elections that keep the demos in democracy. Democrats who have been funding the campaigns of these extreme GOP candidates should know better. And if these extremists win? Lord, have mercy.