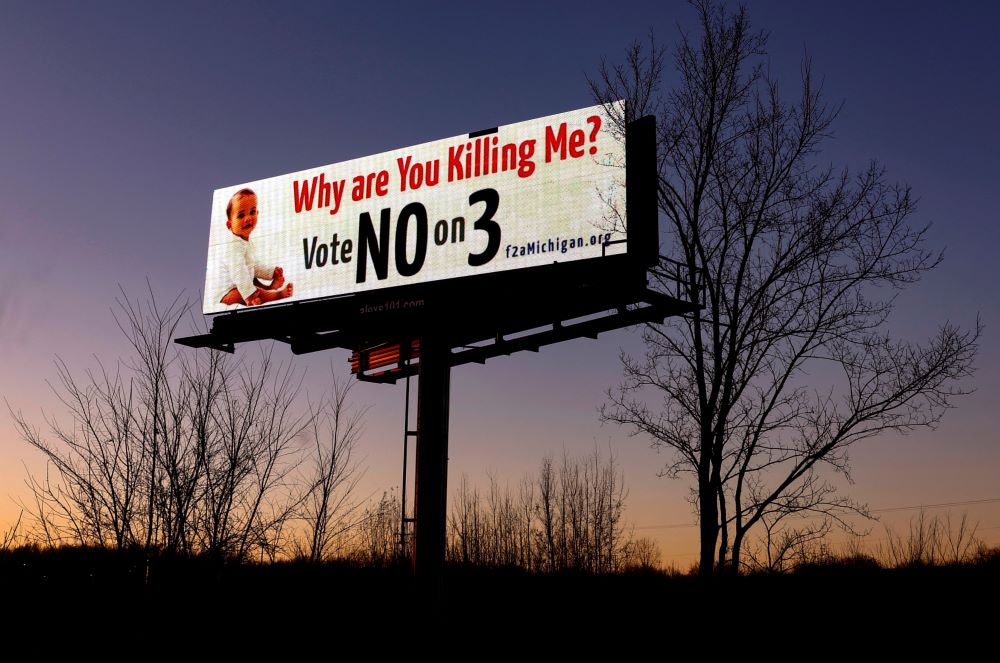 A Michigan billboard against Proposal 3, a ballot measure to codify a right to an abortion, is seen along I-75 outside Detroit, Michigan, Nov. 6. Voters approved the measure in the Nov. 8 midterm election. (CNS/Reuters/Evelyn Hockstein)

Democrats may have exceeded expectations in the midterm elections, but they should not breathe a sigh of relief. The country is deeply and narrowly divided. President Joe Biden promised to return the country to normalcy, and normalcy has not returned. Candidates for his party won largely not on their own strength with voters, but because they faced truly extreme acolytes of former president Donald Trump.

Three aspects of the election stand out as especially significant for Roman Catholics: the issue of abortion and the throwaway culture; the demographic reality of Latino voters continuing to shift to the GOP; and participation in, and preservation of, our democracy.

Abortion as an issue had a mixed night. On the one hand, voters in California, Michigan and Vermont adopted constitutional provisions that enshrined abortion rights and voters in Kentucky rejected a proposal that would have barred including such a right in the constitution. Abortion may also have helped some Democrats in blue states beat back challenges in a difficult economic climate.

On the other hand, voters in Ohio, Florida and Texas did not punish those Republican governors who signed restrictive abortion measures this year. They are, respectively, the seventh-, third- and second-most populous states in the Union and all now tilt firmly to the GOP. Given the referendum results, look for GOP legislators to move slowly in enacting extreme measures, following instead the basic contours of the original Roe v. Wade decision, which allowed states to ban abortion in the third trimester and to regulate it, consistent with concerns for maternal health, in the second trimester. 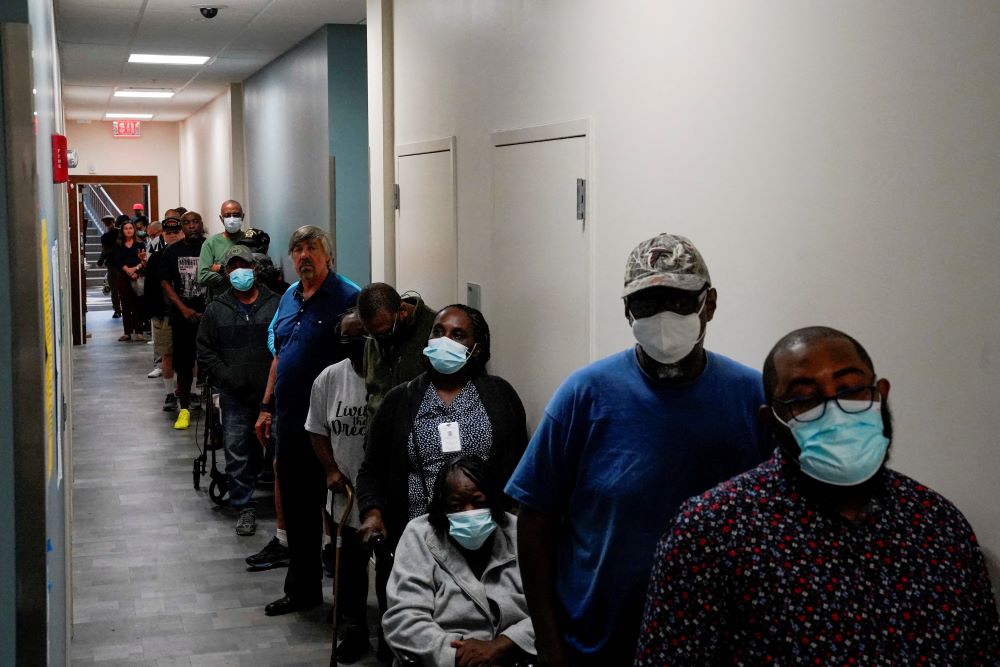 A line forms at the Citizens Service Center in Columbus, Ga., Oct. 17 as early voting began for the midterm elections. (CNS/Reuters/Cheney Orr)

In states controlled by Democrats, we can expect the party to remove any restrictions on abortion whatsoever. Despite the mixed results on Nov. 8, pro-choice advocates claimed victory and insisted that the party has no place for pro-lifers. No one seems concerned about what it says about the sad state of "liberalism" in the U.S. that it is so willing to throw away human life, for any reason and at any time before birth.

Both parties have now rejected any ethic of solidarity, any politics of the common good. Pope Francis' 2015 address to Congress is a faded memory of no consequence. Both parties lean into self-definitions that highlight their willingness to dehumanize others. The Republicans become indifferent to immigrants and the Democrats become indifferent to the unborn. It is grim.

Latinos were once heralded as the Democrats' demographic future, but not anymore. Tim Alberta, staff writer at The Atlantic, recently documented the shifting attitudes among Latino voters. He spoke with Mary Rose and Earl Wilcox who worked for decades organizing Latinos in Arizona for the Democrats. Their restaurant in South Phoenix doubled as an ongoing campaign headquarters. They were ecstatic when Latinos helped Joe Biden carry Arizona in 2020.

Then, Mary and Earl started hearing the complaints that had already turned Latino voters in South Texas toward the GOP: "Democrats are insufficiently patriotic; they are elitist in their cultural sensibilities; and they are oblivious to the struggles and priorities of working people." Find me half a dozen Democratic campaign consultants willing to acknowledge that Democrats are "insufficiently patriotic" or "elitist in their cultural sensibilities," and dinner is on me.

The result of that disconnect was evident Nov. 8. I am still shocked that Gov. Ron DeSantis and Sen. Marco Rubio both won Miami-Dade County, which is 69 percent Latino, with 55 percent and 54 percent of the vote respectively. To put that in perspective, Hillary Clinton carried Miami-Dade by just over 29 points, with 63 percent of the vote to Donald Trump's 34 percent. Results in Texas appear slightly more mixed, as Democrat Vincente Gonzalez unseated Republican Rep. Mayra Flores, but Republican candidate Monica De La Cruz flipped Texas' 15th District, defeating Democrat Michelle Vallejo.

It is astonishing that the pro-life movement was so ill-prepared for the post-Roe political landscape.

Alberta notes that Democratic strategists and Fox's Tucker Carlson both misunderstand the Latino vote. "The very thing that breathed life into the Democratic Party 20 years ago—the focus on identity and inclusion—is making it more popular with white voters, and less popular with Hispanic voters," he writes. More importantly, Latinos respond to aspirational politics, not the politics of grievance peddled routinely at MSNBC and other left-leaning media outlets. Alberta's article should be required reading for anyone concerned about the future of the Democratic Party.

The issue of election integrity is a paramount moral concern, or should be, for Catholics. Indeed, the example of the U.S. church helped the universal church abandon its lingering hostility to democracy at the Second Vatican Council. For Catholics, it is the value we place on social participation and the ability of democracy, generally, to honor human dignity that commend it from a moral perspective. Those of us who take a darker, more Augustinian view of human relations value democracy as the only system that enshrines self-correcting mechanisms, even if they are not always used.

Thankfully, most of the GOP gubernatorial and Senate candidates in swing states who denied the election results of 2020, or flirted with conspiracy theories about them, lost their races. Not all, however. Kari Lake, the Trump-backed, election-denier in Arizona could still become that state's governor. In Nevada, another Trump-endorsed, election-denier, Joe Lombardo, has maintained a steady lead over incumbent Democratic Gov. Steve Sisolak. They were the outliers, however, among competitive races.

Republican Senate candidate Don Bolduc in New Hampshire lost to Sen. Maggie Hassan. GOP gubernatorial candidate Tudor Dixon came up short against incumbent Gov. Gretchen Whitmer, and both conceded their losses. In Pennsylvania, gubernatorial candidate Doug Mastriano, who not only cast doubt on the 2020 election but participated in the Jan. 6, 2021, insurrection at the U.S. Capitol, refused to concede until all the votes were counted.

In normal times, if we can remember back that far, contests for the office of secretary of state were sleepy affairs. That was before the advent of election denialism and the proliferation of conspiracy theories about the conduct of election. Our Catholic concern for truth points the path of moral responsibility in these races.

On this front, the results were mostly, but not completely, good. In Michigan, election denier Kristina Karamo was defeated by incumbent Joycelyn Benson. In Arizona, another election denier, Mark Finchern, lost to Democrat Adrian Fontes, as did election denier Jim Marchant again Democrat Francisco Aguilar in the swing state of Nevada.* The most important result was in Georgia, where incumbent Republican, and Trump 2020 nemesis, Brad Raffensperger won reelection handily. Any Republican secretary of state who was willing to stand up to Trump, defeat a Trump-backed candidate in the GOP primary and go on to win statewide is even more valuable to the future of democracy than having a Democrat in that post.

It will be interesting to see how Trump reacts to these results. He must know it was a terrible night for him, that his candidates fared poorly, losing contests they should have won in a normal midterm election. He knows, too, that one of the night's biggest winners was his most likely challenger for the 2024 GOP presidential nomination, Gov. DeSantis, who traffics in a similar faux-populist style, but who won reelection convincingly Tuesday night.

It will also be interesting to see how the U.S. bishops react to these midterm results. It is astonishing that the pro-life movement was so ill-prepared for the post-Roe political landscape. One wonders if they, like the Democratic Party, are taking the allegiance of Latinos for granted. And we will find out at the Nov. 14-17 bishops' fall assembly if they are as prepared to defend American democracy as Cardinals James Gibbons and George Mundelein and Francis Spellman once were.

The country could scarcely be more divided. Margins of victory are so small, the representatives on the extremes can exert enormous influence over the processes of governance. I confess I shall likely take a naughty pleasure in watching Rep. Marjorie Taylor Greene assert herself against the likely next speaker of the House, Rep. Kevin McCarthy. She becomes to the GOP what Sen. Joe Manchin has been for Senate Democrats, the constant thorn in the side, with this difference: At least Manchin tried to pull his party to the center.

American democracy is limping right now, as it has limped before. In the 1850s, the federal government proved unequal to the sectarian and moral challenge posed by slavery. In 1877, the end of Reconstruction served the immediate needs of various politicians, but it set the country back a century in its fight for racial justice. In the 1920s, the nation's politics could not resist the lure of xenophobia and laissez-faire fortunes. All three of those episodes ended differently: in war, in indifference and in Depression.

However our moment of sociopolitical crisis ends, there is no reason to think it will be pretty. Eventually, however, leaders emerged — Abraham Lincoln, the Rev. Martin Luther King Jr. and Franklin Delano Roosevelt — who led a democratic renewal. We lift our eyes unto the hills, whence cometh our help, says the psalmist, but that help hasn't come yet.

*This story has been updated with the final results from this Nevada race.