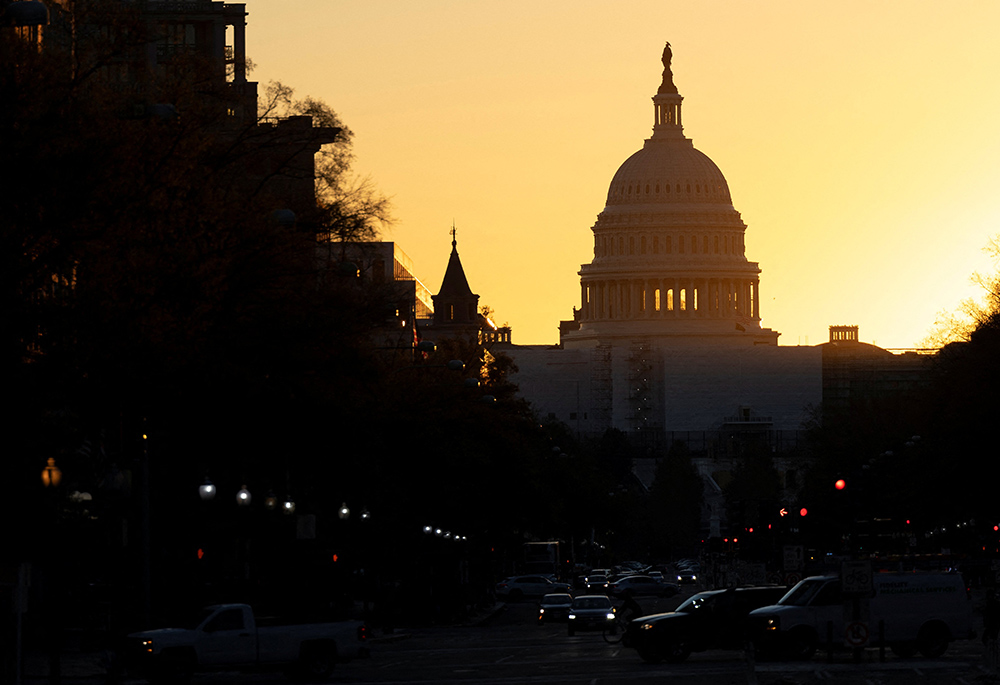 The sun rises over the U.S. Capitol Nov. 9 in Washington, the day after Election Day. (CNS/Reuters/Tom Brenner)

Last week, the 26th annual Festival of Faiths was celebrated in Louisville, Kentucky. One of the nation's leading interfaith events, the festival grew out of the renewal and rebirth of the Cathedral of the Assumption and the surrounding neighborhood under the leadership of Archbishop Thomas Kelly. This year, Louisville's new shepherd, Archbishop Shelton Fabre, led the opening ceremony of the festival at the cathedral. His remarks were excellent, appropriate to the interfaith theme without losing their distinctive Christian character. But Fabre won the congregation's heart when, later in the service, the festival chair Owsley Brown spoke from the pulpit, which is in front of the archbishop's cathedra, and expressed his frustration at the need to turn his back to the archbishop so he could continue to speak into the microphone. Fabre got up, and stepped forward so that Brown did not have to continue the awkward looking back. It was a small but telling gesture.

At CNN, a look at exit polls indicated that women were more likely to vote for Republicans in 2022 than they were in the 2018 midterms, as well as among Black, Latino and younger voters. These results may be accurate, but they also seem to cut against the early narrative that young voters propelled the Democrats' better-than-expected showing. My hunch? Exit polls, because of their large sampling, were once the coin of the realm but with the advent of early and mail-in voting, it is getting harder and harder to conduct an accurate exit poll. Good. Polls are one of the ways social sciences have distorted, not enlightened, our way of thinking about politics.

Also, at CNN a report on efforts by Las Vegas' culinary union to make sure ballots were "cured." 9,659 ballots were missing information or contained wrong information, for example, no date or the wrong date, or a signature that did not match the voter's name on file, and could not be counted unless they were cured. The truth of the matter is that Sen. Catherine Cortez Masto owes her win to organized labor, which also was critical to the success of Democratic candidates in Arizona. The overlap between organized labor and the Latino vote in both states is another important angle that has received too little attention.

At The Hill, reporter Rafael Bernal looks at the Hispanic vote in last week's midterms, which varied from state to state. Bernal quotes some Democratic Party strategists, who have a stake in overstating their effectiveness, but Rep. Ruben Gallego, who chairs the Bold PAC, the political arm of the Congressional Hispanic Caucus, is more sober: "South Floridian Latinos are going back to what they were prior to Hillary Clinton, and it looks like we have stemmed the bleeding in Texas, where obviously [Latinos are] still conservative leaning but still Democratic,” Gallego said. Stemming the bleeding is right: Democrats still need to figure out how to deal with "conservative leaning but still Democratic" Latino voters.

In The Washington Post, columnist James Hohmann looks at the Wisconsin gubernatorial contest, in which incumbent Gov. Tony Evers won reelection with, by Badger State standards, a landslide 3.4 percentage point margin. Hohmann says Evers leaned into some boring issues like highway maintenance, which turned out to really matter to voters. The article reminds us that while we look for national trends, each race has distinct, local components.

In The New York Times, Sen. Elizabeth Warren makes the case that last week's midterm results should encourage President Joe Biden and congressional Democrats to go full steam ahead with their agenda. I think Warren — and many commentators — underestimate the degree to which they won because they were facing Republican nominees who could politely be called bonkers. But, at least on economic issues, I hope Democrats listen to Warren and pursue some strong populist policies that rollback the wealth — and consequent power — of our oligarchs.

Politico reports on two election results that cut against the dominant, and lazy, mainstream narrative that abortion catapulted Democrats to victory: In Ohio and North Carolina, contests for the state Supreme Court resulted in wins for candidates opposed to abortion. North Carolina is a swing state, and Ohio was a swing state as recently as 2012. Combined with the failure of voters in Texas, Florida or Ohio (and Wyoming and a bunch of other red states) to punish their governors who had already signed laws that restricted access to abortion, the narrative about abortion and elections need to be a little more nuanced than it has been so far.