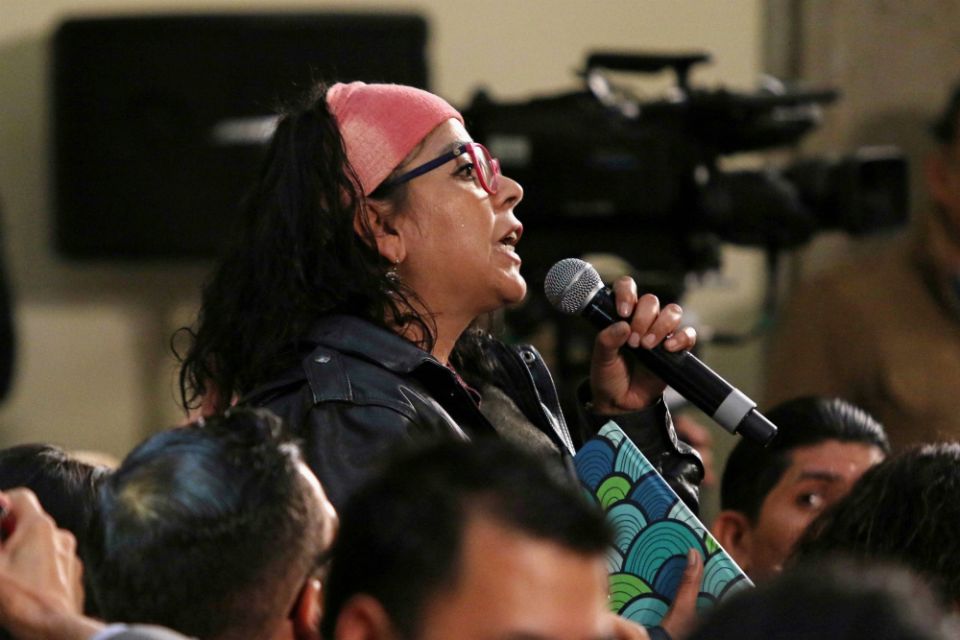 In Mexico today, there is an undeclared war against women and girls. Femicide, the gender-based murder of a woman by a man, is a national emergency in a country where violence against women has been spiraling out of control for years.

The problem has received grossly inadequate attention from state and federal authorities. Anger at the impunity and lack of government response exploded in recent months. The current administration of President Andrés Manuel López Obrador took the unfortunate decision to respond defensively to feminists and women's rights activists, rather than prioritizing the issue, to the detriment of women and girls in Mexico.

On March 8, International Woman's Day, women dressed in purple, black and green demonstrated against Mexico's gender-based violence epidemic. The following day, feminist groups have called for a "day without women" to ramp up the pressure on the government and society to acknowledge and address the horrific femicide emergency gripping the country.

At the center of the activism is a woman who has been independently investigating and chronicling the stories of victims on her blog since 2016. She's also been demonized, belittled, bullied and threatened by many, including top-ranking government officials, Twitter users and members of the media. I spoke with activist, journalist and author Frida Guerrera a day before she went into hiding after an onslaught of increasingly serious threats against her life.

Guerrera recently launched a powerful new website that includes audio and video of victim's family members and activists. According to Voces Perdidas (Lost Voices) — approximately nine women are murdered every day in Mexico, and one in 10 femicide victims is a minor. According to Guerrera's site, more than 3,000 women were murdered last year but only 726 were investigated as femicides. In Mexico City, femicides are increasing in violent areas of the city.

As of March 5 of this year, Guerrera had documented 364 femicides in the country.

Pierson: How did you start your work?

Guerrera: When I think about why I started to do this work, I realize that on the 20th of February of 2016, I began to look for reports about the deaths of women on the internet and I was alarmed. Under the term "femicide" nothing came up. Then "murdered woman," then "disappeared woman." That's how I was able to recuperate 193 registries [of murders of women and girls in Mexico].

Why the 20th of February?

I had an accident: I hurt my foot, I'd finished all my reading and I was looking over some reports about femicides in the country. The idea stayed with me that these reports might always stay as just that: statistics. That's when I said it's time to start looking [for the stories of the victims].

When you speak with the families of the murdered girls and women, what do they say to you?

At the beginning of this work in April of 2016, I realized it wasn't enough for me to just document the girls. Then I started to look for the families. Since 2018, I haven't intervened unless the families ask me to. When I arrive with them, it's an interview, but it's more than an interview because first I have to contain the pain; they're really hurt.

You have to listen to the pain, the impotence, the anger and the blame. They [the families] are filled with blame: blame for not having been close, not having been there in the final moments, for having let her go out, for having sent her to the corner store, etc. All of this I have to listen to. My interviews can last up to eight hours because my time and attention belongs to them [the victims]. I don't take notes, my life partner and collaborator does that for me because I have to give 100% of my attention to the parents.

In my first year doing this in 2016, I only wrote the stories of the girls and women. I didn't investigate or accompany the family members of the victims to court appearances. Then the impunity and the lack of response by the authorities prompted me to start investigating what happened to these victims.

The first girl that I investigated and helped give her an identity was Karina Reyes Crescencio. Karina was a girl who disappeared from Oaxaca but was found in on the side of a road in Puebla. The mom couldn't file a report because she didn't know how to write; she's 100% indigenous. She didn't know what bus to take or where to go. Two months later, a neighbor accompanied the mom [to file the report].

I did the comparison between the girl who went missing in Oaxaca and the girl found in Puebla. I found the mom and then worked with the authorities to get Karina's body back to her mother, in Oaxaca. And that's how I started investigating.

I used to represent victims of domestic violence in the Aurora Municipal Court in Colorado and at the end of the day I would light a candle and say a prayer for each victim. Is there something you do to let go of the incredible sadness and anger you see and work with every day? What do you do to be able to sleep?

During the first few months, I couldn't sleep. I was reading news all day, every day. I would imagine them — that kills me to imagine them in their last moments, their last seconds. It would break me; I could hear them. I was still living in Oaxaca then.

Related: In bone-chilling numbers, femicides in Mexico are a national emergency

When I started speaking with the families, I realized that what I was feeling was minimal compared to their pain. Everything hurts me but I can never show myself to be sadder than the mothers because I am the extension of their voice — that's why I called the group "Voices of the Absent" (Voces de la Ausencia). I speak with the girls and women in my heart. I have rituals: I light a candle and put up a photo of them when they were alive as I write their stories.

I always ask the mothers, "What do you want me to say?" I cry with them [the mothers] if I need to, but I have to be strong for them [the families]. When they [the families] see me they cry, because it's a release for them. But we even come to laugh later. Our lives are linked.

Do you feel safe?

What do you mean by safe?

In the sense of protection?

No. As soon as I started working in documenting grievous violations of human rights, I knew that it was a risk. I'm not a martyr either, but I think the state has the obligation to provide me with protection so I can continue doing the work that I do. For myself, I'm not scared — it frightens me very much the idea that harm could come to my family or people that I love, but for myself, no, I'm not scared.

What do you want people to understand about the issue of femicide in Mexico?

There are two different points. First, as a society, we need to come back to empathy. We demand a lot from the government and it's the government's obligation to provide us with answers, but as a society we have failed. There are no values, no principles, rules or limits. We are in the middle of intolerant generations who can't control their impulses. There are an infinite number of situations that we have to control as a society — that we have to rectify.

Second, on the part of the government, there needs to be a serious effort to implement public policies that promote security for all girls and women.

[Carli Pierson is a human rights attorney and freelance writer living in Mexico.]