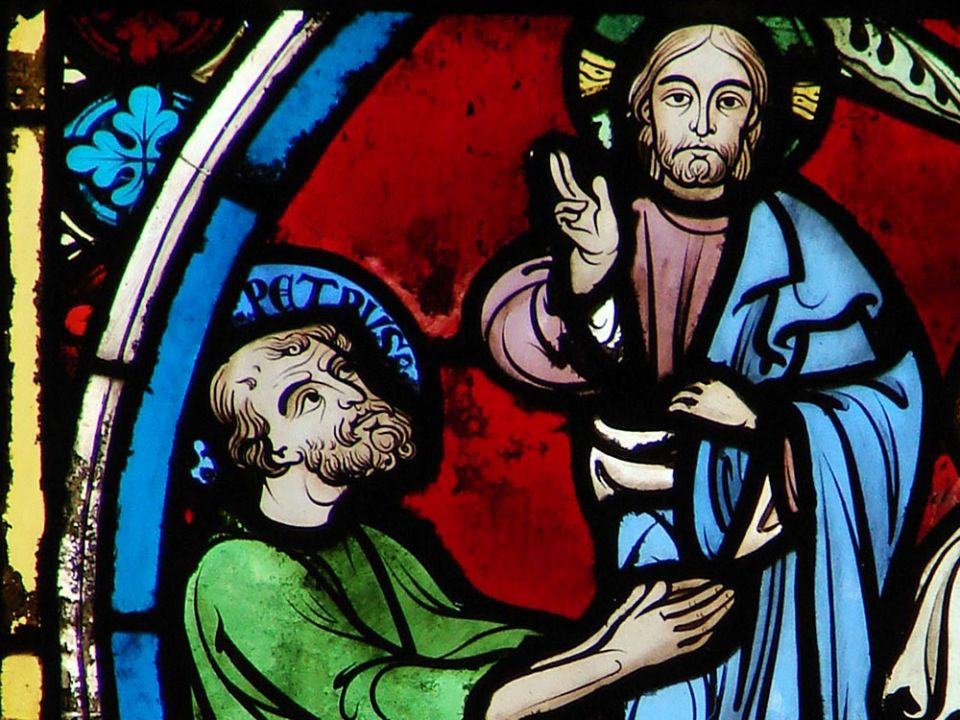 Having doubted Jesus' instruction to lower the nets, and then seeing the enormous catch of fish they achieved, Peter says to the Lord, "Depart from me, O Lord, for I am a sinner." Pope Francis calls these words "an inheritance that the first Pope left to the Popes and the Bishops of the Church." (Wikimedia Commons/Vassil)

When Cardinal Reinhard Marx published his remarkable and unexpected letter of resignation as archbishop of Munich and Freising on June 4, religion reporters, theologians and members of the hierarchy jumped on the phone to try and make sense of it. Some writers foolishly rushed into print with analysis. But one thing emerged from those discussions: Everyone thought Pope Francis would necessarily have to accept the resignation.

Last week, Francis did not accept the cardinal's resignation. Again he surprised us. Not only that, his response to the German cardinal was so spiritually rich, and so provocative in its understanding of the source of episcopal authority, it could well serve as the starting point for the discussion the U.S. bishops will have at their spring meeting later this week. The pope's vision might yet save the bishops' conference from its worst instincts. 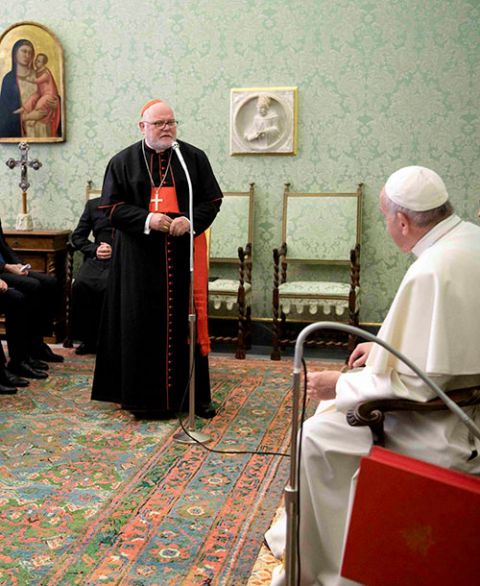 Cardinal Reinhard Marx of Munich and Freising addresses Pope Francis during an audience in the Apostolic Palace at the Vatican April 4, 2019. (CNS/Vatican Media)

Marx's resignation was, as the cardinal explained, prompted by his felt need to take responsibility for the church's "catastrophic" mishandling of the clergy sex abuse crisis. Even though he himself has not been charged with covering up abuse, Marx said he intended to resign "to make clear that I am willing to personally bear responsibility not only for any mistakes I might have made but for the Church as an institution which I have helped to shape and mold over the past decades."

In refusing the resignation, the pope concurred with Marx that the church's mishandling of sex abuse allegations was a "catastrophe" and he reflected on the need to avoid simplistic remedies.

He wrote, "The ostrich policy does not lead to anything…sociological isms, psychological isms are useless." He warned against relying on efforts to protect the reputation of the church or to consider overmuch what the media thinks.

He uses the Spanish word "fecundo" to say that "taking responsibility" for the crisis is the only fecund way forward. We usually translate fecundo as "fruitful" but the word "fecund" is more precise, containing the ideas of abundant fertility and new growth.

The most powerful section of the letter, however, focuses on St. Peter's words to Jesus in Luke's Gospel (5:8). Having doubted Jesus' instruction to lower the nets, and then seeing the enormous catch of fish they achieved, Peter says to the Lord, "Depart from me, O Lord, for I am a sinner." Francis calls these words "an inheritance that the first Pope left to the Popes and the Bishops of the Church."

Francis returned to this passage at the conclusion of this extraordinary letter:

If you are tempted to think that, by confirming your mission and not accepting your resignation, this Bishop of Rome (your brother who loves you) does not understand you, think about what Peter felt before the Lord when, in his own way, he presented the resignation: "Get away from me, I am a sinner," and listen to the answer: "Tend my sheep."

Actually, in Luke's Gospel, Jesus goes on to tell Peter he shall become a fisher of men and the "tend my sheep" line is found at the end of the Gospel of John. But no matter. The point is clear: The apostolic mandate — and only true guide for a bishop or any Christian — is to begin with the self-knowledge that I am a sinner and turn to the Lord who alone brings forgiveness of sins.

On Wednesday, the U.S. bishops will begin a three-day meeting on Zoom. They, too, are in crisis. Yes, like the church in Germany, the self-inflicted wounds of clergy sex abuse have robbed the bishops of much of their moral authority. But their immediate problem is not that. Nor is it that a Catholic in the White House does not support criminalizing abortion. Nor is it that some Catholics do not understand the finer points of eucharistic theology.

No, the problem the U.S. bishops face is that they are at each other's throats.

Our bishops face a choice: Do they want a real dialogue, which will require waiting until they can meet in person in November, or do they want to force the issue and further divide the conference?

At their upcoming meeting, they can't really begin to heal the divisions that have emerged. Zoom calls are ill-suited for the kind of interpersonal communication essential to overcoming estrangement. So the proposal by Archbishop José Gomez, the conference president, to proceed with a vote on drafting this contentious document on the Eucharist, as if a Zoom meeting is not really different from a regular one, and as if the divisions this issue has exposed were not more conspicuous and deeper than any in recent memory, is an example of playing the ostrich.

Our bishops face a choice: Do they want a real dialogue, which will require waiting until they can meet in person in November, or do they want to force the issue and further divide the conference? The Vatican has made it clear that they want a genuine dialogue, not a Zoom call, as I expect the nuncio's talk will make clear.

A significant number of bishops have written to Gomez urging delay. If he proceeds, he will have no one to blame but himself for caving to the culture warriors who are placing politics ahead of theology and who are willing to break the U.S. bishops' conference to achieve their goals.

The U.S. bishops should read the pope's letter to Marx — and re-read Francis' letter to them as they began their retreat in 2019, which touched on some of the same themes. The pope understands that unity among the bishops is a sign of proper discernment, and the lack of such unity is a sign of a willfulness that will not prove ecclesially fecund.

Francis also understands something else that our U.S. bishops need to grasp. They began this push for a document by forming a "working group" to consider how to handle Joe Biden's presidency, that is, they started by examining the sin of another. Francis encourages them to start by examining their own sinfulness. That is the path to restoring the credibility of the church. That is the only path.

At this start of the third millennium, the ecclesial model bequeathed by the Catholic Reformation of the 16th century has lost credibility. If you examine one of the artistic highpoints of Renaissance Rome, the dome of St. Peter's Basilica, the inside of the drum on which the dome sits has an engraving — the letters are 2 meters high! — that reads, "Tu es Petrus et super hanc petram aedificabo ecclesiam meam et tibi dabo claves regni caelorum." You are Peter, and upon this rock I shall build my Church, and I will give you the keys to the kingdom of heaven. The idea was that Peter's confession of faith in Matthew 16 was the basis of the power and prestige of the papacy.

Francis instead proposes, in his letter to Marx, that in our day it is St. Peter's confession of sin in Luke 5 that grounds the apostolic credibility of his office and the office of bishop. It is after Peter has failed — and failed again and again, even denying Jesus three times — that the risen Lord gives him his final commission: "Tend my sheep."

Let us hope the bishops of the United States will use their virtual meeting this week to hear the challenge, and the hope, in the vision offered them by the successor of St. Peter.

Column | Can the US bishops grasp Pope Francis' ecclesial vision?