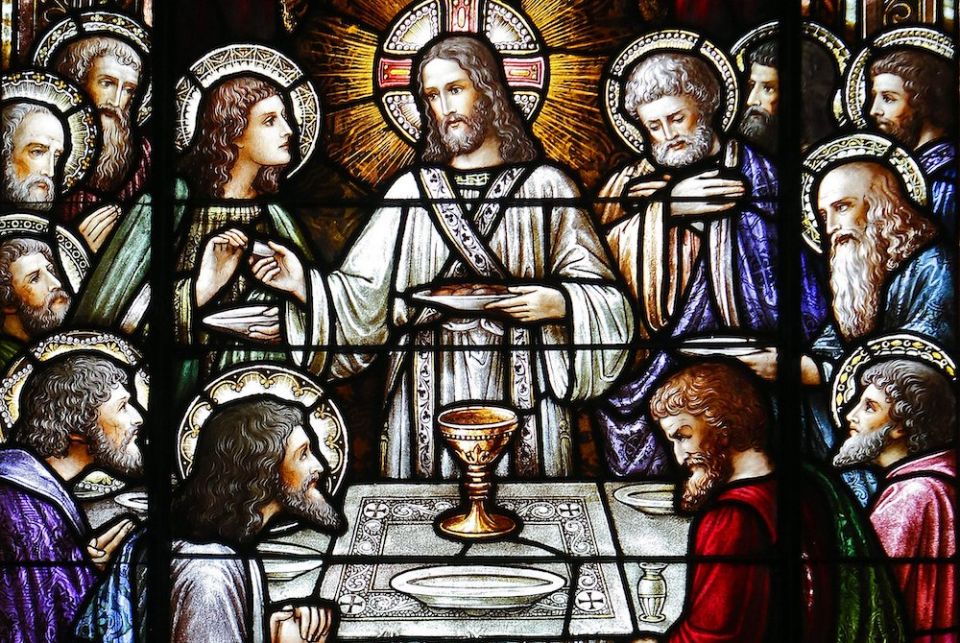 Instead of engaging the parts of Cardinal Luis Ladaria's letter that are most important, most theologically and ecclesially challenging, and that seek to brake the rush to deny the president Communion, the conservative Catholic media has decided to behave as if nothing has changed. Image: detail of stained-glass window at St. Aloysius Church in Great Neck, New York. (CNS/Gregory A. Shemitz)

The official organs of conservative Catholic opinion have engaged in propaganda the past couple of days that would make the Russian paper Pravda proud. The aim was to convince their readers that the letter from Cardinal Luis Ladaria, prefect of the Congregation for the Doctrine of the Faith, to Archbishop José Gomez, president of the U.S. Conference of Catholic Bishops, did not say what it plainly said: Slow down and rethink this reckless rush to adopt a national policy barring U.S. President Joe Biden from Communion, that our bishops' conference is not the only conference in the world, and that abortion is not the only issue with claims on the conscience of a conscientious Catholic. Instead, denial was the order of the day.

The National Catholic Register ran a story from the Catholic News Agency, both owned by EWTN, which had a curious headline: "Congregation for the Doctrine of the Faith Highlights Doctrinal Note on Catholics in Politics in Letter to US Bishops on Eucharistic Coherence."

Well, yes, the Ladaria letter did highlight the 2002 doctrinal note, but to what end? The headline writer at the Spanish website Religion Digital was able to figure it out: "El Vaticano frena los intentos de los obispos norteamericanos por excomulgar a Biden," that is, "The Vatican brakes the aim of those North American bishops who want to excommunicate Biden." And the Catholic News Service, the official news service of the U.S. bishops, ran an excellent story by Cindy Wooden headlined: "Cardinal Ladaria cautions US bishops on politicians and Communion."

Not until the eighth paragraph does the Register/CNA story get to the heart of the matter, that Ladaria was reminding Gomez that during the 2019-2020 ad limina visits, the Congregation had advised proceeding with a national policy only if the effort would build unity among the bishops. And, seeing as the opposite appeared more likely, Ladaria set forth a series of hurdles — any one of which is enough to bring the crusade to deny Biden Communion to an end.

EWTN's "Nightly News" program did not amend its broadcast on the day the story broke but ran what by then seemed an ironic, and sad, interview with San Francisco Archbishop Salvatore Cordileone about his pastoral letter on the subject. The second night, the show referenced the Ladaria letter but directed viewers to the Register for more detailed information. In short, they punted.

“The bishops should affirm as a Conference,” Card. Ladaria told Archbishop Gomez, “that ‘those who are directly involved in lawmaking bodies have a grave and clear obligation to oppose any law that attacks human life.’”https://t.co/kqa45csKOy

Ed Condon, formerly with Catholic News Agency and now with The Pillar, joined in the manipulation effort launched by his previous employer. He tweeted: "The bishops should affirm as a Conference," Card. Ladaria told Archbishop Gomez, "that 'those who directly involved in lawmaking bodies have a grave and clear obligation to oppose any law that attacks human life.' " Again, that is true but not exhaustive. The Pillar's unsigned coverage of the letter at least mentioned the points at which Ladaria was essentially demanding a course correction, even if it did not admit that was what was happening.

At Catholic Culture, Phil Lawler focused on what Ladaria did not say, specifically, "Cardinal Ladaria did not say that it would be wrong for a diocesan bishop to bar a pro-abortion Catholic from receiving Communion." (emphasis in original) He notes Ladaria only cautioned about the challenges of forming a national policy.

Lawler than moves to the same quote from the 2002 doctrinal note that Condon had cited, but what is clear is that Lawler thinks the "grave and clear obligation to oppose any law that attacks human life" is a reference only to abortion, which is not the case. Only an obscurantist would deny that climate change is now a clear and present threat to human life, to individual lives of those killed by increasingly frequent extreme weather events, those who die when migrating due to rising sea levels, and, most ominously, the life of humanity as a whole.

In an attempt to inoculate himself, Lawler writes, "Cardinal Ladaria said that a statement from the episcopal conference should not convey the impression 'that abortion and euthanasia alone constitute the only grave matters…' But no one — certainly no bishop — makes any such claim."

Excuse me, but the adjective the U.S. bishops employed in their document on voting, "preeminent," was taken to mean "determinative" throughout the conservative Catholic mediascape and among certain bishops. Indeed, read Cordileone's pastoral letter, or that of Phoenix Bishop Thomas Olmsted. For both, it is clear that abortion is the determinative issue, with nods to opposing same-sex marriage thrown in as well.

First Things published an essay by George Weigel that in no way reflected the challenge posed by the Ladaria letter. Weigel opined:

Catholics who promote or who refuse to take effective action against grave offenses against human dignity (among which Gaudium et Spes listed abortion, euthanasia, and violations of the human person through mutilation) not only fail to contribute to the common good while doing severe damage to society; they also declare themselves incoherent Catholics, who are, objectively, not in full communion with the Church.

Weigel still can't bring himself to acknowledge that some of the people he has voted for also pursue policies that constitute "grave offenses against human dignity." He continues to demand the church's pastors have "an obligation to bring this challenge of coherence," as do I, but the question is how the pastor brings it to the politician's attention, and whether an episcopal conference has much of a role in that matter.

Do you see a pattern here? Instead of engaging the parts of the Ladaria letter that are most important, most theologically and ecclesially challenging, and that seek to brake the rush to deny the president Communion, the conservative Catholic media has decided to behave as if nothing has changed. As one friend said, "You would have thought Ladaria was sending a recipe for sourdough starter."

This denialism provokes a sense of déjà vu. In 2018, the U.S. bishops' conference was determined to confront the scourge of clergy sex abuse and, reflecting the pragmatism of American culture, had a raft of concrete proposals for adoption at their November meeting. In the weeks before that meeting, officials with the Holy See had encouraged the U.S. bishops to slow down, not to go out on a limb when a worldwide summit on the issue was scheduled for Rome the following February. The leadership of the conference — such as it is — ignored Rome's warnings and plowed ahead. 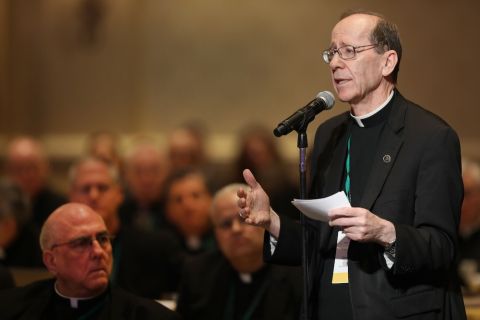 Phoenix Bishop Thomas Olmsted speaks from the floor Nov. 14, 2018, at the fall general assembly of the U.S. Conference of Catholic Bishops in Baltimore. (CNS/Bob Roller)

On the very eve of the meeting, Cardinal Marc Ouellet, prefect of the Congregation for Bishops, took out his chainsaw and sawed off the limb, writing to Cardinal Daniel DiNardo, then-president of the U.S. bishops' conference, demanding that no votes be taken on the ill-considered proposals. It was a brutally embarrassing amateur hour at the USCCB.

The question for Archbishop Gomez is whether he wants the zealots in the conference to put him in the same embarrassing situation DiNardo found himself in. Will the conference follow the conservative press out on a limb, or will Gomez finally exercise some leadership and say, as Ladaria said, "Enough!"? It would be foolish to expect the mild-mannered Gomez to attempt to lance the boil of zealotry and lousy theology that has emerged among his brother bishops and is echoed in the right-wing media echo chamber.

But it is not too much to expect him to remind his confreres of the deeper meaning of their 2018 chastisement. The issue now is not really whether or not Biden should go to Communion, just as then the issue was not really how to confront the scourge of clergy sex abuse. The issue is: Whence comes the credibility of a bishop — and of a bishops' conference?