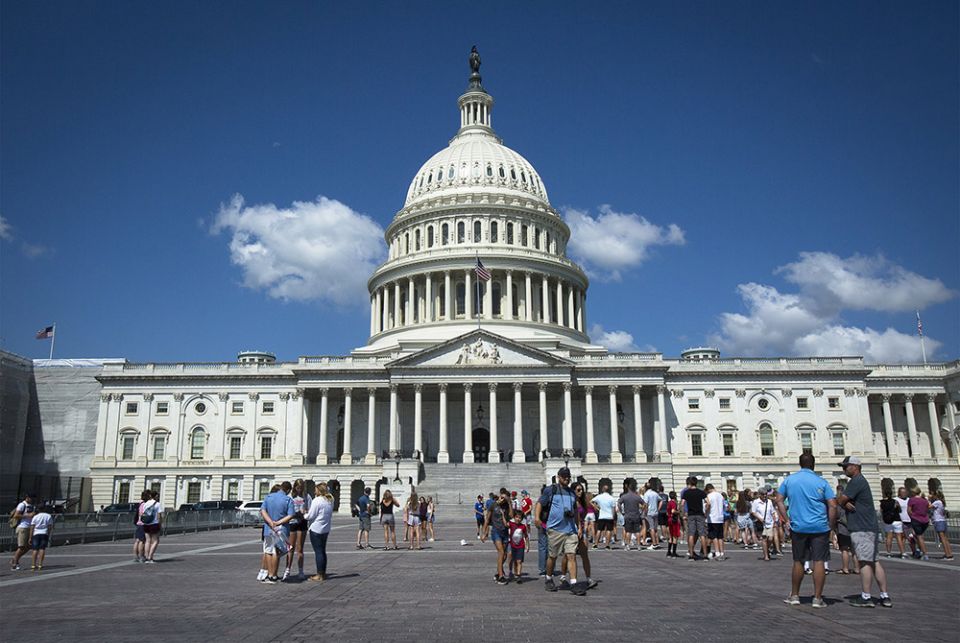 The U.S. Capitol is seen in Washington in this file photo. (CNS/Tyler Orsburn)

Last week, my colleague Christopher White published two articles that provided readers with basic information about Catholic groups working for and against the reelection of President Donald Trump. That reporting raises the issue of how deeply and indelibly the divisiveness of our political life has infected our ecclesial life.

I raised this issue back in March, when Archbishop Jerome Listecki of Milwaukee affirmed that the group meeting in his city, "Catholics for Trump," had no affiliation with the Catholic Church, I posed the question: Should the church actively discourage such partisan groups? And my short answer was yes.

The column went on to explain some of the complexities in the long answer, including a quote from former Duquesne Law School Dean Nicholas Cafardi, one of the co-chairs of Catholics for Obama, that we should "explain — even publicly — how our Catholic values have informed our vote."

He has a point, of course but as I noted at the time, I remain ambivalent. Whatever these groups achieve by way of articulating the application of values drawn from Catholic teaching to the political life of the nation, they also tend to contribute to the breaking down of the unity of the church.

Jesuit Fr. Mark Massa, the director of the Boisi Center for Religion and American Public Life at Boston College, often notes that the opposite of Catholicism is not Protestantism, it is sectarianism. So, to modify the question I posed in March: Is there a way for Catholics qua Catholics to become politically involved that does not contribute to sectarianism?

Already, we can identify ways of witnessing to the faith in the public square that actually contradict the Catholic faith. We can begin articulating some out-of-bounds behavior that might help us resolve the ambivalence.

When former Notre Dame football coach Lou Holtz told the Republican National Convention that Joe Biden and those who support abortion rights are "Catholics in name only" he crossed an obvious line. As Notre Dame president Fr. John Jenkins said in a statement disassociating the university from Holtz's remarks, "We Catholics should remind ourselves that while we may judge the objective moral quality of another's actions, we must never question the sincerity of another's faith, which is due to the mysterious working of grace in that person's heart." So, the first rule of thumb: Never question another person's faith, even if you question their positions.

A different, but equally problematic witness might now be called the "Father Altman approach," which claims no good Catholic can support a certain candidate or belong to a certain party. Fr. James Altman of La Crosse, Wisconsin, released a video in which he asserted, among other things, "You cannot be Catholic and be a Democrat. Period." 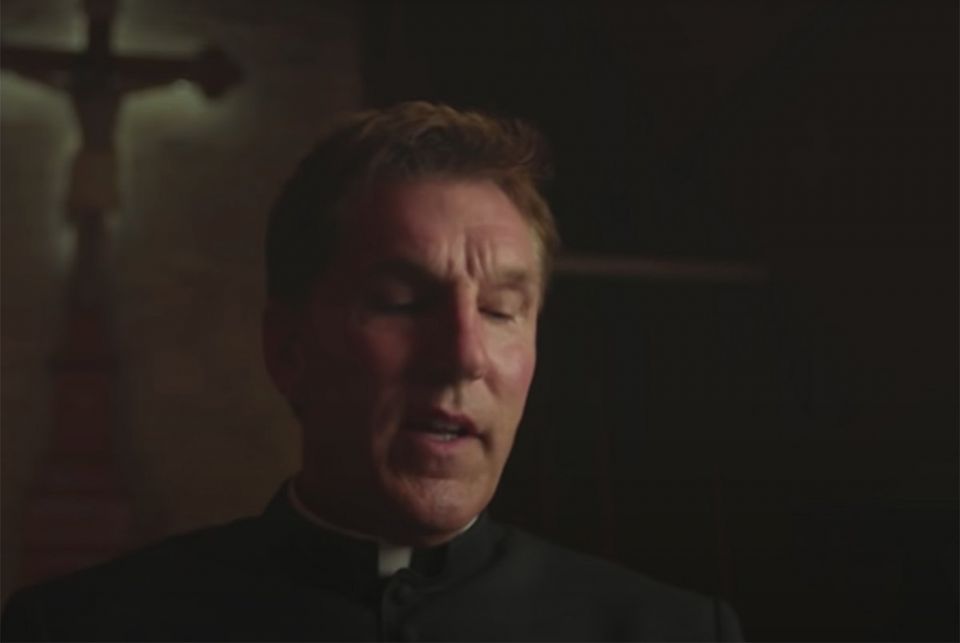 Fr. James Altman, pastor at St. James the Less Catholic Church in La Crosse, Wisconsin, is seen in his YouTube video. In the clip he attacks Catholics who are Democrats. (CNS/YouTube screengrab)

His ordinary, Bishop William Callahan issued a statement indicating he was fraternally correcting Altman, as the Scriptures prescribe, but that canonical penalties could follow. "The tone Fr. Altman offers comes off as angry and judgmental, lacking any charity and in a way that causes scandal both in the Church and in society," Callahan said. "His generalization and condemnation of entire groups of people is completely inappropriate and not in keeping with our values or the life of virtue."

This is, regrettably, a bipartisan problem. On Aug. 10, Social Justice Sr. Simone Campbell of the Catholic social justice lobby Network said: "In this time of crisis we are called to speak clearly: Catholics cannot support another presidential term for Donald Trump and be true to their faith." I confess that I have a hard time making an argument that a vote for Trump can be reconciled with fidelity to the Catholic faith, but I do not have a hard time believing others feel the same way about Biden. Liberal Catholics have been highlighting the church's teaching on the significance of conscience for decades and Trump should not cause them to abandon it.

In 2009, when Jenkins invited President Barack Obama to speak at the graduation ceremonies at Notre Dame and to receive an honorary degree, all hell broke loose. When Ambassador Mary Ann Glendon declined to accept the Laetare Medal, and deliver the speech that accompanies it, a former Laetare winner, Judge John Noonan, did the honors and his speech was an ode to conscience:

By conscience, as you graduates of 2009 know, we apprehend what God asks of us and what the love of our neighbor requires. More than the voice of your mother, more than an emotional impulse, this mysterious, impalpable, imprescriptible, indestructible, and indispensable guide governs our moral life. Each one is different. You may suggest what my conscience should say, but you cannot tell me what my conscience must say.

So, Rule No. 2 is: Allow other people to form their own conscience and follow it. Challenge their ideas as you see fit but do not suggest it is impossible for the grace of Christ to reach into the heart of someone who holds differing political views from your own.

At this stage of the presidential race, a third rule comes into focus: Shed light, not heat. You should read some of the emails I get from political organizations that wrap themselves in their Catholicism! Some repeat demonstrable falsehoods, others seek to give a pass to a Catholic politician on issues about which the church's teaching is unambiguous, some are just vile and others stretch the truth as if it were taffy. So, Rule No. 3 invites us to ask these questions: Do my words serve as leaven in a divided society? Do they build up culture or tear it down? Would an impartial observer discern love of neighbor in my stance?

I know, I know. You are thinking: Physician, heal thyself! I admit that judgmentalism and the desire for the mot juste even at the expense of Christian charity are, for the columnist, occupational hazards. I confess the sin of delectatio morosa with frequency. Guilty as charged and the Lord have mercy on my soul.

Let us also note that Altman is not a columnist, but a priest, and judgmentalism should not be an occupational hazard in that vocation. If the bishops want to hold the church together, they need to do more than tweak their documents and statements. They need to ask how someone so filled with vitriol got through seminary. And bishops should make clear that clergy and religious should not be involved in politics the way laymen and laywomen are: It is the worst kind of clericalism and directly opposed to the ecclesiology of Vatican II that envisioned the laity bringing the faith into every avenue of culture.

Here is something that, I believe, is the essential starting point if we want our faith to transcend the political polarization of the culture: Call out those on your own side of the partisan divide who prostitute the faith for political gain. Common ground initiatives quickly descend into platitudes, but challenging those on your own side of the political divide who cloak themselves in the mantle of Catholicism while ignoring core moral tenets helps create space in the center for a nonsectarian expression of the faith.

You do not have to be as extreme as, say, Valor America or Catholics for Choice, to be prostituting the faith. Stop making excuses for Biden's position on abortion and Trump's position on immigration, climate change and the death penalty. Do not be complicit with power or, as the psalmist has it, put not your trust in princes (Psalm 146).

Is there still some ambivalence about where to draw the lines? Yes, absolutely. I would add that Trump's anti-democratic words, if matched by deeds, put the demands of faith in an altogether different place. If I were the nuncio, I would send every bishop a copy of a photograph from the 1930s of bishops making nice with Hitler and Mussolini. It is not a good look.

The rest of us should meditate on the fact that there is no empire in the history of the world that has lasted forever, and that the American empire will someday recede and give way to a different conglomeration of power. On the other hand, the Lord himself vouchsafed to us that the gates of Hell will not prevail against his holy church.

Consciousness separates me from creation and bonds me to it

Your thoughts on the US bishops' Communion document

The Republican health care bill is not good for our country