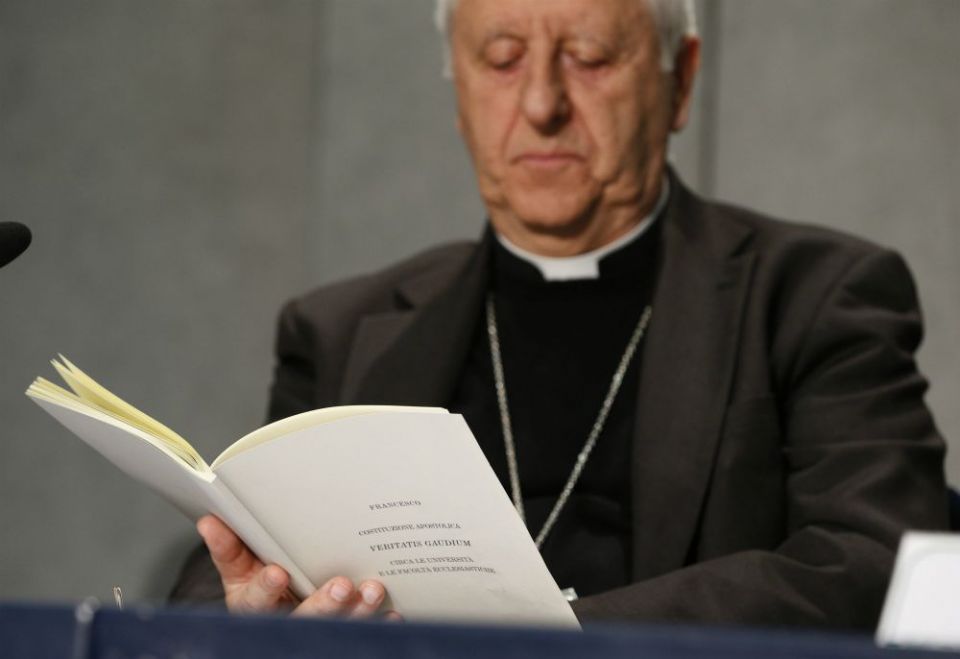 Cardinal Giuseppe Versaldi, prefect of the Congregation for Catholic Education, reads a copy of Pope Francis' apostolic constitution, "Veritatis Gaudium" (The Joy of Truth), during a news conference at the Vatican Jan. 29. The pope has issued revised norms for universities that grant Vatican-recognized degrees. (CNS/Paul Haring)

With the papal trip to Chile and Peru dominating Vatican headlines and the State of the Union address capturing the nation's attention, it was easy to miss the fact that Pope Francis issued an apostolic constitution last week, Veritatis Gaudium, ("THe Joy of Truth"), on the subject of ecclesiastical universities and faculties, that is, schools that grant pontifical degrees. Popes come and go, but documents tend to have lasting impact, and this one is no exception as it brings up to date the last apostolic constitution on this topic, Sapientia Christiana, issued in 1979.

The most obvious thing about this text is how self-consciously it is rooted in the decrees of Vatican II and the magisterium of previous popes, yet it brings a certain Francis flair and perspective. The opening paragraph reads:

The joy of truth (Veritatis Gaudium) expresses the restlessness of the human heart until it encounters and dwells within God's Light, and shares that Light with all people. For truth is not an abstract idea, but is Jesus himself, the Word of God in whom is the Life that is the Light of man (cf. Jn 1:4), the Son of God who is also the Son of Man. He alone, "in revealing the mystery of the Father and of his love, fully reveals humanity to itself and brings to light its very high calling."

This not only quotes from Vatican II, it quotes from the single passage most quoted by St. Pope John Paul II in his many writings, Gaudium et Spes (#22). And it is that paragraph that is most central to the theology of Henri de Lubac and the Communio school of theology that so influenced Pope Benedict XVI.

Apart from its magisterial and theological pedigree, the claim is astounding on its own: For us Catholics, and for our intellectual life, not just our prayer life, the truth is a person not a concept, a particular person in history, Jesus of Nazareth, the Christ, the true God from true God who became flesh and, so, reveals us humans to ourselves. I have read GS #22 probably a thousand times, and it still gives me goosebumps.

GS#22 also gives, as it should, an awareness of how different our Christian way of looking at the world must be from the way a secular person would view the world. There is the old canard that there is no Catholic way to make a hamburger, or that 2 + 2 = 4 in all religions, but for the Christian, we look at all reality differently because the Incarnation has changed our understanding of ourselves who do the perceiving and of the creation we perceive. Precisely as created, we look at the world and see gift, not data. We may also, and subsequently, see data but first we must see gift.

In the second chapter of the text, we see how Pope Francis is, as I have noted before, so very keen on reviving the patrimony of Blessed Pope Paul VI: "Pope Paul VI's Evangelii Nuntiandi and Populorum Progressio, and John Paul II's Redemptor Hominis, issued only a month before the promulgation of the Apostolic Constitution, are milestones along the way which led from these directives of Vatican II to Sapientia Christiana." This is no mere statement of provenance. He is linking evangelization, Catholic social teaching, and soteriology, all as critical building blocks of Catholic ecclesial education, seeing them as an integral whole, albeit one quite different from the pre-Vatican II integralism that sought to keep the church separate from the world. When he writes, "Populorum Progressio thus interprets with prophetic vision the social question as an anthropological question, one affecting the fate of the entire human family," he is calling attention to an interpretive key for all post-conciliar teaching, which is why it is so frustrating that Catholic social teaching remains the church's best kept secret.

Pope Francis' distinctive touch emerges in the third section. He writes: "At the same time, they are called to be a sort of providential cultural laboratory in which the Church carries out the performative interpretation of the reality brought about by the Christ event and nourished by the gifts of wisdom and knowledge by which the Holy Spirit enriches the People of God in manifold ways — from the sensus fidei fidelium to the magisterium of the bishops, and from the charism of the prophets to that of the doctors and theologians." It is hard to imagine St. Pope John Paul II using the phrase "providential cultural laboratory" or mentioning the sensus fidei fidelium alongside the magisterium of bishops!

The second criterion is pure Francis: "A second guiding criterion, closely linked to and flowing from the first, is that of wide-ranging dialogue, not as a mere tactical approach, but as an intrinsic requirement for experiencing in community the joy of the Truth and appreciating more fully its meaning and practical implications." How often do we hear apologists for the faith describe dialogue in precisely the tactical terms that Pope Francis here states are not only insufficient but an evangelical prophylactic keeping us from the genuine fruit of dialogue? Check out this video by Bishop Robert Barron. Go to minute 3:00 for an example of the "tactical approach" and, later, again, at 6:50.

The third criterion could have been penned by Pope Emeritus Benedict XVI: "inter-disciplinary and cross-disciplinary approaches carried out with wisdom and creativity in the light of Revelation. What distinguishes the academic, formative and research approach of the system of ecclesiastical studies, on the level of both content and method, is the vital intellectual principle of the unity in difference of knowledge and respect for its multiple, correlated and convergent expressions." The need to synthesize all our intellectual endeavors "in the light of Revelation" is too often the thing missing from our schools of higher learning, where you get credit — and you get published — when you break through an existing synthesis, not when you seek to synthesize your learning in light of the truth that has been revealed.

"A fourth and final criterion," Pope Francis writes, "concerns the urgent need for 'networking' between those institutions worldwide that cultivate and promote ecclesiastical studies, in order to set up suitable channels of cooperation also with academic institutions in the different countries and with those inspired by different cultural and religious traditions. At the same time, specialized centers of research need to be established in order to study the epochal issues affecting humanity today and to offer appropriate and realistic paths for their resolution." I concur with both parts. It is more than remarkable how little we gringos know about the theology of the people that has so informed Pope Francis' theology. And the reference to "epochal issues affecting humanity" refers to the environmental and cultural crises of our time. I wonder how many seminaries have devoted serious time to teaching their inmates about environmental issues? Reading this section, I appreciated as never before how deeply influenced Francis has been by Benedict XVI.

Reading this constitution, I recalled something I had forgotten. When I first read Amoris Laetitia, I was struck by the fact that the pope cited the statements of the Orthodox patriarch, various episcopal conferences and the reports from the synods more than previous apostolic exhortations, but also that Francis was keen to demonstrate how Amoris was a development of the teaching of Vatican II and his predecessors in the Chair of Peter. With all the controversy, I had forgotten this latter point. To see Francis as a clear break from his predecessors in style is undeniable, even in terms of theological reference points, but in terms of doctrine? No. He, like they, is working from revelation, from tradition, and from the decrees of Vatican II. An emphasis may change here, or a new theme be introduced there, but this new constitution is more evidence that Francis is no radical. He is the successor of Peter, just like his predecessors.