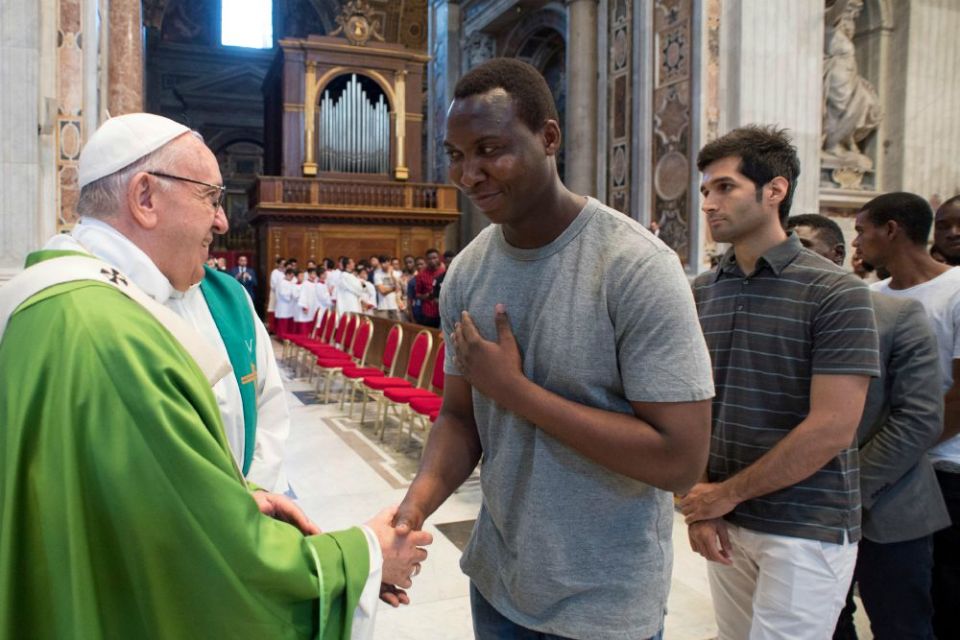 Pope Francis greets a man as he celebrates a Mass for migrants in St. Peter's Basilica at the Vatican July 6. (CNS/Reuters/Vatican Media handout)

Yesterday, I called attention to an article by Robert Mickens about Pope Francis' recent address at a theological symposium in Naples. Eleven days ago, my colleague Joshua McElwee reported on the pope's homily at the Mass celebrating the feast of Sts. Peter and Paul. Monday, the pope marked the sixth anniversary of his trip to Lampedusa with a Mass for migrants, at which he delivered the sermon. These three texts highlight this pope's penetrating theological vision, why it is so suited to our times, and why it so disturbs a certain kind of American Catholic.

The talk at Naples was, as Mickens noted, remarkable because of the pope's focus on theology in the Mediterranean as it is today, not only as the historic source of Greco-Roman philosophic ideas which so shaped the early church. The conference was considering theology in the wake of Francis' apostolic constitution Veritatis Gaudium that dealt with the renewal of ecclesiastical faculties and universities. In Naples, he said:

When in the Foreword of Veritatis Gaudium the contemplation and presentation of the heart of the kerygma is mentioned together with dialogue as criteria for renewing studies, it means that they are at the service of the path of a Church that increasingly puts evangelization at the center. Not apologetics, not manuals, as we heard, but evangelizing. At the center is evangelizing, which is not the same thing as proselytizing. In dialogue with cultures and religions, the Church announces the Good News of Jesus and the practice of evangelical love which He preached as a synthesis of the whole teaching of the Law, the message of the Prophets and the will of the Father. Dialogue is above all a method of discernment and proclamation of the Word of love which is addressed to each person and which wants to take up residence in the heart of each person. Only in listening to this Word and in the experience of love that it communicates can one discern the relevance of kerygma. Dialogue, understood in this way, is a form of welcoming.

Dialogue, he acknowledged, is no magic formula, but a methodology of respect for persons as well as ideas and the only path to peaceful and just social relations.

Francis also pointed to dialogue as a kind of academic self-corrective. "We need theologians ― men and women, priests, lay people and religious ― who, in a historical and ecclesial rootedness and, at the same time, open to the inexhaustible novelties of the Spirit, know how to escape the self-referential, competitive and, in fact, blinding logics that often exist even in our own academic institutions and concealed, many times, among our theological schools." That phrase "blinding logics" is certainly an incisive description of certain ideologically driven norms in the academy, and it can be found on both the left and the right.

The pope's sermon at the great feast day Mass was one of my favorites of his entire pontificate because of its bold anti-Pelagian challenge:

There is a great teaching here: the starting point of the Christian life is not our worthiness; in fact, the Lord was able to accomplish little with those who thought they were good and decent. Whenever we consider ourselves smarter or better than others, that is the beginning of the end. The Lord does not work miracles with those who consider themselves righteous, but with those who know themselves needy. He is not attracted by our goodness; that is not why he loves us. He loves us just as we are; he is looking for people who are not self-sufficient, but ready to open their hearts to him. People who, like Peter and Paul, are transparent before God.

The conflation of the moral with the holy is a great temptation for the Christian. In other religions, it may be different, but in ours, holiness consists in a reliance on the grace of God in all circumstances and in every decision.

There is an ecclesiological angle to this anti-Pelagianism as well. The other day, I came across an article at Patheos about Hans Urs von Balthasar and why he remained a Catholic. Speaking against the Puritans of his day, he wrote:

If they [the emotivist Puritans] refuse, I fail to understand how they can assert they are in the Church and not outside fighting against her. However, let us leave them to their fate or, better, to a gentle Providence who may open their eyes to this truth: a sinless, all-knowing Church that would sell off the old dusty one would be no Church at all but only a Montanist-Donatist-Pelagian sect not worth remaining in and having nothing in common with the Church of Jesus Christ. We leave them to draw that simple conclusion, and proceed to positive argumentation.

I remain in the Church because the old catholica still resembles the Church which leaps to the eyes from the pages of St. Paul's Epistles and the Acts. Indeed, the resemblance is so striking as to be offputting. The very Corinthians whom Paul lauds "for the grace of God which was given you in Christ Jesus, be-cause in everything you have been enriched in him" (I Cor.1 ff.), he proceeds to denounce in chapter after chapter for forming cliques, for their arrogance and their incontinence, for loveless behavior at the Eucharistic party (the expression comes from a Swiss parish bulletin), finally for their denial of the Resurrection by attempts to rationalize it. 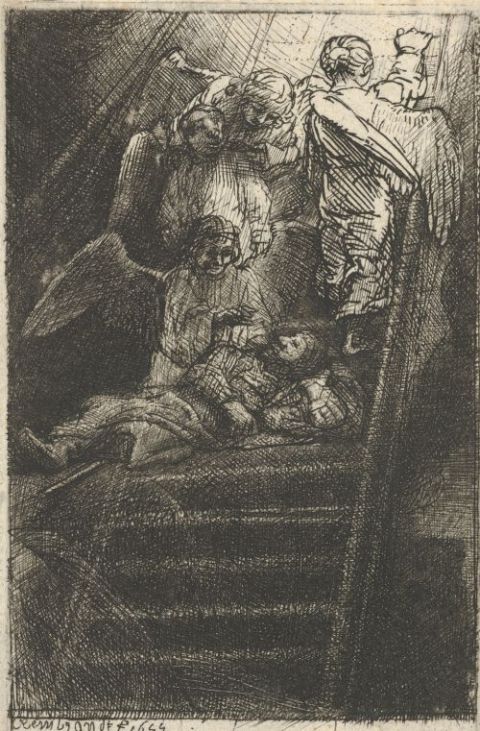 Finally, we come to the Mass for the migrants. There the pope preached on Jesus' preferential option for the outcast and his mission of liberation and salvation.

God alone opens up heaven for those who live on earth. Only God saves. This total and absolute trust is shared by the head of the synagogue and the sick woman in the Gospel (cf. Mt 9:18-26). These are scenes of liberation. Both draw close to Jesus in order to obtain from him what no one else can give them: liberation from sickness and from death. On the one hand, there is the daughter of one of the city authorities; on the other, a woman afflicted by a sickness that has made her an outcast, marginalized, someone impure. But Jesus makes no distinctions: liberation is generously given to each of them. Their longing places both the woman and the girl among the "least" who are to be loved and raised up.

Then, referring back to the reading from the Hebrew Scriptures, and Jacob's act of trust in God, the pope brought his theology into the realm of action, specifically a kind of action in contemplation, or contemplation in action, I am not sure which, but either way it is a mark of pastoral fervor:

We spontaneously return to the image of Jacob's ladder. In Christ Jesus, the connection between earth and heaven is guaranteed and is accessible to all. Yet climbing the steps of this ladder requires commitment, effort and grace. The weakest and most vulnerable must to be helped. I like to think that we could be those angels ascending and descending, taking under our wings the little ones, the lame, the sick, those excluded: the least ones, who would otherwise stay behind and would experience only grinding poverty on earth, without glimpsing in this life anything of heaven's brightness.

He finished by thanking those migrants who, having arrived only a few months prior, are already helping the more newly arrived. He thanked them for "this most beautiful example of humanity, gratitude and solidarity."

Humanity, gratitude and solidarity. These, along with dialogue, humility and mercy, are the touchstones of this pope's theological vision. It is profoundly pastoral, but that hardly suggests any kind of laxity. Quite the contrary. Francis' preaching, if received, is a spur to action, action that produces witnesses to the Gospel. That is how he understands evangelization, and it is more true to the Gospels and to the spirit of the times than any social media program.