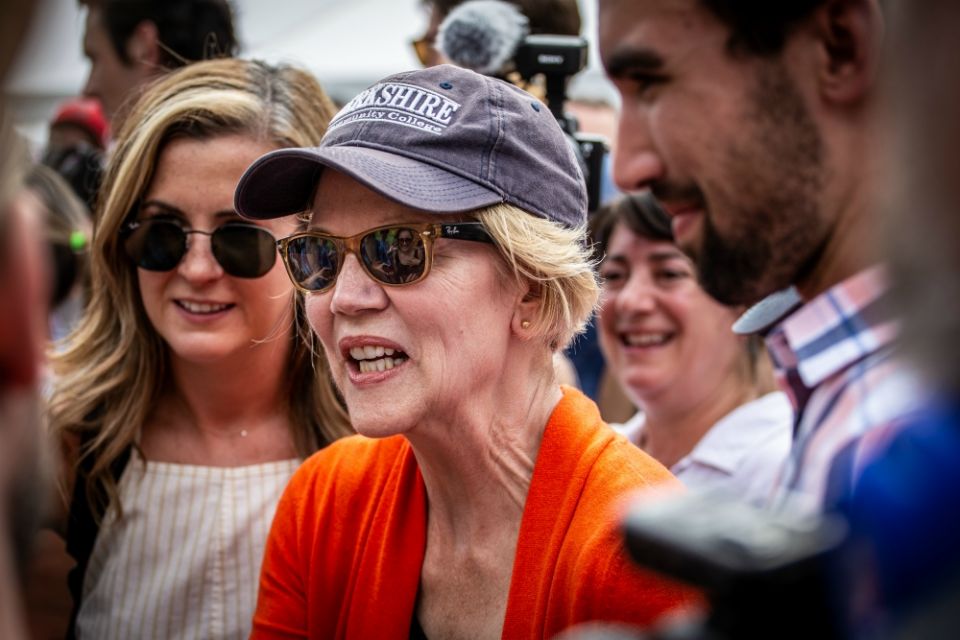 Yesterday, I linked to an article by Aaron Blake in The Washington Post that repeated a concern many have voiced about Sen. Elizabeth Warren's candidacy for the Democratic presidential nomination: Democrats like her, but can she win?

Blake cited a recent Quinnipiac poll in which Warren garnered 21% of the vote, her highest figure to date. But that same poll of Democratic voters indicated that only 9% thought Warren was the most electable Democrat. In poll after poll, voters view former Vice President Joe Biden as the candidate most likely to defeat Trump.

The concern about Warren seems to be that she is too liberal, that "she's also an older, white, intellectual woman running in the aftermath of the Hillary Clinton debacle," and that "it's entirely too easy to caricature her as a liberal-elite former Harvard professor whom President Trump could drub with those oh-so-important working-class white voters."

Blake also looked at a recent poll by Stanley Greenberg that showed Biden does better than Warren among independent voters and among Republican moderates, although Warren did a better job consolidating the Democratic base. The poll also showed Warren and Biden tied among white working-class voters: Both trailed Donald Trump by 19 points, but Trump walloped Hillary Clinton in this demographic by 27 points.

As Blake points out, especially in the early stages of the race, pegging electability can be a fool's errand. In 1980, GOP moderates' principal argument against the candidacy of Ronald Reagan was that he was not electable, and until his victory in the 2008 Iowa caucuses, many people doubted Barack Obama's electability. You can also reverse the equation: In 2004, John Kerry presented himself in the primaries as candidate best able to beat George W. Bush, and in 2012 Mitt Romney made a similar pitch in the Republican primaries, that he was the guy to beat Obama. Neither man made it to the White House.

Many more people will whisper in quiet their concerns about the Hillary factor, even if they do not want to admit it in public: Is it simply the case that the American people are not ready for a female president?

Apart from their gender, Warren does not have a whole lot in common with Clinton. For more than 20 years, Clinton had been one of the most polarizing figures in American politics, and long-held negative opinions about her hounded her presidential run. She was guarded, sometimes painfully insincere, and although people who knew her well had developed a deep and genuine affection for her, she never really connected with the hoi polloi. She also was perceived as overly cozy with Wall Street, which helped make Trump's populism persuasive to swing voters. Warren has not been on the national stage for a decade yet, and I do not know anyone who thinks she is insincere.

No one, but no one, could think Warren is beholden to Wall Street. Indeed, she is the best-positioned Democratic candidate to challenge Trump at his most vulnerable point: his betrayal of working-class Americans by promising them he would drain the swamp and fix the economic system that had forgotten them, only to people his administration with guys from Goldman Sachs and pass a tax cut for the rich.

Earlier this year, I called attention to some analysis by Nathaniel Rakich at FiveThirtyEight. He compared Warren's 2018 vote totals to those garnered by Clinton in 2016. With the enormous caveat that it is always tricky comparing a midterm to a presidential election, it was interesting what Rakich said about the 10 towns where Warren most outperformed Clinton: "They are all small towns in Western Massachusetts. With a few exceptions, they have incomes lower than the statewide average. Most of them have fewer college graduates than average as well. And Trump improved upon Romney's margin in all but one of them."

Conversely, the towns where Warren most underperformed Clinton were the wealthy suburbs around Boston, and suburban, moderate women Republicans and independents were the key to the Democrats' retaking the House last year. I wonder, though, how many such Republicans and moderates voted for Trump in 2016 because they told themselves he would mature into the job. Either way, it is not inconceivable that Warren could hold onto some of the Democratic gains from the midterms, while overperforming Clinton in rural areas of the country. And she could slip on a banana peel tomorrow.

Elections are not predictable events. Trump certainly looks vulnerable today and if the economy slows down, he could be subjected to a thumping by almost any Democrat. Bill Clinton look vulnerable in the summer of 1995 and Obama did in 2011. Democratic primary voters should select whom they want to carry their banner and not get into the business of electoral prognostication. If they want Warren, they should vote for Warren, and if they do, they may have selected the first nominee in this century who can actually beat an incumbent president.