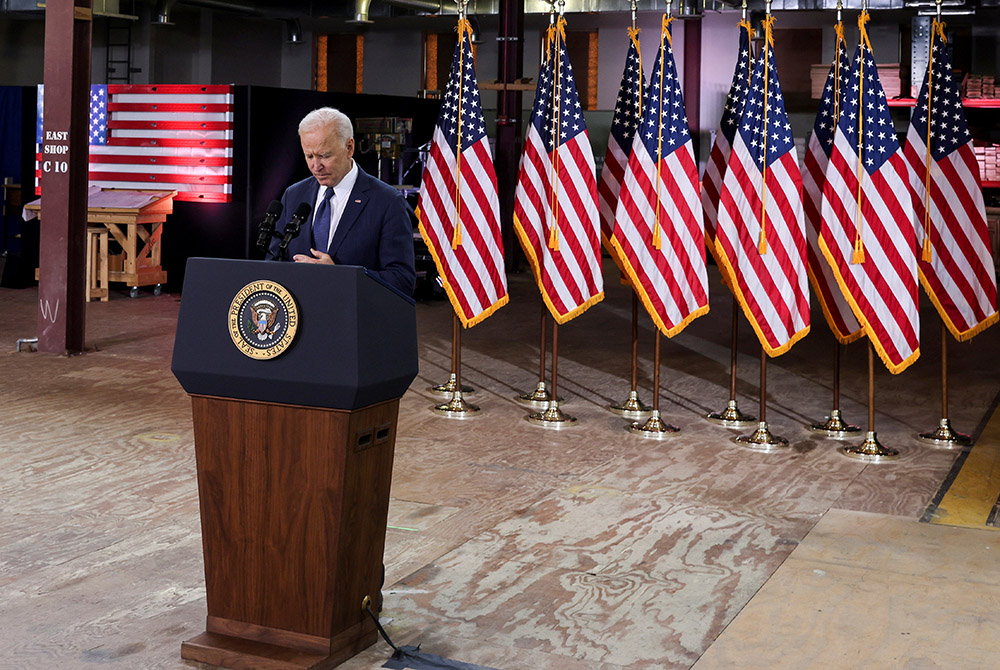 President Joe Biden speaks about his $2.2 trillion infrastructure plan at Carpenters Pittsburgh Training Center March 31 in Pittsburgh. The proposed package has funding for broadband, housing, the electric grid, roads and bridges, and other areas. It will raise taxes on corporations and wealthy Americans to pay for its spending priorities. (CNS/Jonathan Ernst, Reuters)

President Joe Biden's infrastructure bill follows in the footsteps of his American Rescue Plan. It is an example of Catholic social doctrine in action. Taken together, they represent not only a repudiation of Reaganomics, but the introduction of a new kind of social policy we could and should call Fratelli Tutti economics!

Infrastructure projects are, almost by definition, oriented towards the common good — a major theme in Fratelli Tutti. The $115 billion for roads, bridges and highways will not only put tens of thousands of people to work, but will result in a long overdue improvement in our crumbling transportation system, a system we all use. Even if you do not own a car, you need good roads and bridges for the trucks that bring the produce to your grocery store.

An estimated $85 billion is dedicated to public transport and another $80 billion to freight and passenger rail. Anyone who has traveled abroad knows that our mass transit systems are pathetic when compared to those found in other industrialized nations. As often as not, the situation we face is the result of decisions made in the 19th century. Consider the case of high-speed rail. Amtrak trains could run much faster than they do now. It is the tracks, not the trains, that need updating.

The tracks are owned by the rail companies, not by the state, because in the 19th century, before the advent of the federal income tax, the rail companies had the money. It is long past time to put high-speed rail tracks down the median of I-95 and have real high-speed rail along the entire Northeast Corridor — and beyond. Amtrak is envisioning high-speed connections between Nashville and Atlanta, Phoenix and Southern California, and Louisville and Nashville.

My mother once rode the train to high school each day. Trains are inherently communitarian and not only as a mode of transport. A train route has a terminus, around which all manner of shops and amenities can thrive. The ugly suburban strip mall, with lots of parking, was one of the nastier consequences of the societal commitment to cars as America's principal mode of transport. Cars fit the individualistic temper of the American psyche, and they will not soon be eclipsed by trains. But the more people who discover that living without a car can be liberating — and my car seems to always be in the shop draining my wallet — the better not just for the environment but for the maturation of America's cities.

The Biden plan calls for $100 billion for high-speed broadband. This will provide much needed help to rural America where it has not been cost-efficient for a company to do the work. As someone who lives in a small town, I can tell you that anytime there is a wind storm, I will lose my internet connection a few times per hour. You can imagine how that disrupts a Zoom call.

The commitment to high-speed broadband is politically illustrative. Donald Trump and the Republicans won by overwhelming margins in rural counties. Yet Trump never managed to get an infrastructure bill through Congress. They passed a tax cut for the rich, but couldn't find the time or the will for high-speed broadband. If Biden can get this done, and done quickly, Democrats will have not only materially helped many people who voted for Trump, they will have demonstrated that government can be a positive force for good in people's lives, a belief that is also the opposite of Reaganism.

Biden's proposal goes beyond usual infrastructure projects, which has provoked the ire of some Republicans but only confirms the plan's conformity with Fratelli Tutti economics. Many provisions are targeted at converting the country to sustainable forms of energy. The plan's $174 billion for electric vehicles is quite a down payment on one of the most critical changes in the way we Americans go about business. The $100 billion for electrical infrastructure is the 21st century equivalent of the Eisenhower interstate system: Without improvements to the grid, converting homes and business to electric power will come with crippling disruptions. Another $100 billion for workforce development will help prepare workers for the jobs of the future.

Fratelli Tutti built on "Laudato Si', on Care for Our Common Home," the encyclical Pope Francis delivered in 2015 on the need to care for creation. After four years of neglect and scorn, the federal government is finally getting serious about the need to overhaul our energy sector before the planet becomes unlivable.

The other aspect of the infrastructure plan that makes it conformable to Catholic social doctrine is that it specifically takes account of past racial inequities and seeks to address them. About $45 billion is dedicated to transportation inequities, an acknowledgement that urban planners often failed to bring bus and tram lines to minority neighborhoods that needed them the most. The Catholic Campaign for Human Development often worked on behalf of minority communities trying to get a bus line extended a few more miles, or kept running on the weekends.

Other funding will go to help neighborhoods that were destroyed by urban planners in previous decades, such as Claiborne Avenue in New Orleans, which had a major highway put through the center of it. About $20 billion will go to "reconnect" minority neighborhoods with economic opportunities that previous generations had obliterated.

About $400 billion is dedicated towards home- and community-based health care, especially eldercare, work that is underpaid and mostly undertaken by women. This money is the equivalent of the childcare tax credits in the COVID-19 relief bill that was signed into law last month. It does not speak well of our society that we have for so long failed to remunerate adequately those who care for the most vulnerable, the young and the old. It speaks very well of Biden's first 100 days that he is seeking to finally treat that important work as work, and find ways to compensate it fairly.

We all remember the drinking water crisis in Flint, Michigan, in which aging, lead pipes contaminated water for the city's mostly Black residents. It was shocking to discover a major American city afflicted by that kind of a problem, still more that the problem was ignored by public officials at first. $111 billion in the infrastructure bill is dedicated to clean water projects.

Restoring our common means of transportation and communication, taking big steps to covert the economy to sustainable energy, and helping to repair the economic harm caused by racist and sexist policies of that past: If that does not sound like Fratelli Tutti economics, what does?

Related: Environmental groups mobilize to make sure 'build back better' isn't just a slogan for Biden
A version of this story appeared in the April 30-May 13, 2021 print issue under the headline: Joe Biden teaches Fratelli Tutti Economics 101.