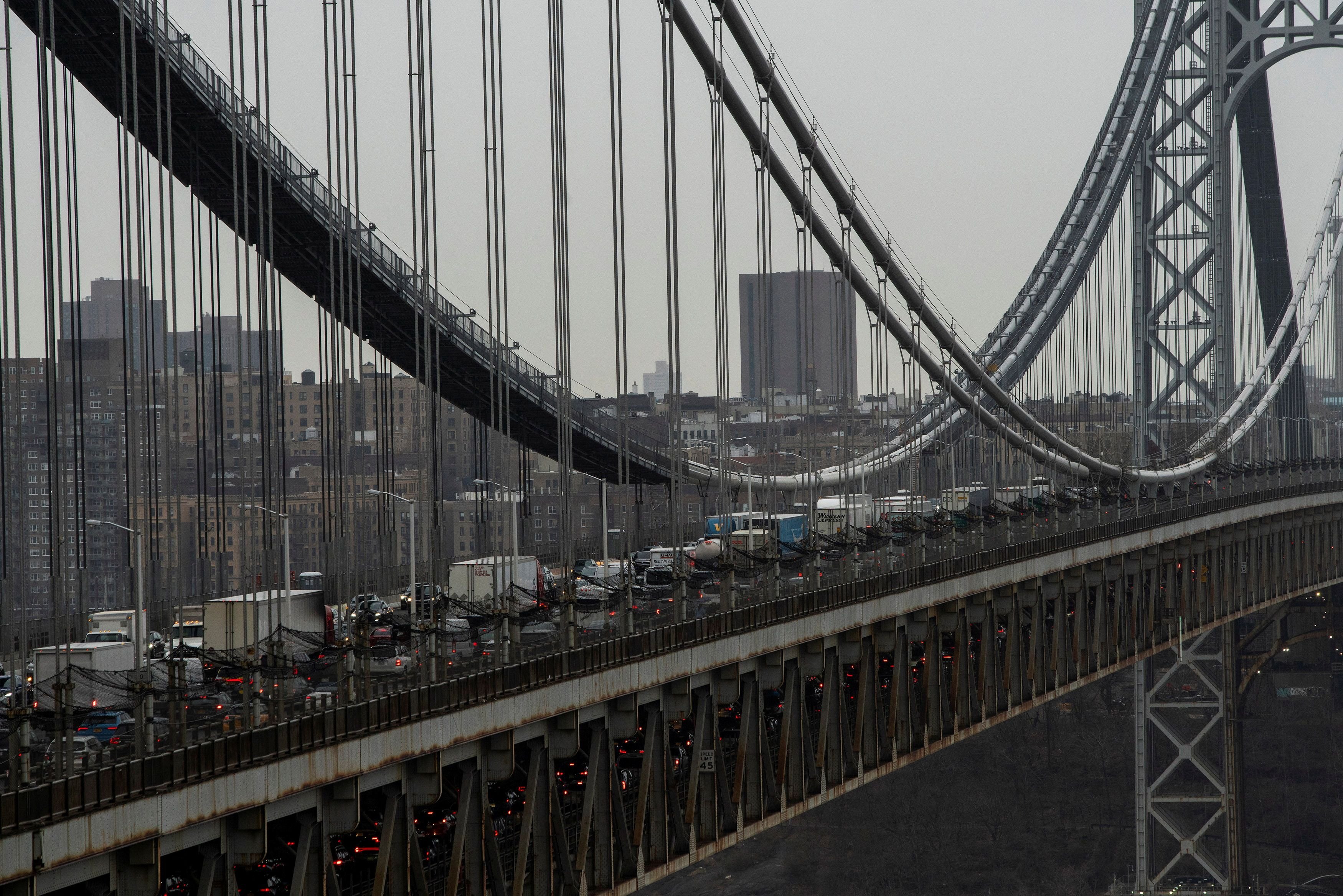 The George Washington Bridge is seen from Fort Lee Historic Park, New Jersey, March 31, 2021. In a speech in Pittsburgh that same day, President Joe Biden laid out his proposed $2.2 trillion infrastructure package, with funding for broadband, housing, the electric grid, roads and bridges, and other areas. It will raise taxes on corporations and wealthy Americans to pay for its spending priorities. (CNS/Reuters/Eduardo Munoz)

As the Biden administration begins selling the president's $2 trillion infrastructure plan, environmental groups are mounting campaigns to make sure his "build back better" pledge doesn't remain merely a slogan.

President Joe Biden unveiled his American Jobs Plan on March 31. It proposes spending $2 trillion over the next decade to upgrade the nation's roads, bridges and highways, transition the energy grid to 100% clean energy by 2035, retrofit millions of buildings and homes to be more energy efficient, and revitalize the economy through the creation of millions of new jobs.

A day after the ambitious plan was made public, environmental groups began mobilizing to support it, but also to hold the president to his campaign pledge to rebuild U.S. infrastructure post-COVID-19 in more just, equitable and sustainable ways. The effort, they say, must simultaneously address climate change and provide access to jobs and economic opportunities in all communities.

The #ACTNow coalition, made up of a dozen environmental organizations, has launched campaigns to reach out to legislators and coordinate grassroots efforts to educate their communities about the plan and what it means for climate change.

Interfaith Power & Light, one of the groups in the coalition, has signed up team captains around the country to set up meetings with elected officials and lead media campaigns.

"We think that it's important to talk to them from a values perspective and to make sure that they know that people of faith are prioritizing this issue," Executive Director Susan Stephenson told EarthBeat.

For faith communities, she said, it is a priority that any legislation to address climate change also accelerate the transition to clean energy, taking care of frontline communities and those long reliant on fossil fuels. The lobbying effort also includes support for the Reclaim Act, which is aimed at restoring abandoned coal mines and coal communities, primarily in Appalachia.

Stephenson called the American Jobs Plan "a huge opportunity to get meaningful action on climate," especially in light of recent events that have shown why infrastructure is a matter of concern for faith communities.

Examples include the winter storm power outages in Texas, which had a disproportionate impact on low-income communities, and the pandemic, which has underscored the crucial role of frontline workers, many of whom rely on public transit to commute to their jobs. Making transportation systems and energy grids run on clean energy means less pollution, which historically has most impacted communities of color.

"It's a really exciting moment to see this opportunity to invest, to create good jobs and to make our communities healthier for people all over the country. So I think it's clearly a moral issue that people of faith resonate with," Stephenson said. 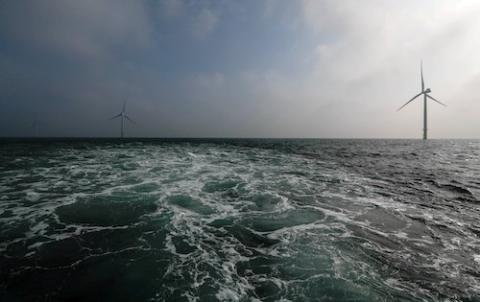 Windmill turbines are seen offshore near Amsterdam, Netherlands, in 2017. The Biden administration announced March 29, 2021, a plan to expand the use of offshore wind power in the Atlantic Ocean. (CNS/Reuters/Yves Herman)

Throughout his presidential campaign, Biden continuously repeated his pledge to build back better in a way that addresses climate change and also provides assistance for parts of the country left out of economic growth or hurt by its polluting byproducts. The American Jobs Plan includes his pledge to ensure that 40% of the benefits go toward historically disadvantaged communities.

Biden has proposed paying for the plan by raising the corporate tax rate, lowered to 21% by former President Donald Trump, to 28%, and levying other taxes on corporations to discourage the outsourcing of jobs and use of tax havens.

The plan also includes $174 billion to electrify the national transportation system, including installing 500,000 electric vehicle chargers by 2030; spending $50 billion for land and watershed restoration, with creation of a Civilian Climate Corps; and using $100 billion to expand broadband internet access across the country, especially in rural areas and on tribal lands.

The plan is seen as a cornerstone of the new U.S. climate pledge under the Paris Agreement that Biden is expected to announce ahead of a climate summit of world leaders on Earth Day, April 22. Interfaith Power & Light issued a letter April 6 with more than 1,000 signatures that called on Biden to set the a high bar with its next climate target that would encourage other countries to follow suit.

On April 5, a ruling by the Senate parliamentarian opened a path for Democrats to pass infrastructure bills by simple majority votes in the same way they passed the American Rescue Plan that provided a third round of COVID-19 relief. That route may prove necessary, as Republicans have signaled opposition to the plan, calling it a tax hike and a Green New Deal in disguise. Some Democrats, including Sen. Joe Manchin of West Virginia, have expressed concern about parts of the proposal.

Speaking at a carpenter training center in Pittsburgh March 31, Biden said his plan was meant to "rebuild the backbone of America" and "will lead to a transformational progress in our effort to tackle climate change with American jobs and American ingenuity."

"We all will do better when we all do well. It's time to build our economy from the bottom up and from the middle out, not the top down," the president said.

"We can't delay another minute," he added. "It's long past due."

The Sunrise Movement, the youth-led climate group that has championed the Green New Deal, has organized more than 60 rallies across the country on April 7 to pressure Biden to strengthen his infrastructure plan and urge politicians to support the group's Good Jobs for All campaign. 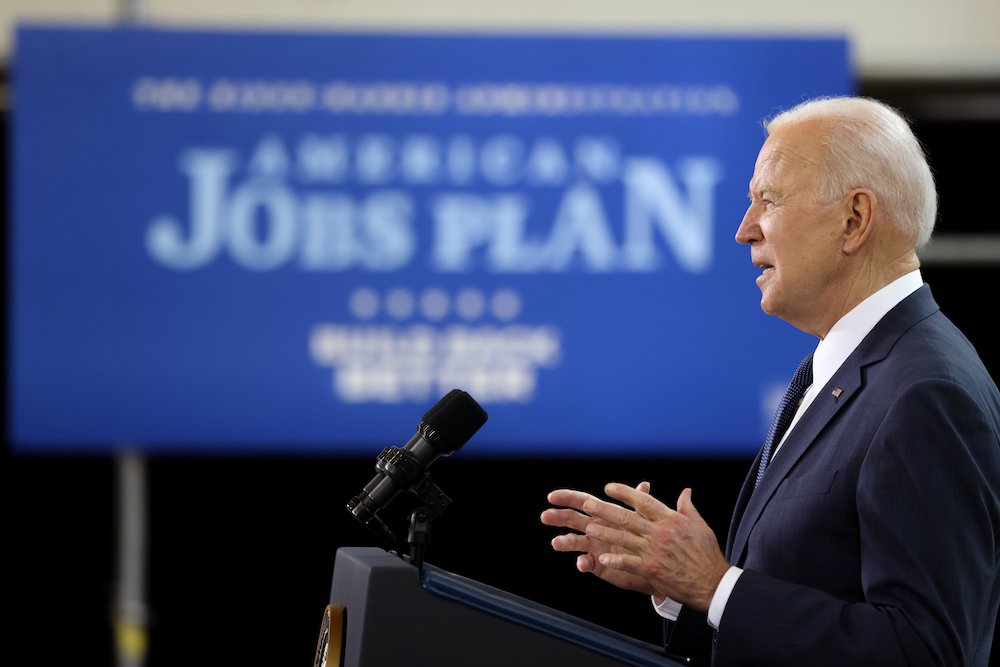 Varshini Prakash, Sunrise executive director, in a statement called the president's plan "a historic step" and one made possible by youth and others calling for a Green New Deal — a proposal from which Biden has distanced himself. But Prakash added that "so much more is needed to reach the scale of what is necessary to truly transform this country to stop the climate crisis."

An analysis from the World Resources Institute estimated that roughly half of the American Jobs Plan would be spent on climate change, clean energy and environmental justice, and said it would represent the largest COVID-19 recovery spending package on climate and environment in the world.

A separate study of the plan from Georgetown University's Center on Education and the Workforce, which the Biden administration has cited, projected it would create or save 15 million infrastructure jobs over the next decade and grow that sector from 11% to 14% of all U.S. jobs. It found that the bulk of the new jobs would be accessible to people with a high school diploma, with the largest share of jobs located in the Southeast.

While the infrastructure program would be a boost for Black and Latino workers, the Georgetown study reported it would primarily benefit men, who currently hold 90% of infrastructure jobs.

Richard Trumka, president of the AFL-CIO, lent his support to the plan in a statement, but added that "investments alone are far from sufficient." He called on the Senate to also pass the PRO Act, which would expand protection for workers seeking to unionize.

A central focus for "build back better" advocates is ending investment in fossil fuel infrastructure.

On April 1, Indigenous youth gathered in Washington, D.C., to urge Biden and the Army Corps of Engineers to halt construction of the Enbridge Line 3 pipeline in northern Minnesota and shut down the Dakota Access Pipeline (DAPL). Carrying a 300-foot black snake symbolizing oil pipelines, several hundred participants delivered a petition carrying 400,000 signatures to the Army Corps of Engineers to stop the pipelines and symbolically destroyed the snake outside the White House.

Ethan Black Fox, 18, was among the participants. A member of the Standing Rock Youth Council who helped organize the rally, he told EarthBeat that Biden's inaction on the Line 3 and Dakota Access pipelines threatens his credibility as a climate-focused president.

"We want him to fully live that out, because our future's really in jeopardy if we don't act on it now," Black Fox said. "And so we're just hoping that he'll act so we can build back toward a healthier climate."

The American Jobs Plan calls for ending subsidies for the fossil fuel industry. And days before its release, the White House announced an expansive plan to construct offshore wind farms along the East Coast capable of powering more than 10 million homes.

Asked what building back better means to him, Black Fox said it would be approaching development in a way that results in a healthier climate where not only people can thrive, but animals as well. As for specific actions to make that happen, the 18-year-old was succinct in his suggestions.

"Shut down DAPL, stop Line 3 and build back fossil-free," he said.

* Editor's note: The list of #ACTNow participants has been updated.