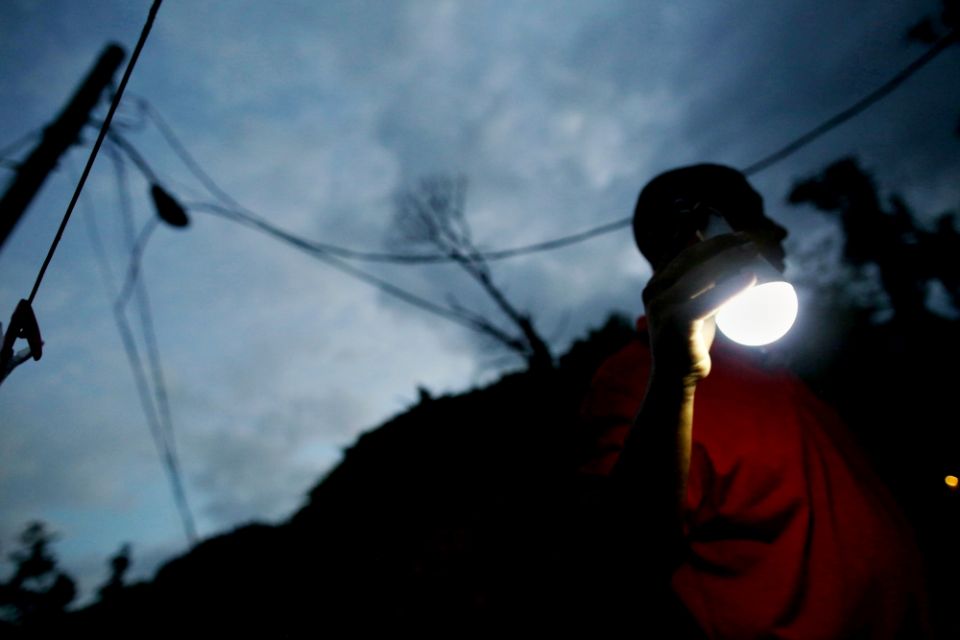 A man uses a solar lamp while walking in the dark May 11 in Jayuya, Puerto Rico, where the fragile power system was still reeling from the devastation caused by Hurricane Maria eight months before. (CNS/Reuters/Alvin Baez)

At Politico, a different take on the 2018 midterms and why they turned out the way they did: The Democrats fought to a tie among older voters, mostly by focusing on health care and maintaining coverage for pre-existing conditions. It is remarkable that 56 percent of the midterm electorate was over 50 years of age.

And, at Yahoo Finance, AFL-CIO President Richard Trumka explains how organized labor organized the elections. They, along with the court-ordered redistricting, helped flip several House seats in Pennsylvania and boot Wisconsin Gov. Scott Walker out of office. Organized labor turned Nevada from purplish to blue. I worry about Ohio and was underwhelmed by the results in Michigan. In the internal discussions about the direction of the Democratic Party, I worry that NARAL will trump the AFL-CIO, a strategy that only guarantees four more years of President Donald Trump.

At The New York Times, Michelle Cottle argues that now is the time for the Democrats to argue about their priorities, in the form of the shadowboxing about whether Rep. Nancy Pelosi should be the next speaker. I am firmly with the anti-Pelosi group, but agree with Cottle: Fight it out now because in January, the Democrats will have to be united to confront Trump.

At The Washington Post, Congresswoman Kathleen Rice, who represents New York's 4th Congressional District, argues both that Pelosi has served the party — and the country — well, but that it is still time for new leadership in the Democratic caucus. Pelosi's skills as a vote counter would matter more if the Democrats also controlled the Senate, but they don't. What matters most is someone who can articulate an alternate agenda from that put forward by the president, ideally one that makes GOP senators and congressmen really squirm.

From our friends at Jubilee USA, a statement from the religious leaders in Puerto Rico about how the proposals to cope with the island's debt have actually gotten worse when compared with the proposals being considered before Hurricanes Irma and Maria destroyed much of the island's infrastructure. First, the president threw paper towel at the poor people on that island. Now the hedge funds are picking the carcass. Isn't capitalism grand.

At Vatican Insider, Andrea Tornielli looks at the issue of synodality in the context of the Vatican's recent decision to squash a vote by the U.S. bishops on proposed remedies for the sex abuse crisis. The money quote: "The Church cannot self-redeem herself only through ever more detailed rules. She cannot risk being assimilated to a corporation by distorting herself." I shall have more on this topic tomorrow.

Relatedly, at Crux, Christopher White reports that Cardinal Blase Cupich is denying a report at the Catholic News Agency that he and Cardinal Donald Wuerl devised an alternate plan to the one put forward by the leadership of the U.S. Conference of Catholic Bishops. Again, more on this tomorrow.

At RNS, Mark Silk explains the kink in the exit poll data that originally indicated 26 percent of all voters were white evangelicals even though only 15.3 percent of the population is white evangelicals. Turns out, the cross-tabulation of different questions by pollsters creates this anomaly.