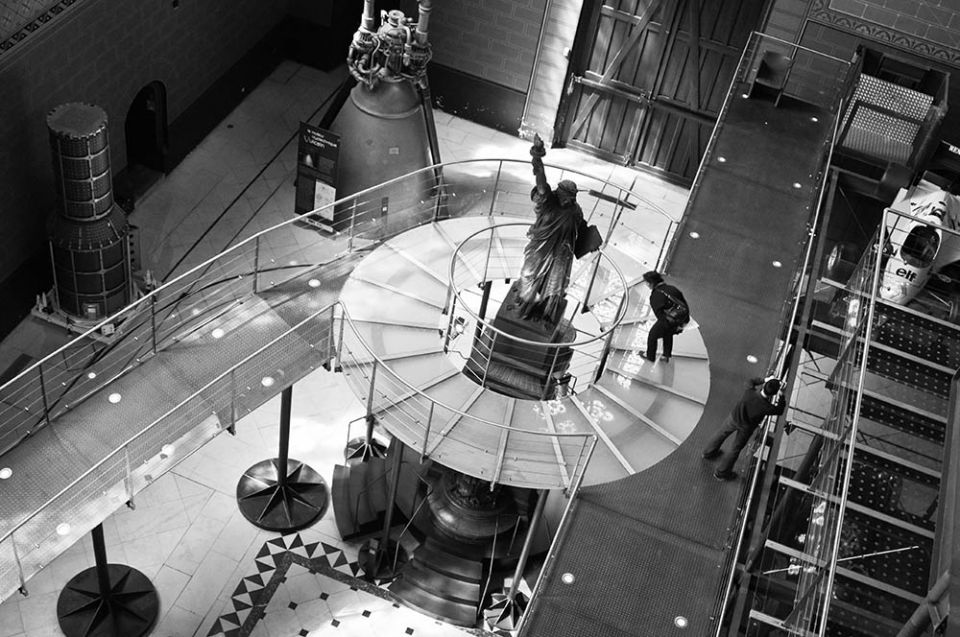 A bronze copy of sculptor Frederic-Auguste Bartholdi's model for the Statue of Liberty is seen in the Museum of Arts and Crafts in Paris. (Wikimedia Commons/Tieum512)

Last week, while the U.S. bishops were drinking Republican Party Kool-Aid, Pope Francis reaffirmed the church's clear teaching on the right of workers to organize. Speaking in a video message to a meeting of the International Labor Organization in Geneva, the Holy Father pointed out the ways the pandemic has highlighted the unfair and unsafe working conditions that many essential workers face, such as lacking access to health care.

From The Hill, Yi Zheng, a professor at Northeastern University, has invented a way of cooling buildings by using paper. That's right, paper, which reflects the sun's rays. Given the amount of carbon dioxide our air conditioning spills into the atmosphere, these kinds of inventions will be key if we are to save the planet.

In The New York Times, a bronze copy of sculptor Frederic-Auguste Bartholdi's model for the Statue of Liberty is being brought first to New York and then to Washington. Bartholdi, from Alsace, had seen his home overrun and annexed by Germany in 1870, but at this fraught time in the histories of both our nations, some ask whose liberty the statue represents. It is a fair question. I like the quote from Pap Ndiaye, the director of the museum of immigration in Paris: "The statue's inauguration, and later the mounting of Emma Lazarus's poem on the pedestal, corresponded with a great moment of European immigration and American welcome. There is something glorious in this."

At Politico, Zack Stanton looks at the changing political allegiance of Oakland County, Michigan, where Utah Sen. Mitt Romney grew up, as did his niece, Ronna McDaniel, who is now the Trumpian chair of the Republican National Committee. The suburban county now accounts for more Democratic votes statewide than nearby Detroit. Call me skeptical about the influence these upper-middle-class voters will have on the party. Still, until Trump is in jail or in a country with no extradition treaty, the Democrats need to have the biggest of big tents.

I am usually not a fan of petitions, especially the way they are used in the Catholic Church. But there is one petition drive I support: From NPR, a report on the tens of thousands of people who have signed a petition to stop Amazon founder and billionaire Jeff Bezos from being allowed to return to Earth after he takes his jaunt into space.

At the "Go, Rebuild my House" blog sponsored by Sacred Heart University, Colleen Dulle of America magazine examines the need to de-clericalize seminary formation and what Francis has said — and done! — recently on that very topic. This may be one of the most essential tasks facing the church and one of the most difficult.

Here is a simple story to put a smile on your face. From the New York Post, a look at the quadruplets who all just graduated — from Yale! The Wade brothers said they did not even run into each other that much on campus, because they all studied different things, but their futures look promising. Someone give some champagne to those parents!

Speaking of Yale, The New Yorker has a good rundown of "Dinner Party-gate," which is causing such a stir at Yale Law School. At the center of the controversy is professor Amy Chua, always something of a provocateur — her book about parenting, Battle Hymn of the Tiger Mother, caused enormous controversy when it was published in 2011 — but apparently someone who takes the time to mentor students, especially those from disadvantaged backgrounds. In short, she is complicated. She should not have been having dinner parties during the pandemic, but it is hard not to perceive some score-settling going on here as well.

Everyone now knows about Cristiano Ronaldo pushing aside two bottles of Coca-Cola at a press conference, and telling viewers they should drink water instead. The stock price of the corporate sponsor tumbled and the company's market value lost $5.2 billion in a day. Now, Ukraine soccer player Andriy Yarlomenko has taken a different approach. At the start of his press conference, he put two bottles of Coke front and center, and a bottle of Heineken, and said, "Contact me!" Too funny.