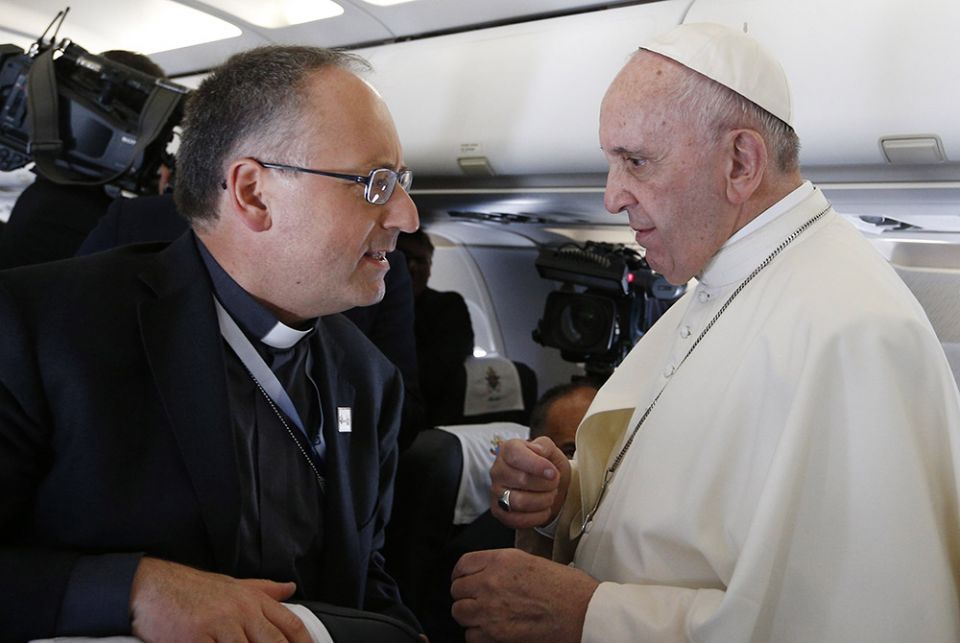 Pope Francis is pictured in a file photo talking with Fr. Antonio Spadaro, editor of La Civiltà Cattolica, aboard his flight from Rome to Krakow, Poland. (CNS/Paul Haring)

Jesuit Fr. Antonio Spadaro published an essay at La Civiltà Cattolica on Sept. 5 examining the question "What kind of government does Francis exercise, and how do we interpret it in the light of these seven years?" As we await what will be the Holy Father's second encyclical (not counting Lumen Fidei, which was largely written by Francis' predecessor Pope Benedict XVI), and the promulgation of the long-awaited apostolic constitution reforming the Vatican curia, the question could scarcely be more important.

For Spadaro, and I think there is no reason to dispute this, he views Francis' efforts at reforming the church through the lens of the pope's Jesuit formation. Spadaro looks back to the Council of Trent and the instructions Ignatius of Loyola gave to the Jesuit attendees at the council. "The interesting thing is that [Ignatius] did not go into doctrinal and theological questions at all," Spadaro writes. "He was more concerned with the testimony of life that the Jesuits were to give. This already gives an initial indication of how Ignatius understood the reform of the Church, and in a context as singular and important as that of a General Council. For him it was primarily a matter of reforming people from within."

Francis resists any effort to alienate spiritual reform from pastoral or structural reforms; the conversion of all three must go hand-in-hand. This necessitates a further consideration from Spadaro: "So aiming at conversion is not an ineffective spiritually pious project, but an act of radical government."

I wonder how much of the criticism of Francis comes down to resistance to this radical quality. Advocates on both the left and the right know what they want and have convinced themselves that they know what is best for the church. The only thing lacking in the achievement of their vision is the power to effect it. But Pope Francis does not want to replace conservative rules and ideas with liberal ones. He wants to convert the whole church away from such ideological binaries.

You see this, according to Spadaro, in the emphasis Pope Francis puts on emptying of self as a prerequisite to authentic conversion:

For Francis the reform is rooted in this emptiness of self, which he recognizes in one of the New Testament passages he loves most and quotes often: Philippians 2:6-11. There is the true reform. If it were not so, if it were only an idea, an ideal project, the fruit of one's own desires, even good ones, it would become yet another ideology of change.

The phrase has all the poignancy that accuracy alone confers: "yet another ideology of change."

Pope Francis, then, as Spadaro writes, sees "discernment itself that is the systematic structure of reform" and from which alteration in the institution takes place. While it is true, as Francis wrote in Evangelii Gaudium, No. 111, that the church is "a pilgrim and evangelizing people, always transcending every institutional expression, however necessary," that it is the Holy Spirit who creates the institution, it is also true, as Spadaro writes, that "Spirit and institution for Francis never deny each other."

We all make references to "the institutional church." We should stop doing so. It is the beginning of Gnosticism.

Spadaro states that Pope Francis has no "agenda" in the usual sense of the word. Instead, he wants to discern those moments when an authentic self-emptying permits a genuine encounter. Pointing to the Holy Father's 2018 letter to the bishops of Chile, in which the pope admitted he had erred gravely in assessing the situation, Spadaro writes: "Pre-packaged ideas are of no use and information may not be balanced and truthful: only encounter and immersion allow wise government." And, he adds, "And above all, there is no discernment regarding ideas, even ideas of reform, but on the real, on stories, on the concrete history of the Church, because reality is always superior to the idea."

In a note sent to Civiltà to clarify how all this applies to the pope's commitment to synodality, Pope Francis writes that when discernment is not properly engaged, the result is:

an atmosphere that ends up distorting, reducing and dividing the synod hall into dialectical and antagonistic positions that in no way help the mission of the Church. Because everyone entrenched in 'his truth' ends up becoming a prisoner of himself and his positions, projecting his own confusions and dissatisfactions onto many situations. Thus, walking together becomes impossible.

In this same clarifying note to Civiltà, Francis explains precisely how this dynamic manifested itself at the synod on the Amazon:

There was a discussion … a rich discussion … a well-founded discussion, but no discernment, which is something different from arriving at a good and justified consensus or relative majority. We must understand that the Synod is more than a parliament; and in this specific case it could not escape this dynamic. On this subject it has been a rich, productive and even necessary parliament; but no more than that. For me this was decisive in the final discernment, when I thought about how to shape the exhortation.

I have no reason to doubt this, and I am sure it was true of the twin synods on the family in 2014 and 2015, as well as the synod on the Amazon. But that raises a question: The pope agreed to the recommendations of the synods on the family on the highly contested issue of access to the sacraments for those who are divorced and remarried, but he balked at the Amazon synod's proposal for ordaining married men. I wonder if the ongoing hostility to the pope's decisions in Amoris Laetitia, the post-synodal exhortation that followed the first two synods, altered the pope's perception of how to proceed? Put differently, did the hostility from the pope's opponents — the refusal to embrace what the synods approved and he ratified — work?

The decision not to approve the Amazon synod's call for ordaining viri probati surely also involved considerations beyond those of discernment. The one that seems most obvious, but not mentioned here, is that a local synod should not make a decision that could affect the universal church.

One issue that Spadaro does not even mention is the role of women. The Amazon synod called specifically for a recognized ministry for women leading their communities. What is more, the pope had to look out at the assembled members of the synod and wonder why there were so few women and why the few women who were there did not even have a vote. I recognize that for a large section of the church, the issue of women in ministry is even more neuralgic than Communion for the divorced and remarried, but the current state of affairs is inexplicable and inexcusable and there are concrete steps Pope Francis could take to ameliorate it.

An additional concern that the article does not address is that the pope's description of discernment sounds profound and poetic but lacking in concreteness. The late New York Gov. Mario Cuomo famously observed, "You campaign in poetry; you govern in prose." There are enormous differences, of course, between governing in the Empire State and governing the Curia Romana, but I am willing to bet the similarities are somewhat frightening as well. It is not that I imagine the pope is naive. In years of talking to those who collaborate with him closely, naivete is a word I have never heard. At age 83, however, you have to ask if the kind of conversion(s) he is seeking is (are) possible?

It is wrong to fault Spadaro for not writing the article some of us wanted to read. His insights into the specifically Jesuit influences guide the pope are fascinating. But Francis, and his commitment to synodality, was also shaped by his tenure as Archbishop of Buenos Aires and, specifically, with CELAM, the Latin American bishops' conference, which has been the locus and the focus of the most fecund post-conciliar developments in theology. CELAM is the prototype of synodality for the universal church, so its influence on Francis' thoughts in this area are worthy of sustained analysis as well as this look at the Jesuit influences.

Critics will be found on all sides. One friend wrote to say he thought the article achieved the opposite of its intended effect, that it painted a papacy "stuck in neutral." Another worried that the pope was substituting a shamanistic spirituality for a sound theology of synodality. Edward Pentin, at the National Catholic Register, unsurprisingly accused Spadaro of misrepresenting the facts of this pontificate because "Francis has closed down dialogue and largely refuses to meet with those whom he views as being 'ideological' or 'rigid' or simply holding another vision for the Church more faithful to Tradition and orthodoxy." More faithful?

It is easy to ignore Pentin and those who oppose the pope no matter what. And you do not need to agree with the critics who support the pope but are worried that the papacy has lost its sense of mission. Yet, the Holy Father and those who counsel him need to hear these latter concerns. At its core, the Spadaro article shows a pope who understands the Petrine ministry is fundamentally about unity, that the only unity available to the church is one created by the gift of the Holy Spirit, and that all the plans in the world are no substitute for discerning the Spirit's will for the church.

What is less clear is if it is possible to govern the church without some kind of program. And, perhaps more difficult to answer is the question of how to overcome the current sectarianism within the church. These are all related to the discernment Pope Francis desires, but they are distinct and they need attention also. We are broken vessels trying our best to carry the precious gift of faith that has been given us. This pope of surprises may yet prove himself capable of leading the church into the bold reforms the Second Vatican Council envisaged and that have only been partially achieved.