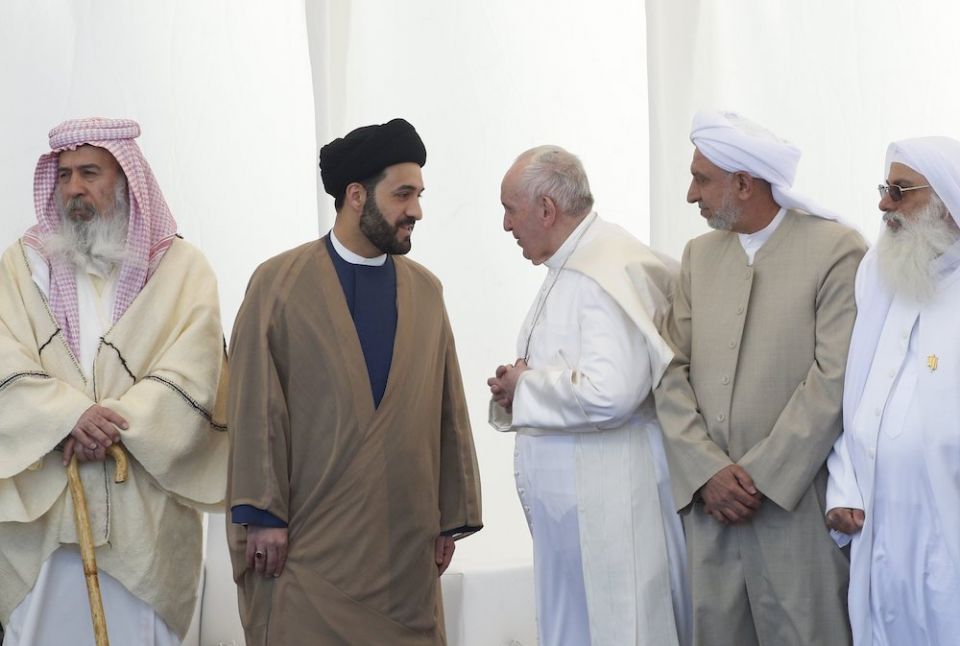 Pope Francis talks with a religious leader during an interreligious meeting on the plain of Ur near Nasiriyah, Iraq, March 6, 2021. (CNS/Paul Haring)

The Holy Father's trip to Iraq occasioned some of the most compelling images and phrases of this already compelling pontificate. I was most slayed by the photos of Pope Francis with Ayatollah Ali Al-Sistani, two old men, the one dressed simply in white and the other simply in black, in a spartan room, holding each other's hands as they exchanged greetings and then sitting down to chat like two long lost uncles.

Today I would like to call attention to a few things the pope said that did not garner the headlines but that invite reflection.

On his first day in Iraq, Francis spoke at the Cathedral of Our Lady of Salvation (Deliverance) to the country's bishops, clergy, religious and catechists. It is difficult to imagine a country whose religious leaders have endured greater suffering and persecution, first as a result of the U.S.-led invasion of the country and later due to the hegemony of ISIS terrorists over much of the northern part of Iraq. Francis acknowledged that suffering, and he found words of encouragement for them that seem to me to have come from deep within his heart and could have been addressed to Catholics throughout the world:

Pastors and faithful, priests, religious and catechists share, albeit in distinct ways, in responsibility for advancing the Church's mission. At times, misunderstandings can arise and we can experience certain tensions; these are the knots that hinder the weaving of fraternity. They are knots we carry within ourselves; after all, we are all sinners. Yet these knots can be untied by grace, by a greater love; they can be loosened by the medicine of forgiveness and by fraternal dialogue, by patiently bearing one another's burdens (cf. Gal 6:2) and strengthening each other in moments of trial and difficulty.

This spiritual recipe for ecclesial unity seemed, like so much of what the pope said on the trip, to have been welling up in his soul throughout the enforced isolation due to COVID-19. If the world economy is expected to unleash pent-up demand once most people are vaccinated, the Holy Father has accumulated pent-up supply of spiritual and religious insights. Unlike so much spiritual language, Francis' advice is never treacly, never naïve. His words are always accessible and bracing.

The next day, at the interreligious meeting in Ur, home of our father Abraham, Francis repudiated violence committed in the name of religion: "From this place, where faith was born, from the land of our father Abraham, let us affirm that God is merciful and that the greatest blasphemy is to profane his name by hating our brothers and sisters. Hostility, extremism and violence are not born of a religious heart: they are betrayals of religion." It needed to be said, but let's focus on a different part of that speech.

Francis reflected on the biblical account in which God invites Abraham to look upon the stars, and places ourselves in that account: "God asked Abraham to raise his eyes to heaven and to count its stars (cf. Gen 15:5). In those stars, he saw the promise of his descendants; he saw us." Then he used the image to challenge the idea, so commonly asserted, that religion is a source of war and conflict:

Thousands of years later, as we look up to the same sky, those same stars appear. They illumine the darkest nights because they shine together.  Heaven thus imparts a message of unity: the Almighty above invites us never to separate ourselves from our neighbours. The otherness of God points us towards others, towards our brothers and sisters. Yet if we want to preserve fraternity, we must not lose sight of heaven. May we — the descendants of Abraham and the representatives of different religions — sense that, above all, we have this role: to help our brothers and sisters to raise their eyes and prayers to heaven. We all need this because we are not self-sufficient. Man is not omnipotent; we cannot make it on our own. If we exclude God, we end up worshiping the things of this earth. Worldly goods, which lead so many people to be unconcerned with God and others, are not the reason why we journey on earth. We raise our eyes to heaven in order to raise ourselves from the depths of our vanity; we serve God in order to be set free from enslavement to our egos, because God urges us to love. This is true religiosity: to worship God and to love our neighbour. In today's world, which often forgets or presents distorted images of the Most High, believers are called to bear witness to his goodness, to show his paternity through our fraternity.

Think of the times someone casually says "keep religion out of politics … that's how wars start." Images of the Thirty Years' War are called to mind, although our historiography of that war has developed and we now know the causes were many and varied and not all religious.

To be sure, there is something to be said for understanding the differences between politics and religion. Certainly we should avoid conflating the two. But Francis flips the modern anti-religious prejudice on its head. It is materialism that begets civil strife. Religion, true religion, should invite humility and solidarity; indeed our capacity for true worship of God is linked by Pope Francis concretely with our commitment to our neighbor. The phrase "to show his paternity through our fraternity" is exquisite.

The last item is easy to miss and it comes from this same speech at the interreligious gathering at Ur. The pope said:

When terrorism invaded the north of this beloved country, it wantonly destroyed part of its magnificent religious heritage, including the churches, monasteries and places of worship of various communities. Yet, even at that dark time, some stars kept shining. I think of the young Muslim volunteers of Mosul, who helped to repair churches and monasteries, building fraternal friendships on the rubble of hatred, and those Christians and Muslims who today are restoring mosques and churches together. Professor Ali Thajeel spoke too of the return of pilgrims to this city. It is important to make pilgrimages to holy places, for it is the most beautiful sign on earth of our yearning for heaven. To love and protect holy places, therefore, is an existential necessity, in memory of our father Abraham, who in various places raised to heaven altars of the Lord (cf. Gen 12:7.8; 13:18; 22:9).

One of the things I like best about this pope is that he remembers the tactile nature of our Christian faith, the fact that most of us common people want to touch the holy or, in this case, make a pilgrimage to a holy place. Those who are worldly wise mock these instincts as superstition. Some who are theologically sophisticated disparage such acts of devotion. I am the least spiritual of men, but I have come to learn that a religion that does not embrace popular expressions of the faith is a dead religion. Give me religious kitsch over ecclesial good taste and fine theology any day and twice on Sunday. Fortunately, we do not have to choose!

When he was elected, Francis chose not to live in the apostolic palace but, instead, in the Domus Sanctae Marthae, a Vatican guesthouse where visitors stay and some other staff members live. It has all the charm of a clean Holiday Inn. We were all drawn to the simplicity of lifestyle his choice reflected, but he himself cited a different reason: He did not want to be isolated in the apostolic palace. The pandemic forced us all into isolation this past year, and we have all wrestled with it in different ways. We now know that the pope spent the past year storing up treasures, and in Iraq he began sharing them with us. It was a stunning trip. 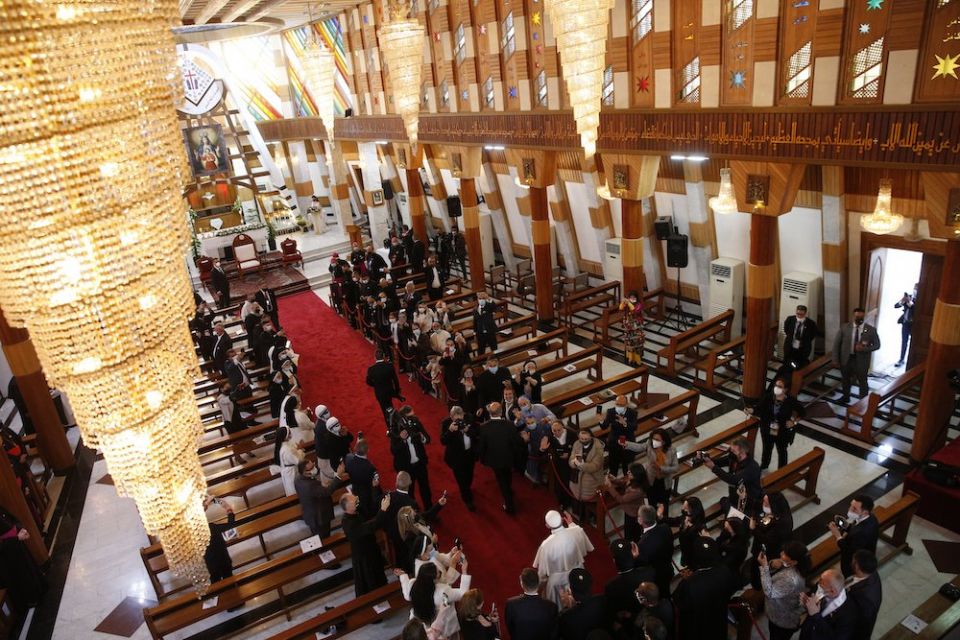 Pope Francis arrives for a meeting with bishops, priests, religious men and women, seminarians and catechists in the Syriac Catholic Cathedral of Our Lady of Deliverance in Baghdad March 5, 2021. (CNS/Paul Haring)

First Sunday of Advent: Do you have real hope?