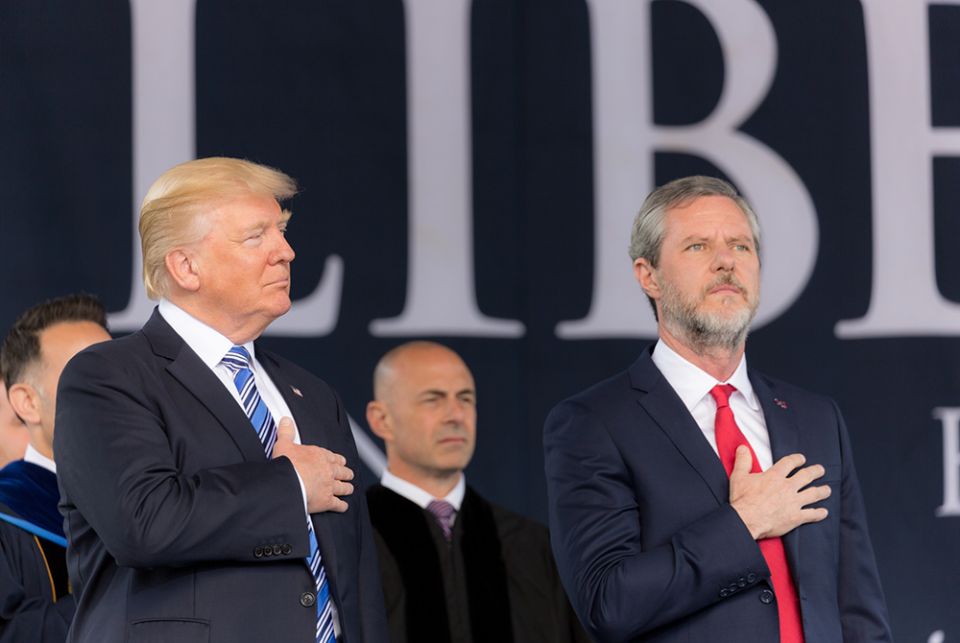 Maggie Severns, at Politico, penned an excellent essay looking at the struggle going on at Liberty University, the evangelical school founded by the late Rev. Jerry Falwell. At issue is whether the school will continue along the hyper-politicized iteration of evangelical higher education, associated closely with Donald Trump and pursued by its now disgraced former chancellor, Jerry Falwell Jr., or aim for an educational culture focused more on the evangelical faith that inspired its founding. The personification of the more strictly religious, less political route is Jonathan Falwell, who has served as pastor of Thomas Road Baptist Church since his father's death.

The human drama at work in the tale — Jerry Jr.'s sordid sex drive leading to blackmail allegations involving a pool boy having sex with Jerry's wife — is almost Shakespearean, but in a vulgar sort of way, combining pathos and bathos in equal parts. We now know why Jerry Jr. was not offended by Trump's obscene remarks about women in the "Access Hollywood" tapes! But the difference in style between the two brothers reflects a tension present in their father's decision to begin a Christian college all the way back in 1971.

Evangelical Christianity had long kept the world at arm's length. In the 20th century, this was long associated with the humiliation fundamentalists experienced at the Scopes trial, but it was always deeper than that. Unlike Catholicism with its "here comes everybody" vibe and its long tradition of civic engagement, not least via its impressive history of intellectual application, Protestantism's founders had more ambivalent attitudes towards human reason. Martin Luther called reason "Frau Jezebel" and repeatedly called reason "a whore." Calvin was less hostile to reason, and certainly exercised it to an extraordinary degree, but he, too, saw it as hopelessly compromised by human depravity.

For Jerry Falwell Sr., the first purpose of an evangelical education was to teach students the Bible and, in some ways, Liberty University (originally known as Lynchburg Baptist College, and later Liberty Baptist College) was always intended to be the kind of Bible college Falwell had attended, albeit on a large scale. Building a student's Christian character was the second objective he articulated in the school's early promotional literature. Finally, he promised vocational education. The three purposes combined so that the students would go out as heralds of the Gospel into their chosen professions. Indeed, he promised his school would become for evangelicals what Notre Dame was for Catholics, the place every student wanted to go.

The comparison with Notre Dame, one that Falwell made frequently, displayed both the strength and the limit of Falwell's character. He was not afraid to dream big and wished to rescue the evangelical community from the second-class citizenship they had brought on themselves with their self-imposed exile from mainstream culture. But, to him, Notre Dame was merely a big place with a great reputation. Falwell was brilliant but never profound. He could not grasp that the Catholic faith, and specifically its relation to human reason, made a university possible in a way that was more complicated for a fundamentalist Christian.

Those who remember the struggles over the reception of St. Pope John Paul II's apostolic constitution about Catholic higher education, Ex Corde Ecclesiae, know that the tension between human reason and faith, as well as that between a university community and its sponsoring ecclesial organization, poses many and varied interesting and complicated questions. I remember raising some readers' eyebrows when this blog published a commentary on the 20th anniversary of Ex Corde by the then-Coadjutor Bishop of Trenton, David O'Connell, but I still agree with most of what O'Connell had to say. In any event, that debate dealt with weighty issues, and important, often conflicting values. It was conducted mostly in high intellectual currency.

Falwell, on the other hand, once commented that "Anytime [the teachers at Liberty Baptist] start teaching something we don't like, we cut the money off. It's amazing how that changes philosophy." Any books in the Liberty library that were not sufficiently orthodox would contain a warning label that read:

If the goal of life is Gospel purity, it is much easier to withdraw from the world, and apparently some of the students at Liberty University today want an education that allows them to abstain more from politics so that they can better care for their souls and their Christian vocation. This has never been the Catholic option, except of course for certain religious orders, hermits and Stylites.

For fundamentalist Christians, however, this tension was there from the beginning. Jerry Falwell Sr. obscured it, in part, because of the novelty of his engagement with the world and because he was one of those people who attracts many followers prepared to accept his every desire without question, and certainly without questioning how disparate values can be made to cohere. Maintaining a fruitful tension was not something on Falwell's agenda and the fundamentalist faith does not equip its followers to embrace that kind of tension. What is different now is that the sordidness of Jerry Jr., and that of Donald Trump, have led some young evangelicals to question their school's adherence to a worldly, political agenda. It is the least surprising thing in the world.