The Supreme Court is right. That's no excuse for the church to be wrong. 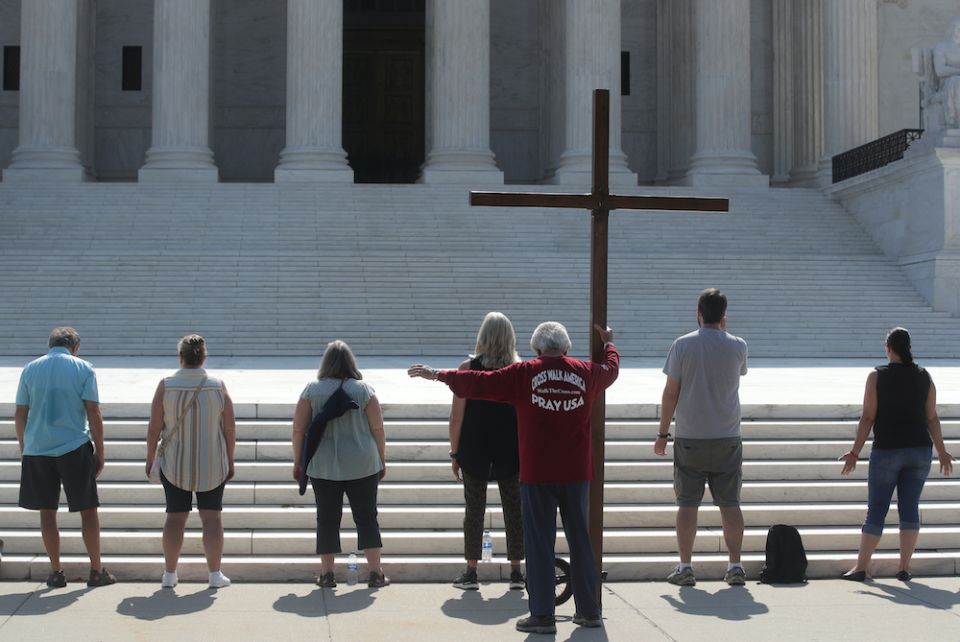 Demonstrators in Washington hold a large cross outside the U.S. Supreme Court July 8, 2020. In a 7-2 ruling that day, the Supreme Court said the California Catholic schools sued for job discrimination for firing teachers had acted within their rights in the recent firings. (CNS/Reuters/Jonathan Ernst)

The U.S. Supreme Court issued two decisions of significance to Catholics especially this week. In Little Sisters of the Poor v. Pennsylvania, the court ruled 7-2 that the Trump administration had the right to expand the religious exemptions to the contraception mandate enacted under the previous administration.

And, in Our Lady of Guadalupe School v. Morrisey-Berru, the court, again by a 7-2 majority, ruled that the "ministerial exception" applied to teachers who taught religious education even if they were not ordained ministers.

Both cases were correctly decided, but that is not the end of the story.

The contraception case is the easiest to examine. Ever since the court's 2014 ruling in Burwell v. Hobby Lobby, and in their 2016 non-ruling on the specific issue of religious non-profits, in which the court essentially said, "work it out," the court has pointed to the Religious Freedom Restoration Act, and they meant it.

I have no problem with the exemption process the Obama administration established, and think the Little Sisters must have received some lousy moral theology training to perceive any illicit material cooperation with evil in that process. But I will also sleep more easily knowing there is a super-majority on the court for religious liberty at this moment in our nation's history.

As much as I want to see Donald Trump voted out in November, I do fear that an incoming Democratic administration will be under tremendous pressure from anti-religious groups that would just as soon see religious liberty removed from the Constitution if it gets in the way of their policy priorities. The statement by Vanita Gupta, the president and CEO of the Leadership Conference on Civil and Human Rights, proves that my fear is not fantasy.

Catholic leaders should also ponder the dissent in this case, written by Justice Ruth Bader Ginsberg. "Today, for the first time, the Court casts totally aside countervailing rights and interests in its zeal to secure religious rights to the nth degree," she wrote.

That phrase, "to the nth degree" is spot-on. This whole fight against the contraception mandate was ginned up by conservative legal advocates and Catholic leaders, both bishops and laity, who simply hated Barack Obama.

They imperil religious liberty in the long run if they continually fail to see the legitimacy of other points of view, especially those of women whose rights and interests differ from their own. Unless we seek a perpetuation of the culture wars forever, we need to be less arch in our concern for religious liberty. With a 7-vote majority, a little relaxation is warranted.

The second case involving the ministerial exception is no more complicated as a legal matter, but here I discern social and theological issues that transcend the legal issues the court resolved.

As I wrote in May when the court addressed the issue, the ministerial exception is good civil law, but it does not absolve the church from the need, in justice, to provide recourse to employees who believe they have been unjustly treated. And for Pete's sake, we are Catholics, so we are not afraid of bringing law into the equation. In the case of those who work for the church, there needs to be a form of canonical recourse to employment decisions.

There almost was, it turns out. After writing about the need for some form of canonical administrative law, I was contacted by a reader who told me that when the current Code of Canon Law was being revised after the Second Vatican Council, a section on administrative law was included but was dropped from the final product in 1983.

A colleague then called my attention to a December, 1979 article "The Revision of Canon Law: Theological Implications," published in the journal Theological Studies by Catholic University of America professor Thomas Green.

It is the only extant article I found examining what Pope Paul VI and the commission revising the code had been working on regarding these administrative law canons. Green sets up the reasons for the inclusion of a new administrative law section:

A major concern of the 1967 Synod was the protection of the human and ecclesial rights of believers against arbitrary administrative discretion. This reflected a strong emphasis on the fundamental dignity of the human person both in Pacem in terris and in several conciliar documents, especially Dignitatis humanae.

The principles for the revision of the Code embodied a consciousness that Church law did not adequately protect the rights of persons affected by administrative action.

Accordingly, in October 1969, a special subcommittee of the study group on procedural law undertook the preparation of a schema on administrative procedure. This was forwarded to the bishops for evaluation in April 1972. There has been only one official indication of the status of the schema since the September 1972 deadline for forwarding such evaluations to Rome.

The schema on procedural law sent to the bishops in 1976 stated that canons 397-435 of that document were to deal with administrative procedure. However, the text of the norms was not included in the schema, thus making it impossible to judge whether any changes had been made in the schema as a result of the 1972 consultation.

Green shares some of what the commission on the code revision had in mind:

Among the noteworthy features of the section on the exercise of administrative authority are the following: (a) an administrator must obtain all necessary facts and proofs before issuing a decree; (b) he must make known in writing to the persons likely to be affected the facts and factors under consideration and the reasons for the decree; (c) he must grant a hearing to all whose rights could be injured and afford them the right of counsel unless the delay could be harmful.

The schema provides two main alternatives for recourse against administrative decisions: (a) hierarchical recourse, which has been a traditional feature of the law, and (b) administrative courts, which are a distinctly new development. …

Recourse may be taken to a newly created administrative court if the administrative decree in question allegedly violated substantive or procedural law, the general principles of law or canonical equity, or if the reasons given in it were not true.

It is easy to see how the church would benefit from these kinds of procedures. It is manifestly unfair that, at present, a person who feels he or she has been wrongly terminated only has recourse to a pastor, a bishop or other religious superior who will likely have to overrule someone they collaborate with far more closely than the person who was terminated in order to reach a more just result.

Some will object that a church-run system would still be prone to automatically support decisions made by bishops, but such objections are raised out of historical ignorance and ideological bias. In the long history of the Catholic Church in the United States, many times a pastor would appeal an adverse decision by their bishop to the Sacred Congregation of the Council, forerunner of today's Congregation for the Clergy, and the congregation would side with the priest.

The most famous was in 1892 when Rome ordered the reinstatement of Fr. Edward McGlynn, who had been removed from his rectorship of St. Stephen's Church in New York City because of his vocal support for politician Henry George and his single tax theory.

In 1993, the Congregation for the Clergy ordered then-Bishop Donald Wuerl of Pittsburgh to reinstate Fr. Anthony Cipolla, an accused pedophile, and Cipolla would have won had not Wuerl appealed the decision to the Vatican's highest court and won his case there.

A final thought: While both Supreme Court decisions were correctly decided, many have argued that if the church in the 21st century defines itself in the public square by its opposition to contraception and LGBT rites, our numbers are sure to shrink.

A conversation with any random collection of young people will confirm this to be the case. My concern is different. If I thought oppositions to contraception and LGBT rights were essential Catholic beliefs, then their popularity would not matter.

Column | The Supreme Court is right. That's no excuse for the church to be wrong.