by Michael Sean Winters
Opinion
This article appears in the Synod on the Youth 2018 feature series. View the full series. 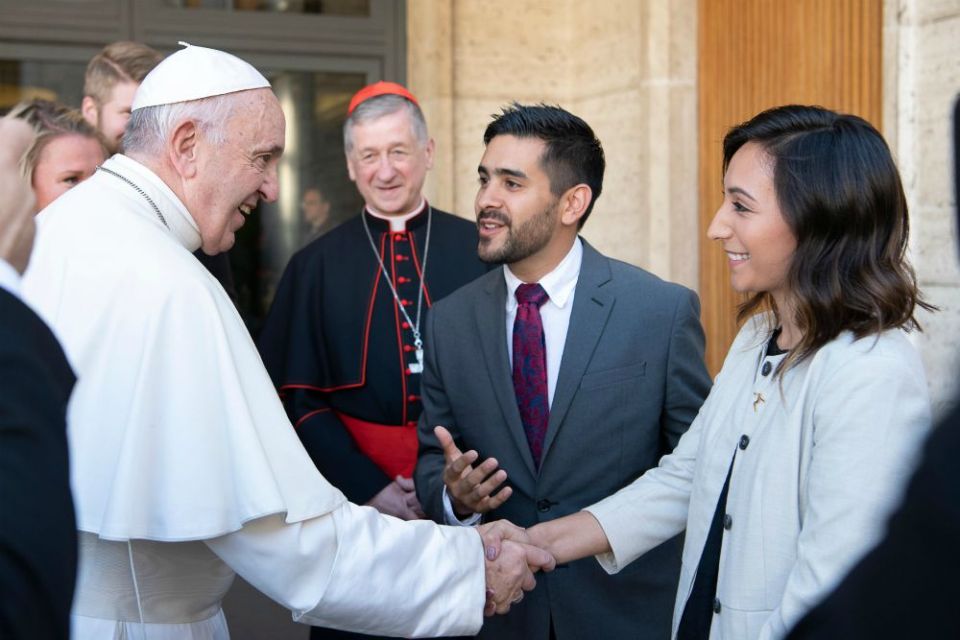 Pope Francis greets synod observer Yadira Vieyra and her husband Juan Miguel Vieyra from Chicago after a session of the Synod of Bishops on young people, the faith and vocational discernment, at the Vatican Oct. 26. Looking on is Chicago Cardinal Blase Cupich. (CNS/Vatican Media)

The synod on youth concluded last weekend, and the reactions to it within the synod hall were quite different from the reactions outside. Participants tended to see the 26-day meeting as a real success. The reactions of non-participants have been illustrative of how myopic some Church observers and advocates have become.

"The synod was a stunning success and that is a sentiment shared by the young people," Cardinal Blase Cupich, who attended the synod, told NCR in an email. He wrote:

They made the event, participating in small groups, making interventions, cheering and clapping (after someone's remarks and during the voting!), in the conversations over coffee breaks, on the pilgrimage, (which I joined), over meals and in their personal visits with the pope. No one should try to diminish what happened because they did not get their word, or a phrase in the document, or because their way of doing things was not observed. This was a triumph for a synodal Church as it put that kind of church on full display and showed these young people — and us bishops too! — how to be Church going forward.

"[T]hese young people — and us bishops too!" There it is. Synodality. Everyone walking together.

When historians come to appraise this pontificate, surely the development of a more synodal church will loom as one of the most important reforms. It is easy to forget the history of the synods, how they tried at first to accomplish too much under Pope Paul VI, then became entirely rote pre-programmed affairs under Pope John Paul II for 25 long years. Pope Benedict XVI introduced the "karaoke hour," assigning the last hour of each day for open-mic time when any synod father could speak to any issue he wished. Finally, Pope Francis has been experimenting with the synod structure, this time breaking up the speeches with more frequent small group discussions, so that there was more back-and-forth. Also, the young people who participated in this synod clearly had an impact on the mood and content of the discussions. This is a work in progress, and it will prove important for all issues facing the church.

Yet, within hours of the ratification of the final document, LifeSiteNews was putting old whine into new whineskins, quoting an anonymous source, identified as "close to the Synod" (whatever that means), who said, "This document opens so many minefields." They were especially upset with the sections of the document that dealt with LGBT issues, even though the final text did not include the acronym that seems so ominous to some, including Synod Father Philadelphia Archbishop Charles Chaput. The archbishop does not think being referred to as "Native American" reduces his personhood to one characteristic, but he thinks the acronym LGBT has that affect on gay people. LifeSite shares his concern.

Conversely, many gay friends will be disappointed that the synod was not more attentive to what, in the West, is a real problem in seeking to evangelize our young people: The church's teaching on homosexuality makes no sense and is experienced as offensive. For gay youth, it is profoundly hurtful. In a statement, Francis DeBernardo of New Ways Ministry, mirrored the objections of LifeSiteNews, focusing on the exact same issues, only in reverse. DeBernardo gets high marks for also praising the synodal process and seeing the hope it brings, something conservative critics can't bring themselves to do.

For synodality to work, interest groups need to learn the virtue of disinterestedness. Is it really expecting too much for us Westerners to sympathize with the fact that our Catholic brothers and sisters in more traditional societies may view gay rights as part and parcel of a set of Western values that have despoiled and exploited their natural resources, kept their democracies fragile, and imported weapons and drugs into their countries? Is it really so hard to see why anyone might be concerned that the breakdown in traditional values harms many people, and they cannot distinguish the harm those traditional values sometimes cause?

On the other hand, the other day, Matthew Shepard's remains were interred in Washington National Cathedral. Is it really expecting too much to hope that everyone everywhere will recognize what was done to him as a gross evil, and a specific evil too, an instance of anti-gay bigotry expressed with inhumane violence? Is it too much to ask if the harshness of our teaching on homosexuality has something to do with the high rates of suicide among gay youth?

What did the synod's final document say? "There exist questions relative to the body, affectivity and sexuality that need a deeper anthropological, theological and pastoral elaboration, to be realized in the ways and at the levels most appropriate, from those most local to those universal," the text states at Paragraph 150. "Among questions emerging in particular are those relative to the difference and harmony between masculine and feminine identity and sexual inclinations." A couple of weeks back, I wrote: "I think the best that could be hoped for on these topics at this is synod is a recognition that the current teachings on both homosexuality and the role of women in the church are inadequate and an encouragement of dialogue at the local and national levels." It seems to me that the synod came to the same conclusion, although the document's comments on the role of women in the church were quite good.

There are two recent intellectual movements, both with their origins on the left, that are clashing on some of these sexual issues and pertain to the important issue of how we enculturate the Gospel. First, and drawn from liberal political theory, since Pope Pius XII's wartime allocutions and then in the Holy See's support for the Universal Declaration of Human Rights, on through the magisterium of Pope John XXIII, the Second Vatican Council, and all subsequent popes, the church embraces the idea that human rights are universal in scope, rooted in the inherent dignity of the human person. Why should this not extend to gay people and their rights? On the other hand, beginning in postwar theological circles, the neo-scholastic view that human acts can be assessed without reference to history or culture, even sexual acts when it is obvious how culturally conditioned sexuality is, has fallen into disrepute, replaced by an awareness of the need to attend to history, culture and conscience. Why should Westerners intent on advancing gay rights be able to run roughshod over more traditional cultures?

This conundrum requires much listening and, on an issue as fraught as homosexuality, I suspect it is far easier to say something that will be misunderstood than to say something that will induce understanding. I think the synod got it right. It is time for deeper theological, anthropological and pastoral understandings. Time to learn. Time to listen.

There must be a willingness to listen to each other if the church is to hold together. Look at how Francis described it in his sermon closing the synod, preaching on last Sunday's Gospel story of Jesus and Bartimaeus:

[M]any of those with Jesus ordered Bartimaeus to be quiet (cf. v. 48). For such disciples, a person in need was a nuisance along the way, unexpected and unplanned. They preferred their own timetable above that of the Master, their own talking over listening to others. They were following Jesus, but they had their own plans in mind. This is a risk constantly to guard against. Yet, for Jesus, the cry of those pleading for help is not a nuisance but a challenge. How important it is for us to listen to life! The children of the heavenly Father are concerned with their brothers and sisters, not with useless chatter, but with the needs of their neighbors. They listen patiently and lovingly, just as God does to us and to our prayers, however repetitive they may be. God never grows tired; he is always happy when we seek him. May we too ask for the grace of a heart that listens. I would like to say to the young people, in the name of all of us adults: Forgive us if often we have not listened to you, if, instead of opening our hearts, we have filled your ears. As Christ's Church, we want to listen to you with love, certain of two things: that your lives are precious in God's eyes, because God is young and loves young people, and that your lives are precious in our eyes too, and indeed necessary for moving forward.

And, later in the same sermon:

It is not Christian to expect that our brothers and sisters who are seekers should have to knock on our doors; we ought to go out to them, bringing not ourselves but Jesus. He sends us, like those disciples, to encourage others and to raise them up in his name. He sends us forth to say to each person: "God is asking you to let yourself be loved by him." How often, instead of this liberating message of salvation, have we brought ourselves, our own "recipes" and "labels" into the Church! How often, instead of making the Lord's words our own, have we peddled our own ideas as his word! How often do people feel the weight of our institutions more than the friendly presence of Jesus! In these cases, we act more like an NGO, a state-controlled agency, and not the community of the saved who dwell in the joy of the Lord.

Synodality is a different approach to untying knots, building consensus, being church. As the Holy Father indicated in this splendid sermon, we must leave room for God to act, and be less interested in advancing our own agendas. It is the only way this Church, spread across the globe, with instantaneous means of communication and miscommunication, can hold itself together in fidelity to the Lord Jesus.

Column | There it is: Synodality

The Vatican's next Synod of Bishops should focus on women

Are Francis' critics scared of the Holy Spirit?