What Archbishop Gregory did, and did not, do 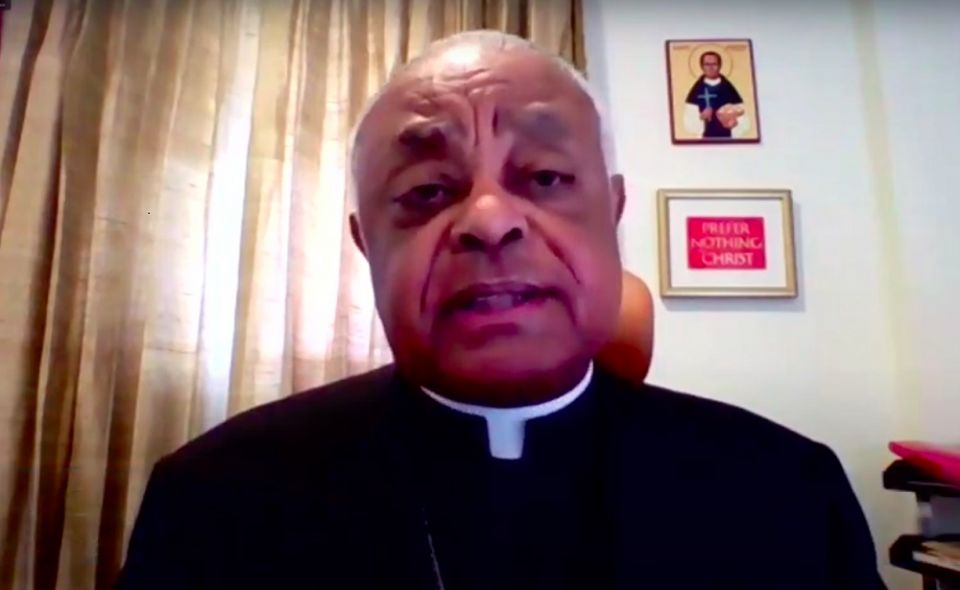 A screenshot shows Washington Archbishop Wilton Gregory speaking during a June 5 online panel discussion hosted by Georgetown University, titled "Racism in our Streets and Structures: A Test of Faith, A Crisis for our Nation." (NCR photo)

Many people, including myself, rushed to Twitter and elsewhere to praise Washington Archbishop Wilton Gregory for his forceful statement distancing himself and the Catholic Church from what was, in reality, a campaign photo-op for President Donald Trump at the St. John Paul II Shrine in Washington.

The visit to the shrine occurred the day after police dispersed nonviolent protesters from the area surrounding St. John’s Episcopal Church with tear gas, and forcibly removed an Episcopalian clergywoman from church grounds, so that the president could have a photo-op at the church.

Others were upset with Gregory for making such a strong statement. Brian Burch, the president of  CatholicVote, a 501(c)4 political organization with no ties to the Catholic Church, issued a statement slamming Gregory for engaging in "a partisan attack" on the president that "needlessly politicizes" the issue of religious liberty, the ostensible reason for Trump’s visit to the shrine. Raymond Arroyo, on his EWTN TV show, said, "Everyone should be welcomed at a Catholic shrine, to begin with, everybody. Pope Francis has said this is a field hospital for sinners. Well, Donald Trump may need that field hospital as well."

That was rich. His guest, Robert Royal, said the statement was "an absolute disaster," repeatedly referred to George Floyd as "George Flynn," and said the deceased was "not a choirboy," a despicable thing to say about a man who had just died and, choirboy or not, did not deserve to die at the hands of a sadistic racist. The entire segment was a repulsive effort to downplay the reality of racism and demean Archbishop Gregory.

I have posed the question before, and pose it again: Why is Raymond Arroyo still on EWTN?

It goes without saying that many Catholics do not have a problem with criticizing a president, provided the president is a Democrat. Remember the way all ecclesial hell broke loose when President Barack Obama was invited to give the commencement address at the University of Notre Dame in 2009, as every president had been asked. I do not recall Arroyo being upset when a South Carolina pastor denied Communion to Joe Biden last year. Is the field hospital closed for Democrats?

On the other hand, an op-ed in the New York Daily News by John Gehring, of the progressive advocacy group Faith in Public Life, was not without a certain richness, too. After praising Gregory, he calls attention to a letter his group organized, signed by some 4,000 Catholic leaders, which made it "clear that there is nothing 'pro-life' about a president whose policies hurt immigrants, worsen the impact of climate change and disproportionately affect communities of color."

I would like to see those same 4,000 Catholic leaders challenge Mr. Biden for his indifference to the need to extend legal protection to unborn life. My politics is closer to that of Gehring than Burch, by a long shot, but both groups are less inclined to challenge their partisan allies than they are their coreligionists.

Now, laypeople are supposed to bring the Gospel into the world, and it should surprise none of us that they reach different political conclusions about what the Gospel demands. They can and should argue with each other, in good faith, about which application is the more accurate.

In the Catholic tradition, however, clergy should not be partisan. So, what did Archbishop Gregory do and, more importantly, what did he not do? He did not endorse Joe Biden. Indeed, if Joe Biden were to wrap himself in religion while refusing to acknowledge the moral obligation to extend legal protection to the unborn, I hope Gregory would slam him as well. I have no problem with a politician saying, "Look, I disagree with the teaching of my church on this point," and I know few Catholics who embrace the "full peacock of church teachings," as a friend calls it.

But be up front, straightforward. What Gregory objected to, as his statement said, was the effort to manipulate the symbolism of a sacred space for a partisan objective.

What the archbishop did was reclaim the Gospel from its being abused by a politician and his religion handlers at the Knights of Columbus. He explained his motivation in greater detail at a webinar held by Georgetown University on Friday.

"When I saw the event take place at St. John's, and the preparatory activity [clearing peaceful protesters with tear gas]," Gregory said, "I said, 'This is awful. This is the use of a sacred place, a sacred, symbolic place to be used as a political ploy.' And I didn't think it was appropriate."

He did not point out that the president's history of race-baiting is what St. Thomas Aquinas would term the "formal cause" of Trump's decision to move the protesters so he could have a photo-op. He didn't have to.

Archbishop Gregory went on to cite St. John Paul II's commitment to human dignity, and here he said something interesting: "His whole life, long before he became the supreme pontiff, he was battling systems that were intended to destroy, weaken or certainly deny human dignity."

He did not explicitly say that the clearing of Lafayette Park was similar to the tactics of fascist and communist totalitarian regimes, making a visit to the shrine on the morrow of that police action especially egregious. He didn't have to.

The statement issued by the St John Paul II Shrine defending the president's visit was an exercise in agitprop. It claimed, "The White House originally scheduled this as an event for the president to sign an executive order on international religious freedom. ... International religious freedom receives widespread bipartisan support, including unanimous passage of legislation in defense of persecuted Christians and religious minorities around the world."

Nice try, but this was a campaign event. There is no evidence bipartisan leaders were invited to be present, even though the issue receives bipartisan support. The executive order itself was a nothing burger, a mere excuse to create the photo-op.

Donald Trump is not the first politician to try and co-opt religion for political gain and he won’t be the last, if even the degree of farce involved in his attempts is unparalleled in history. What Archbishop Gregory did was remind his fellow Catholics and his fellow Americans that however messy and complicated the interactions of politics and religion, the Catholic Church stands for things that transcend the political debates of the moment, that there are uses to which religion should not be put, that there are limits.

Donald Trump and the Knights of Columbus pushed those limits. The archbishop, rightly, pushed back.

Column | What Archbishop Gregory did, and did not, do