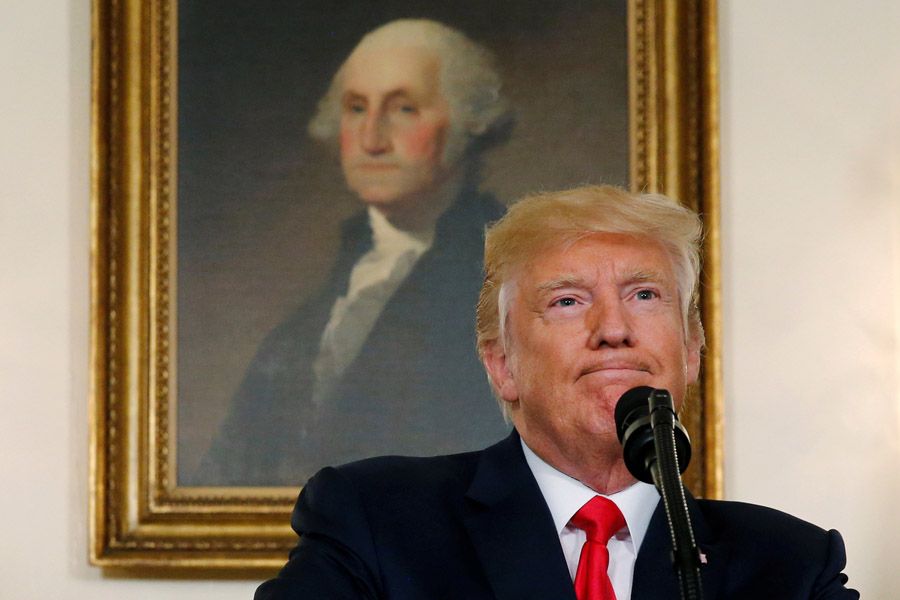 If President Donald Trump totally dominated the political landscape in 2017, and there is no reason to think he will lose his ability to drive the new cycle, in 2018 he must contend with some supporting actors: the economy, health care markets, and the midterm elections.

The GOP, after a year of legislative failure, finally passed a tax bill at year's end. On this issue, Trump and congressional Republicans stood together. The consequence is that the Republicans now own the economy and if it does not live up to the hype surrounding it, voters will make the Republicans pay. Rising is not enough. Rising stock markets are not enough. And increased corporate earnings are not only not enough, they would be counterproductive politically. The test will be this: The Republicans promised higher wages and every analysis of corporate behavior I have seen predicts corporations are more likely to buy back stock than they are to increase wages. Unless wages go up, the Democrats have a tailor-made issue on which to contest the midterm elections.

President Trump and congressional Republicans failed to pass a comprehensive repeal and replace bill in health care. In the tax bill, they did eliminate the individual mandate and it is not certain what effect that will have on insurance markets, though there may be unintended consequences. Strangely, President Trump finished the year bragging as much about the repeal of the mandate as he did the tax reform itself. It will now be almost impossible for him to blame future problems in the health care sector on former President Obama and the Affordable Care Act. The GOP now owns health care and it is an issue that makes voters very, very nervous. Think back to the 2010 midterms when Democrats were crushed on account of the backlash to the ACA.

While legislation was stalled, the president began rolling back all kinds of regulations, especially in the area of environmental protections but in other areas, too, such as consumer protection and financial oversight. It is part of the modern Republican Party's economic gospel that government regulations are bad per se, and certainly their corporate donors are the ones for whom such regulations not only offend their ideology but their interests. But, as a matter of politics, the Republicans deceive themselves. Middle America may be opposed to "government regulation" in the abstract, but they like it in the particulars. They like the fact that their foodstuffs are inspected and if there is a problem, the government orders a recall. Same with car safety. Same with financial security: Does anyone believe that Wall Street learned its lesson in 2008 and that all manner of fund managers are now risk-averse?

Nothing is more particular than an oil spill or a pipeline breach: Specific people and specific towns and specific wildlife are harmed when our environmental protections fail, all of it caught on camera. Any such disaster will most assuredly and appropriately be laid at the feet of Mr. Trump. If Democrats suffer on the issue of climate change because the dangers appear distant and diffuse, the reverse is true for the Republicans and environmental protection. Middle America wants clean water and clean air. And, let's be honest: If Flint, Michigan, was mostly white, there would have been a much greater out cry about the scandal the hit that city when lead pipes were reintroduced.

Which leads to what is the most predictable dynamic in 2018: Whenever Trump is in trouble, he will go to his core wheelhouse, attacking immigrants, picking fights with prominent African-Americans, and making excuses for white nationalists. Looking at the polling data, we can conclude that this race-baiting works with about 35 percent of the voters. The question is whether or not the reaction against the race-baiting will be sufficiently strong to increase turnout in an off-year election.

More than anything else, it is Trump's flirtation with white nationalism and his disregard for democratic norms that will continue to make him more and more toxic. His base will never abandon him, but everyone else is realizing that this man degrades everything he touches. Republican politicians can't do much about it: He owns the party's base. But for all others, from young voters forming lifelong political attitudes to foreign leaders trying to salvage longtime alliances, there must now be a calculus, whether to support or work with Trump when you can, and risk being swept up into his psychodramas, or stay as far away as possible on principle. Increasingly, I would incline to the latter alternative.

Trump will not be on the ballot in 2018, but every election now has the quality of a referendum on his presidency, especially when the race-baiting intensifies. What will Republicans running for Congress do? Would they support the president if he fired Independent Counsel Bob Mueller? As that investigation gets closer to the president himself, how outrageous will Trump become? The possibility of mass deportations is not out of the question. Will Trump's declining poll numbers provoke more intraparty primary fights as happened in Alabama and appears likely in Mississippi?

The Democrats face a difficult map in 2018. In the House, the district lines remain those drawn by Republican legislatures after the 2010 blowout. With fewer and fewer competitive districts, the Democrats need a huge wave in November to reclaim the lower chamber. The upper house is much the same: 26 of the 34 seats that are up for election this year are currently held by Democrats. Of those 26, ten are in states that Donald Trump won in 2016. Of those, two states — Wisconsin and Pennsylvania — Trump won by a whisker. But, Indiana went for Trump by a 19-point margin, and so Democratic Sen. Joe Donnelly will face an uphill battle for reelection. Sen. Heidi Heitkamp, from North Dakota, faces a similar challenge: Trump won her state by a 35-point margin. Trump garnered 69 percent of the vote in West Virginia where Democratic Sen. Joe Manchin is running for reelection.

More than the map, the Democrats have no unifying message. I wish the party would unite behind themes of economic empowerment and opportunity, learn to speak about class issues in moral terms, and field candidates who have at least some of Sen. Bernie Sanders' populist rhetoric in their repertoire. I fear that the left's culture warriors will be the ones calling the tunes in 2018 and beyond. You can win a Democratic primary while being financially beholden to Wall Street, but if you think there should be reasonable restrictions on the abortion license, I don't think you can win a Democratic primary for dogcatcher.

Look at this statement from Colorado Democratic Party Chair Morgan Carroll about last month's hearing of the Masterpiece Cakeshop case:

No one should be refused business simply for being who they are and loving who they love. In Colorado, we enacted laws to protect the rights of the LGBTQ+ community because businesses should not be able to sidestep the fundamental principles of equality that we value as a nation. As Democrats, we believe that no American should be discriminated against for their sexual orientation, race, creed, color, gender, religion, or disability status and we will continue to fight for equal access to services and businesses.