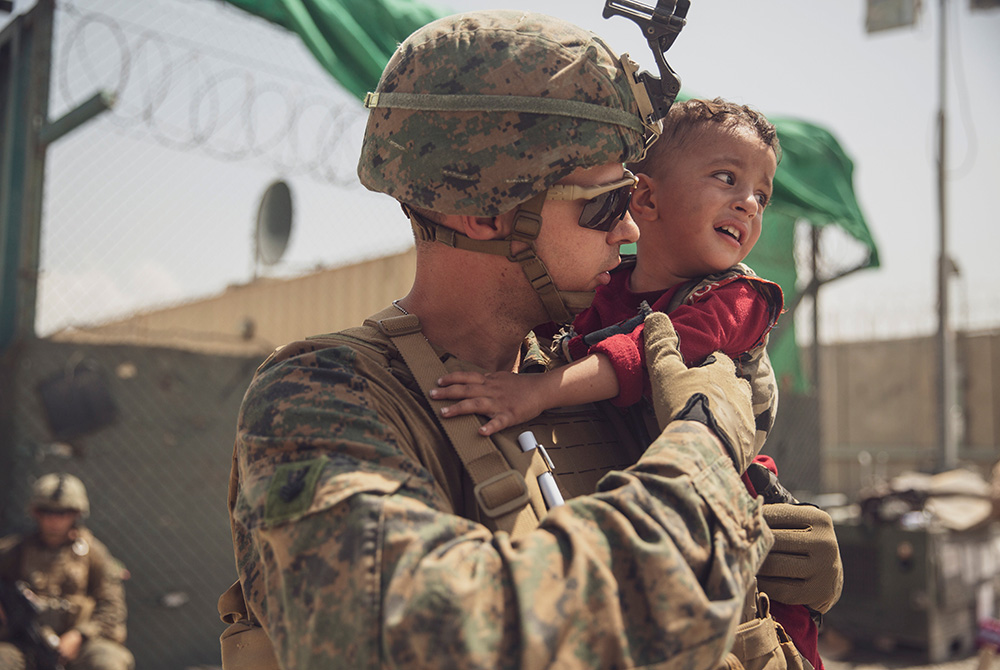 Early on in the "war on terror" — not even four months after the Sept. 11 attacks — the editors of the National Catholic Reporter asked for an alternative to violence and retribution.

"The real insult to those who lost their lives to terrorists would be the stubborn continuation of unsuccessful polices that guarantee only more terror and war," the editors wrote in an editorial published Dec. 21, 2001.

"This time, in Afghanistan, can we expect different results?" we asked. "After all, the world is watching closely, and we have cited the suffering of the Afghan people under the Taliban to help justify U.S. bombing. With our new attentiveness, will we finally begin to face the desperate poverty of that country and see it within a broader context? Will we begin to imagine U.S. complicity in the suffering of the region? Will we begin to repent the way we support dictatorships when it serves U.S. economic interests? Can we finally imagine waging peace, not war?"

Sadly, the answer to those questions has been no.

Now, nearly two decades later, as the Taliban seizes power, the U.S. military is pulling out of what has become the U.S.'s longest war.

Related: In Afghanistan, we made the same mistakes as in Vietnam

The costs, by any measure, have been astronomical: Tens of thousands of people have died, including 2,448 U.S. service members, 3,846 U.S. contractors, 1,144 allied/NATO service members, 444 aid workers and 72 journalists.

The death toll for the Afghan people is even worse: more than 50,000 Taliban and other opposition fighters and 47,245 civilians.

The financial cost of the war is in the trillions of dollars, and because the U.S. borrowed most of the money to pay for it (rather than raise taxes), we will be paying it off until halfway through this century.

And for what? The most touted domestic success — an improvement in the lives of women and girls — has been an uphill battle. A 2017 report found that two-thirds of Afghan girls still did not attend school, not only because of discriminatory attitudes, but also because they did not have access to education.

The improved infant mortality rate, which has declined from 89 deaths per 1,000 births in 2001 to 47 deaths today, still puts Afghanistan at a rate similar to Haiti and other poor nations.

Yes, the U.S. was able to destroy al-Qaida's military bases and training camps, and to take out its leader, Osama bin Laden.

But Americans who have witnessed firsthand the suffering in Afghanistan report little improvement among the poorest in the countryside. Peace activist Kathy Kelly, who has made nearly 30 visits to the country in the past 10 years, describes poverty, desperation and hunger, especially among women, children and widows.

As Kelly told NCR executive editor Heidi Schlumpf, mothers weep because they cannot feed their children more than some stale bread and tea without sugar. Instead of going to school, kids are forced into labor or to scrounge for scraps of food in markets. Access to clean water may require hours of walking down dangerous mountain passes. During the rainy winter, mud houses provide little insulation and newborn babies die of exposure.

And now, those Afghans who worked with U.S. troops, contractors or aid groups are fearful for their lives under Taliban rule, and a chaotic evacuation plan — if you can call it that — seems likely to leave many of them behind. 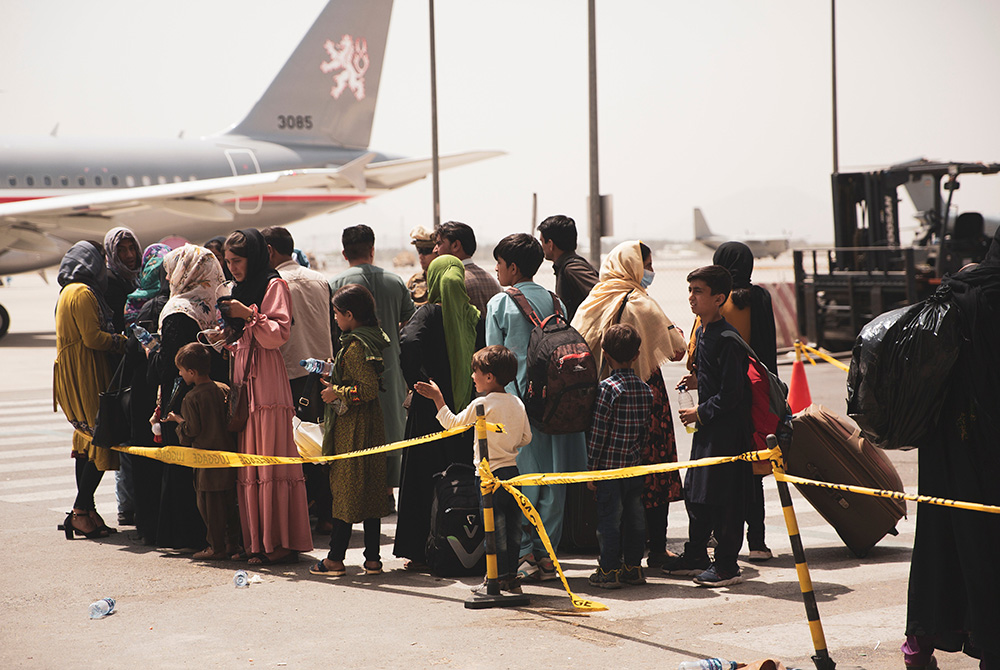 A U.S. Marine comforts an infant while they wait for the mother during an evacuation at Hamid Karzai International Airport Aug. 21 in Kabul, Afghanistan. (CNS/U.S. Marine Lance Cpl. Nicholas Guevara, handout via Reuters)

Even veterans are depressed and angry that their tours in the country accomplished so little.

"The lives, the resources, all the many different things that were wasted on this, and it's not OK. It's frustrating," said Tetreault, who was nearly killed in combat when a rocket-propelled grenade struck her convoy on one mission.

What can Americans do now? We can expand our acceptance of refugees from Afghanistan, and other war-torn countries, while we're at it.

And vow not to do it again.

Another NCR editorial, this one two days before the U.S. bombing in Afghanistan began in October of 2001, urged nonviolence as a practical strategy.

The argument: "Jesus taught nonviolence. The earliest Christians followed the way of nonviolence. Nonviolence teaches that violent acts have practical consequences: They cause harm to the person who engages in them. They add to the cycle of violence and they do not achieve their stated purpose. Nonviolence is not simply a goal, an end; it is a way of life."

We also quoted now-St. John Paul II, who tried to convince the first President George Bush not to start the first Iraq war. He said killing "leaves behind a trail of resentment and hatred, thus making it all the more difficult to find a just solution of the very problems which provoked the war."

The pope's plea for "Never again war! No, never again war" was not heeded then, nor by the second President George Bush, who took the U.S. into conflicts in both Afghanistan and Iraq. Perhaps our country's second Catholic president will listen. When will we ever learn?

A version of this story appeared in the Sept 3-16, 2021 print issue under the headline: After Afghanistan, will we wage peace or war?.