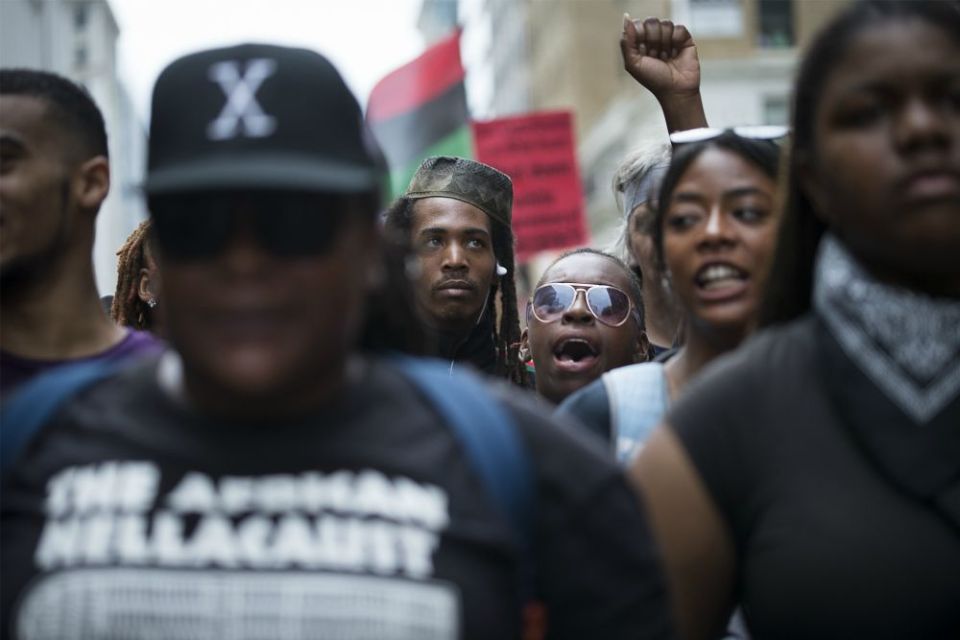 Black Lives Matter demonstrators are seen near Lafayette Square in Washington Aug. 12 during the start of the white nationalists' rally "Unite the Right 2." (CNS/Tyler Orsburn)

Out of the clutter and chaos of the meeting of U.S. bishops in Baltimore came a few bright spots of hope. One of them was the bishops' assent to the effort underway for the canonization of Sr. Thea Bowman, a Mississippi native and the only African-American member of the Wisconsin-based Franciscan Sisters of Perpetual Adoration.

For those who encountered Sister Thea's preaching and evangelizing, she's already a saint. The rest is formality. (For a deeper look at her fascinating life and ministry, go here.)

It was fitting to celebrate this champion of African-American Catholics during the same meeting that the bishops issued another letter on the country's original sin, racism (three previous are listed in the document's footnotes).

The letter, in many respects, is a worthy addition to the corpus. It will serve as a solid introductory teaching document both in terms of its reading of history — including some of the church's role in engaging that original cultural sin — and its depiction of the need to raise the issue anew.

"Racism still profoundly affects our culture, and it has no place in the Christian heart," write the bishops. "This evil causes great harm to its victims, and it corrupts the souls of those who harbor racist or prejudicial thoughts. The persistence of the evil of racism is why we are writing this letter now. People are still be harmed. So action is still needed."

If only the sense of urgency so correctly conveyed in those few lines were sustained throughout the rest of the document. If only the call to action involved more than personal development and education and instead challenged the community. Truthfully confronting racism requires personal conversion. But racism is also a social sin that requires action in the public square. It is no secret that the sin today is being embraced at the highest levels of government and tolerated for political gain.

The letter certainly contains hints of where this should go: "The evil of racism festers in part because, as a nation, there has been very little formal acknowledgement of the harm done to so many, no moment of atonement, no national process of reconciliation and, all too often, a neglect of our history."

Institutions, laws and practices still exist that deny equal access and justice to too many people. "We cannot, therefore, look upon the progress against racism in recent decades and conclude that our current situation meets the standard of justice," the bishops write. "In fact, God demands what is right and just."

Following a recitation of historic details, the call to action is a rather safe and repeated call to education — for ourselves, for others, for the country. The bishops seek a reworking of societal structures so that life is more equitable to all, including people of color.

There is little attempt to connect what is going on in the culture, such as White House outbursts, displays of white supremacy in Charlottesville, Virginia, and other very real events.

Reading the times today isn't difficult. Racism that once may have remained politely sub rosa, a kind of muted theme in everyday life, has risen again to the surface, a blatant affront to human dignity and all that is decent.

Why not say that the letter is needed today because we have, in the Oval Office, a president whose comments have gone from dog whistle to bullhorn and that those comments are used regularly to energize his political base?

Why not say that the letter is needed because we have in office a president who does not distinguish between violent white supremacists and those who become their victims, or that the language he uses to vilify and denigrate immigrants of every ethnicity, but particularly Hispanics and Muslims, spawns hatred and leads to violence?

Why not say the letter is needed because people of color are the primary targets of deliberate campaigns to disenfranchise voters?

Is it possible that the bishops could not find in our sacred texts strong words that condemn oppressors? Could they find no prophetic witness in our history to emulate? Why the reticence?

The letter is reminiscent of the cautious approach taken by white religious leaders in the South during the civil rights era, one of them a Catholic bishop, who consequently received the Rev. Martin Luther King's stirring 1963 letter from Birmingham Jail. There was no longer any persuasive case to be made for moderation and waiting.

"I must confess that over the past few years I have been gravely disappointed with the white moderate," wrote King. "I have almost reached the regrettable conclusion that the Negro's great stumbling block in his stride toward freedom is not the White Citizen's Counciler or the Ku Klux Klanner, but the white moderate, who is more devoted to 'order' than to justice; who prefers a negative peace which is the absence of tension to a positive peace which is the presence of justice … who paternalistically believes he can set the timetable for another man's freedom."

This is not a time to be politically cunning or exceedingly patient. The sin, we know, must be named. No number of conservative judges is worth the tradeoff in hatred and bigotry being generated by this president and some of his followers.

A version of this story appeared in the Nov 30-Dec 13, 2018 print issue under the headline: Pastoral letter on racism lacks sustained urgency .

After 1967: Detroit Catholics worked to overcome sins of racism