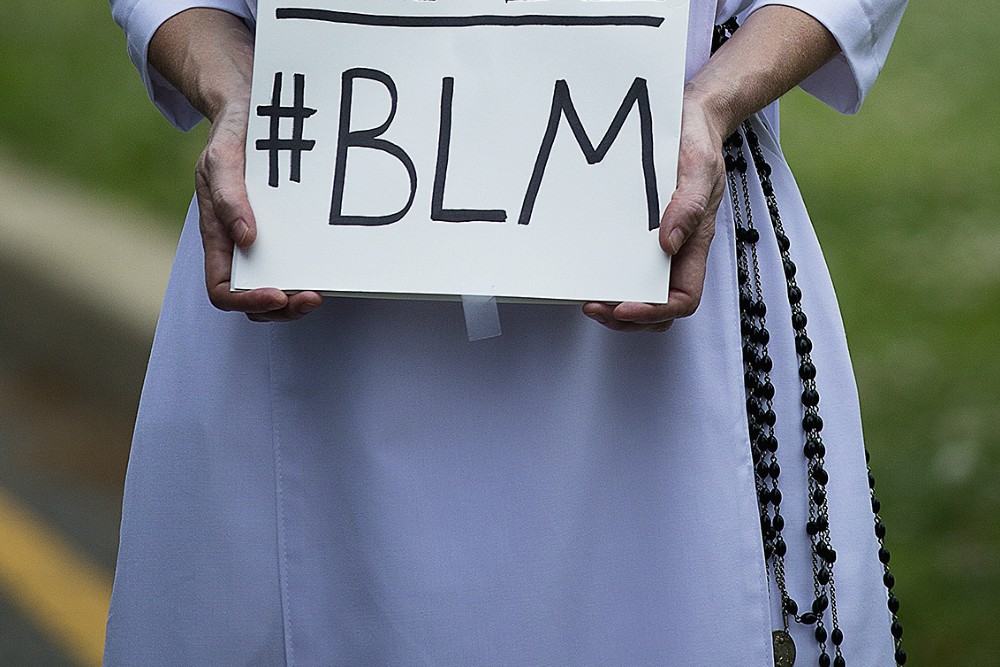 On the last day of the 2020 assembly of the Leadership Conference of Women Religious, its members were invited to participate in a "five-year commitment to work on dismantling racism … in LCWR's efforts to name and eradicate racism within themselves, their congregations, their ministries, and LCWR as an organization."

Details of this commitment are being developed. It had been announced in June to the membership of the country's largest organization of leaders of women religious congregations.

Throughout the 2020 assembly, held virtually Aug. 12-14, speakers emphasized the need for racial justice in their addresses, prayers and reflections.

The commitment to dismantling racism was the first of three initiatives underscored by LCWR officers in a summary of their members-only Aug. 14 session. The summary said religious orders and the wider world are facing a "crucible moment," in which "the pandemic, racism, climate change, and concern for the future of religious congregations, have converged to create a period of 'daunting challenge.' "

That the resolution on dismantling racism was listed first among the three initiatives is indicative of the leadership role that women religious are playing in the Catholic Church in confronting and trying to excise the roots of racism within their congregations and themselves.

Moreover, it demonstrates that this is not an ancillary exercise, but rather an integral responsibility that LCWR leadership believes is crucial to religious life. This stands in contrast to the U.S. bishops, who — as we have pointed out before — have been largely silent about denouncing racism, acknowledging the church's historical role in promulgating slavery, and promoting racial justice.

Yes, the bishops' conference issued a statement as protests mounted against the tragic killing of George Floyd, following an earlier statement by seven bishops who are chairmen of various committees. (Women religious congregations also spoke out against the brutal killings of Floyd, Breonna Taylor, Ahmaud Arbery and others.)

But the actions by LCWR and its membership congregations speak to a deep recognition of the need to stay focused on the issues of racism and racial injustice. It is a commitment that the bishops and the larger U.S. church would be wise to emulate.

This latest initiative by LCWR builds on a painful process that began at its 2016 assembly, when Shannen Dee Williams, a historian at Villanova University, presented painstaking research of how women religious congregations had discriminated against Black women, barring them from entering their communities.

The examples were in jarring juxtaposition to the oft-recounted efforts by Catholic sisters who had marched in Selma and worked to dismantle some racial barriers. Williams' session rocked many members, who invited her to address their own congregations and opened their archives to her.

The session also provided a foundation for the assembly's resolution that year, which committed LCWR members to "examine the root causes of injustice, particularly racism, and our own complicity as congregations and to work to effect systemic change."

The focus on reckoning with racial injustice within women religious congregations continued at the 2018 assembly, with a recommitment to the assembly's 2016 resolution "to go deeper" into the critical work of examining the root causes of injustice and sisters' historic complicity with racism.

Some congregations had done their own homework, prompted by Williams' research, finding women who had been rebuffed in efforts to join their orders, and offered apologies. Others had also begun to research and start to atone for their congregations' complicity with slavery. Still others conducted monthslong study sessions into structural racism and white privilege still ingrained in themselves, their congregations and society.

It is against this backdrop that the statements of women religious resonate and become more than statements. Bishops should make a full examination of racism and racial injustice a priority for their dioceses and parishes — yes, even amid this most challenging pandemic, which has laid bare the inequities in health care and economic parity.

The National Black Sisters' Conference issued a powerful statement in June, offering a challenge to the bishops: "If the most recent pastoral letter on racism, 'Open Wide Our Hearts,' written by the United States Conference of Catholic Bishops, is to have any moral legitimacy, then our episcopal leaders must give more than lip-service to addressing the sin of racism that is destroying communities of color around this nation."

We echo this call for a concerted and focused attention on these issues by our bishops.

This story appears in the LCWR 2020 feature series. View the full series.
A version of this story appeared in the Aug 20-Sept 2, 2021 print issue under the headline: Bishops should follow sisters' lead in dismantling racism.