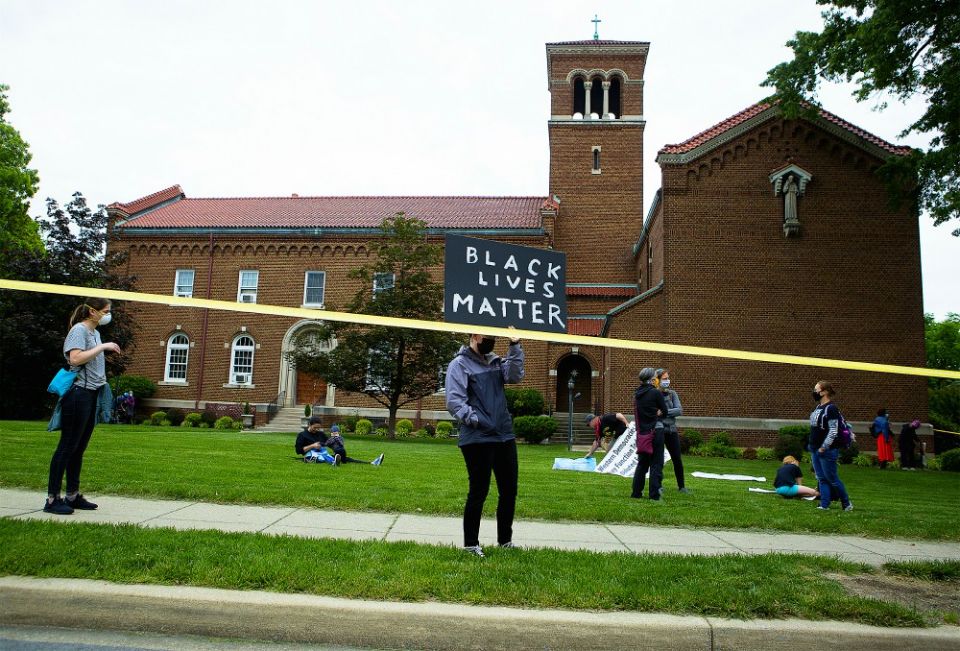 The U.S. bishops' conference has been flatfooted when it comes to addressing the persistence of racial injustices in this country, epitomized by the murder of George Floyd.

Individual bishops have issued strongly worded statements. Bishop Mark Seitz's silent prayer while kneeling with a Black Lives Matter poster in El Paso, Texas, was the most powerful statement by a U.S. prelate to date.

Publicly shaming the Knights of Columbus for hosting the president took some courage.

Still, the weak tea the U.S. Conference of Catholic Bishops as a whole has offered is indicative of an anemia that has been growing for some time within the higher ranks of the church. The Catholic Church, including the bishops, was once engaged with issues of social justice in this country.

After the U.S. entered World War II, the bishops issued a pastoral letter to guide U.S. Catholic involvement in, and attitudes toward, the war effort. They went out of their way to point out that racial problems were not only found in Hitler's Europe.

"The war has brought to the fore conditions that have long been with us," the letter said. "The full benefits of our free institutions and the rights of our minorities must be openly acknowledged and honestly respected. We ask this acknowledgement and respect particularly for our colored fellow citizens."

Washington's Cardinal Patrick O'Boyle, who was no liberal, nonetheless helped to organize an Interreligious Committee on Race Relations in June 1963 and, two months later, rejecting the advice of his advisers, he agreed to deliver the benediction at the Rev. Martin Luther King Jr.'s March on Washington.

In 1986, the bishops issued the pastoral letter "Economic Justice for All," which recalled that the "nation was born in the face of injustice to native Americans" and that "slavery stained the commercial life of the land through its first 250 years and was ended only by a violent civil war."

Despite the text's dominant emphasis on the common good, the bishops recognized the ways minorities were still the object of unjust discrimination: "Where the effects of past discrimination persist, society has the obligation to take positive steps to overcome the legacy of injustice."

The letter sparked an important national debate, although our acquisitive, materialistic society ultimately failed to take up the challenges the bishops articulated.

What major issues have captured the attention of the bishops' conference the last few decades?

There was a long debate about the translation of the Roman Missal and other liturgical prayers. There has been the yearslong fight against a morally permissible government mandate that health insurance plans cover contraception.

Who can forget the postcard campaign against the Freedom of Choice Act, a phantom target but useful to demonstrate hostility to the incoming administration of President Barack Obama? And while the conference as an organization took no stance, the obscene overreaction to Obama's honorary doctorate and speech at the University of Notre Dame?

No wonder the bishops are flatfooted this summer. Their once strong commitment to social justice, the involvement with interreligious groups that fight racism, their willingness to put the prestige and the power of the church's substantial institutional footprint at the service of those who have been marginalized — all in the distant past.

The immediate past has been characterized by an inward focus in which the concerns of the sacristan have trumped the demands of the Gospel.

One bishop stands apart for his repeated call for an outward-looking church, one that goes to the margins to find its inner strength: the bishop of Rome. Pope Francis delivered a sermon last week, commemorating the anniversary of his first trip outside Rome as pope to the island of Lampedusa, where migrants frequently died trying to cross the Mediterranean from North Africa to Europe.

"Encounter and mission must not be separated," the pope said.

"In our effort to seek the Lord's face, we can recognize him in the face of the poor, the sick, the abandoned, and the foreigners whom God places on our way. This encounter becomes also for us a time of grace and salvation, and summons us to the same mission entrusted to the Apostles."

The successors of the apostles, the bishops, should follow the pope's lead and begin to look outward again.

A version of this story appeared in the July 24-Aug 6, 2020 print issue under the headline: Our inside-out bishops need to look outward again .

Encyclical on environment stimulates hope among academics and activists