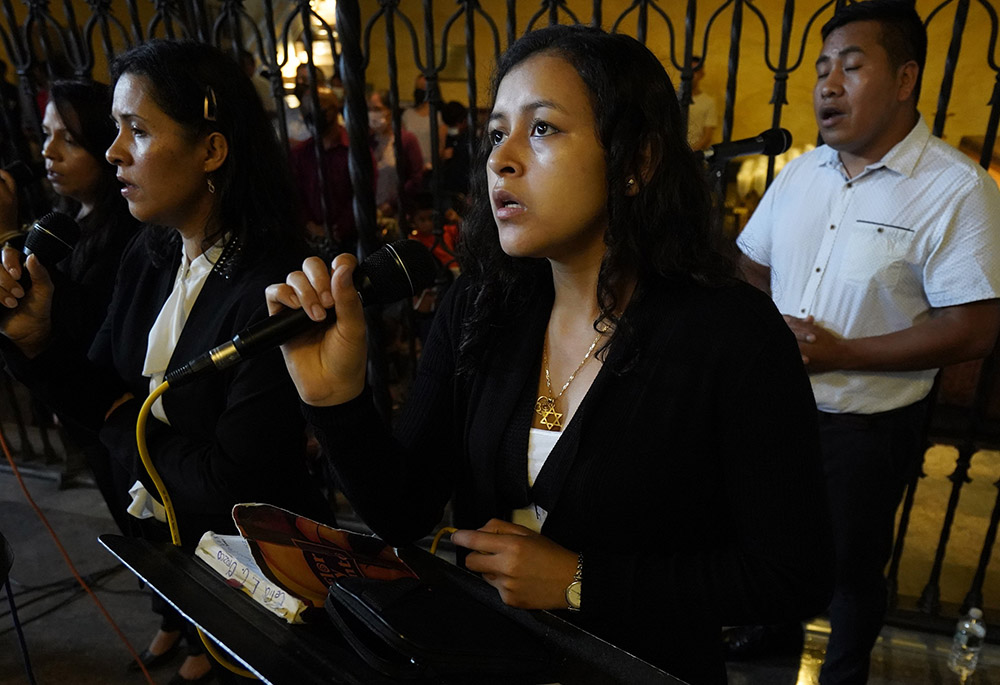 Members of the choir of Our Lady of Loretto Church in Hempstead, New York, sing during a Spanish-language Mass Sept. 6, 2021, at Immaculate Conception Seminary in Huntington, New York. (CNS/Gregory A. Shemitz)

Notably, nearly a quarter of attendees at the conference were young people.

Speaker after speaker voiced glowing support for a thriving Hispanic ministry in the United States, but pastors and parish ministers who spoke to NCR said the reality on the ground was not so rosy: that a lack of resources not only hinders their work but communicates that Latinos are not a priority in the church.

Related: 'Pay attention and do something': Gathering urges investment in Hispanic ministry

Latino Catholics make up roughly half of the U.S. church today, and, because of the growth in the Hispanic population, are on track to soon become the majority of the U.S. church. Already 60% of Catholics under the age of 18 are Latino. At the same time, the percentage of U.S. Hispanics who identify as Catholic is declining, indicating an urgent need for ministries that serve this population.

Yet only a quarter of U.S. parishes offer ministries directed to Hispanics, usually one or more Masses in Spanish, according to data compiled before the V Encuentro process in 2018. A previous study of Hispanic ministry, in 2014, found 172 (out of 196) dioceses and archdioceses had formal structures serving Hispanic Catholics.

The percentage of Latino clergy do not match the proportions in the pews, but the percentage of laypeople in formation programs who are Hispanic does. Yet the Encuentro data said 20 dioceses containing 26% of the Hispanic Catholic population did not report any lay ecclesial ministers in Hispanic ministry.

At the Hispanic ministry conference, one pastor said he had trouble finding bilingual materials for his parish's programs for Latinos. A diocesan director of Hispanic ministry compared his work to that of a soldier sent to battle without equipment. "They send us into ministry but they don't provide the budget, the resources, and we cannot do miracles," he told NCR.

Of course, Hispanic ministry is more than just providing materials in Spanish. It doesn't have to be a separate parish or diocesan "track," but it requires investment nonetheless. In fact, speakers at the V Encuentro noted, "There aren't two Catholic churches in the United States. ... Our journey, our joys and our sadness, our hopes and frustrations are an integral part of the journey of the church in this country."

But the Encuentro also called for a pastoral plan for Hispanic leaders; parish-level communities to bridge the gaps between parents, children and parish leaders; and more paid positions for those in youth and young adult Hispanic ministry.

That was four years ago. If anything, parishes and ministries in Hispanic and Black communities have taken a hit because of the COVID-19 pandemic. But if the U.S. bishops can find $28 million for a five-day eucharistic revival, they can find money to support these essential ministries that will transform our church.

Already, Latino Catholics' emphasis on a relational faith, a less hierarchal ecclesiology and a realistic worldview that is sympathetic with the human condition is changing the U.S. church for the better.

It's time for all Catholic institutions — parishes, dioceses, schools and universities, and, yes, publications — to invest resources in ministries that center Latino Catholics. After all, it won't be long before Hispanic ministry is just called "ministry."

A version of this story appeared in the May 13-26, 2022 print issue under the headline: Hispanic ministry is crucial to church's future.