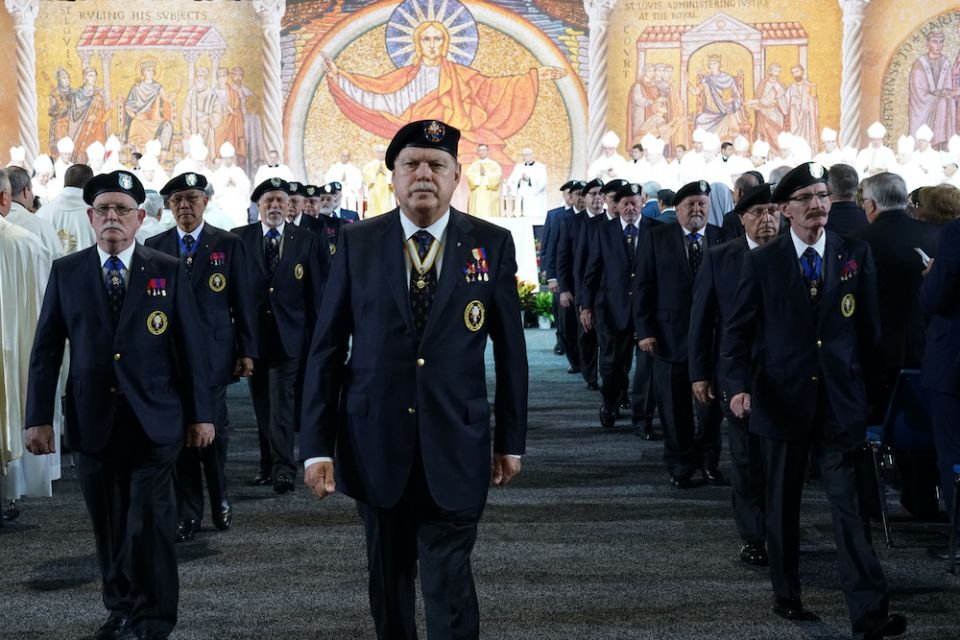 Hundreds of members of the Knights of Columbus have petitioned the group's Supreme Chaplain, Baltimore Archbishop William Lori, in response to President Donald Trump's June 2 visit to the Knights-owned St. John Paul II Shrine in Washington, D.C. The visit came one day after the administration ordered the use of tear gas to disperse a protesting Black Lives Matter crowd for another religiously-themed presidential photo op.

Lori should respond to the petitioners' concerns about politicking and the organization's own history of prejudice and racism.

Some Knights, including NCR columnist Fr. Peter Daly, have decided to quit after decades of membership; others are threatening to quit.

Clearly, this example of overt partisan posturing proved the tipping point for many members, who likely joined the organization looking for opportunities for service and camaraderie, not political controversy. Even the Archbishop of Washington felt the need to issue a public statement, calling the decision to move forward with the long-planned Trump event "baffling and reprehensible." A D.C. chapter, made up of black members, agreed, denouncing the visit.

But those who have been following the national Knights organization — and its leader Carl A. Anderson — know this stunt is just the latest in a well-documented history of questionable, partisan involvement on the part of the 138-year-old fraternal organization. Founder Fr. Michael McGivney would hardly recognize today's Knights, which has morphed into one of the world's largest insurance companies, not to mention a successful conservative influencer and funder.

Anderson himself is a former political operative and legislative assistant to Sen. Jesse Helms of North Carolina, a segregationist who opposed civil rights. During Anderson's two decades at the helm of the Knights, the organization has grown in size and influence. In the past decade, it has given $1.55 billion to charity.

But not all those charities are soup kitchens and homeless shelters. Instead, the Knights have funded conservative think tanks and news outlets (including EWTN), the Susan B. Anthony Foundation, individual dioceses and the U.S. bishops' conference, according to NCR's reporting in 2017.

A number of Knights donations over the years have been to anti-gay initiatives, an earlier NCR report uncovered.

One of the largest recipients of Knights' largesse is the St. John Paul II Shrine, initially a project of the Detroit Archdiocese, which lost $34 million after selling the facility to the Knights for $22.7 million in 2011. This, at a time when that archdiocese was closing schools and parishes in poor neighborhoods. 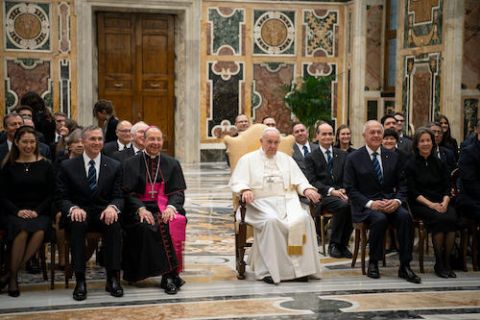 Pope Francis is seated next to Archbishop William Lori of Baltimore, left, and Supreme Knight Carl A. Anderson, right, of the Knights of Columbus during an audience with a delegation from the Knights of Columbus at the Vatican Feb. 10 to celebrate the 100th anniversary of the organization's active presence in Rome. (CNS/Vatican Media)

When Donald and Melania Trump awkwardly stood in front of the statue of the late pontiff at the shrine, the message couldn't have been clearer than if they had worn "Seeking Catholic votes" signs around their necks. Just as the photo op outside St. John's Episcopal Church the night before, in which Trump awkwardly held up a Bible, was a blatant attempt to solicit evangelical Christian votes. Both electoral segments will be necessary for the president to overcome his declining approval and poll numbers.

That the country had exploded in protests over the unjust killing of African Americans and persistent racism seemed to have been lost on a leader who has exploited racial and other divides to his advantage. It was not lost, thankfully, on those Knights who finally decided to vote with their feet.

Those who choose to remain should continue to pressure the group to return to its roots of fraternity and service. The Knights' forays into right-wing politics works against that mission.

Related: Decrying Trump shrine visit, petition calls on Knights to address racist past
A version of this story appeared in the June 26-July 9, 2020 print issue under the headline: Knights finally waking up to organization's politicking .

Being a grandparent is about being in awe