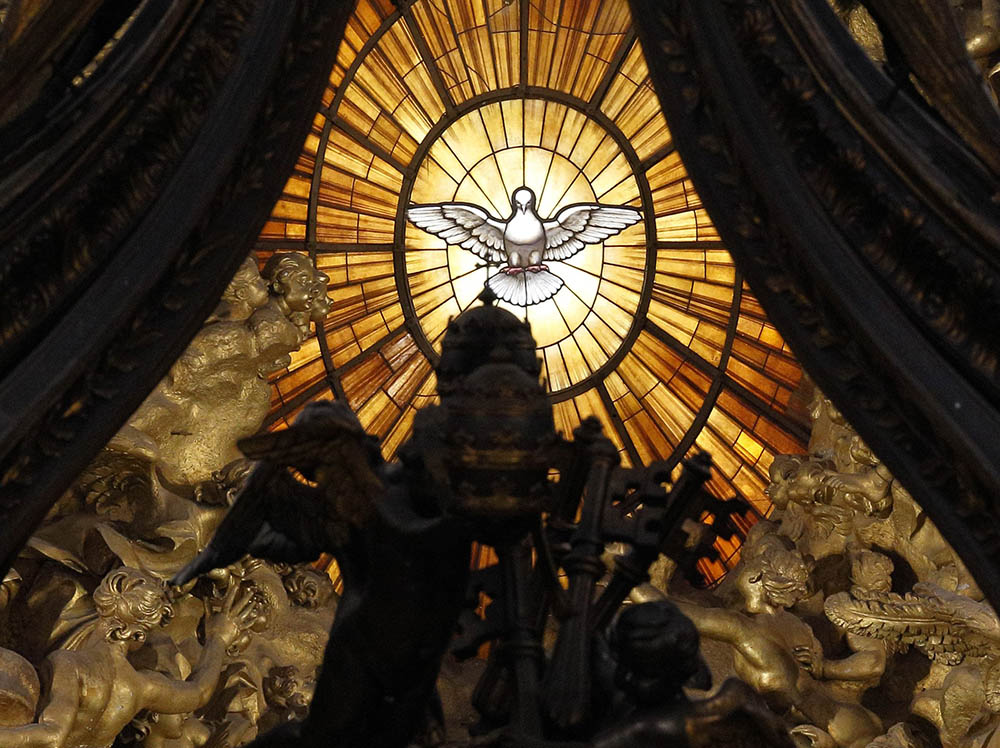 The Holy Spirit window is seen through the baldacchino in St. Peter's Basilica at the Vatican. (CNS/Paul Haring)

When we learned that the topic of the next Synod of Bishops would be synodality itself, you could hear the collective groan in the (virtual) newsroom. A process about a process: What could be duller? Even worse, it's a long process — starting this fall with six months of local consultations and ending in 2023 with the gathering of bishops and others from around the world at the Vatican.

The results of diocesan listening sessions are to be compiled into "synthesis" documents, which in turn form the basis for two working documents in advance of the 2023 meeting. A final document will come from the synod participants, to be followed by a post-synodal document from the pope.

Yet, according to yet another document (the preparatory document or "handbook"), "The purpose of this synod is not to produce more documents." Such irony.

Rather, the handbook continues, the synod "is intended to inspire people to dream about the church we are called to be, to make people's hopes flourish, to stimulate trust, to bind up wounds, to weave new and deeper relationships, to learn from one another, to build bridges, to enlighten minds, warm hearts, and restore strength to our hands for our common mission."

Well, if you put it that way. Inspire dreams? Build bridges? Warm hearts? Lord knows the church — indeed, the world — could use some of that.

Synods of bishops have been around for more than half a century, but it has been Pope Francis who has made them a centerpiece of his more collegial style of governance and reformed them from being merely "rubber stamp" events. This pope has called major synods on the family (in 2014 and 2015), on young people (in 2018) and on the pan-Amazon region (in 2019).

This next synod is clearly meant to establish the process as one that will continue after his pontificate.

Done properly, synodality can change the ways we relate to one another in the church. It's more dynamic, more inclusive, a "deepening [of] the vision of Vatican II," according to Rafael Luciani, one of three Latin American theologians invited as expert advisers for the theological commission of the secretariat for the next synod.

"A synodal vision challenges us to transform clericalist practices in which an individual or a group in the church makes decisions without listening and consulting, as if existing beyond the people of God," Luciani said in an interview in NCR. "Synodality demands that we listen and engage in dialogue to establish binding relationships that build church."

Synodality is not representative democracy, to be sure, but it does involve empowering the laity in ways that "acknowledge the need for representation," Luciani said.

We can learn much about synodality from our Latin and South American brothers and sisters, who have seen this way of being church modeled through the regional Latin American Episcopal Council (CELAM) and its collegial gatherings at Medellín, Colombia; Puebla, Mexico; Aparecida, Brazil; and others.

Yet already the upcoming synod has been assailed from both the left and the right. Some conservative Catholics seem opposed to the very idea of synodality, while others are critical of how this pope practices it, including his openness to all voices, especially those from the "peripheries," which includes those outside the church.

Conservative critics say they are concerned that the synod will foster division in the church and undermine the church's established teaching and authority.

But conservatives aren't the only ones worried that the other "side" will hijack the process. Former Ireland President Mary McAleese, speaking at a gathering in England, predicted a "sanitizing of feedback" because the local listening sessions will be summarized by national episcopal conferences.

This model of "gagged synodality" is unlikely to deliver an "ecclesial spring," McAleese said. "More likely it will simply prolong the ecclesial winter and ice over the green shoots of hope."

Perhaps this pessimism understandably comes from the Amazon synod, in which the pope's final document did not grant the synod bishops' request to open priestly ordination to married men and the diaconate to women.

In addition, whether women participants in the upcoming synod will be allowed to vote on the proposals — as do nonordained religious brothers — is still unclear, and insistence that "it's not the vote that counts" by cardinals who can vote is not helpful. Nothing undermines a process of "journeying together" more quickly than separating people into classes based on gender.

Yet despite the concerns and controversies, we urge Catholics — especially marginalized Catholics — to participate in the synodal process. It may not be a perfect process, but the church is more likely to address the needs of the people of God with it than without it.

We should take this process seriously, as Francis recently urged Catholics of the Rome Diocese to do, adding: "The Holy Spirit needs you."

This story appears in the Synod on Synodality feature series. View the full series.
A version of this story appeared in the Oct 1-14, 2021 print issue under the headline: Let's give the Holy Spirit a chance at synod.