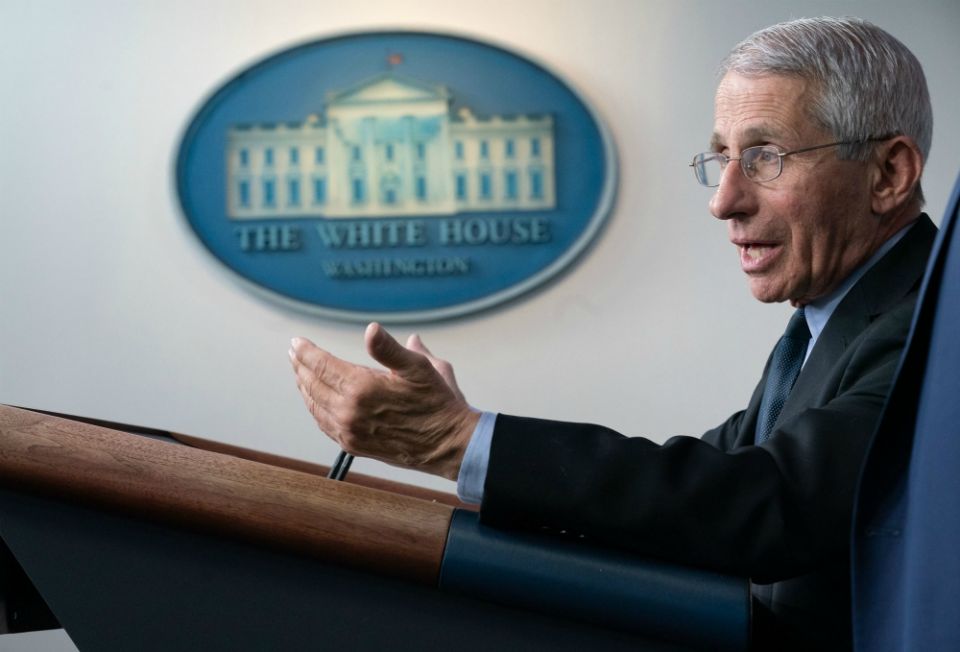 Dr. Anthony Fauci, director of the National Institute of Allergy and Infectious Diseases and a member of the White House Coronavirus Taskforce, speaks during a coronavirus briefing March 16 at the White House. (Official White House Photo/D. Myles Cullen)

We've reached the point in the fight against coronavirus, this awful and unseen enemy, that lays bare the truth that the evangelists of self-sufficiency and libertarian excess bow before a false god. May the lesson be indelibly inscribed on the minds of the generations soon to move into positions of leadership. We need one another.

We're learning a lot in this time of deep trial. We're coming fast on an understanding anew that facts matter, as does character and empathy in our leaders. Government, it became clear in a few short weeks, is the only entity capable of responding to a nationwide threat. And the success of that response depends on respect for the everyday functions of government, for essential bureaucracies that are easy targets for mockery until it is clear they are key to fighting a threat such as the coronavirus pandemic.

A series of sermons developed by the Rev. Dr. Martin Luther King Jr. contains the line: "Nothing in all the world is more dangerous than sincere ignorance and conscientious stupidity." We've recently been served an enormous helping of each, except that in this case the stupidity can't even be categorized as conscientious. It is wanton.

We're learning how dangerous it is when clueless leaders alienate and demean expertise and dedicated service. That President Donald Trump insists on labeling the pandemic the "Chinese virus" merely wraps ignorance in racism.

The curtain's been pulled back and what's revealed is not a wizard but a doddering old man who has run through his supply of bombast and disguises. Trump's mishandling of the coronavirus crisis to this point is more than bumbling. From his earlier dismantling of the White House global health team to the dismissal of early warnings from experts, to the persistent — and completely false — assurances that the virus would miraculously disappear, the mindlessness of this administration is astounding. It constitutes an arrogant and callous disregard for the welfare of others and a deep breach of public trust.

The daily briefings from the White House have become a kind of cringe-worthy performance art, with experts having to awkwardly dispute untruths and fantasies that Trump perpetuates. It led Dr. Anthony Fauci, head of the National Institute of Allergy and Infectious Diseases (hat tip to Jesuit education from Regis High School in New York through College of the Holy Cross in Worcester, Massachusetts) to finally acknowledge the frustration in hearing the president deliver incorrect information. "But I can't jump in front of the microphone and push him down," he told an interviewer.

Ignorance and stupidity are not solely the province of civil leaders. They exist in abundance in religious circles, for instance, among evangelical extremists ignoring expertly detailed evidence to the contrary and inviting congregations to gather. The two characteristics were also exhibited to breathtaking degree in the Catholic community by First Things editor R.R. Reno and by the irrepressible Cardinal Raymond Burke.

Who can guess Reno's motivation for taking the holier-than-thou contrarian route and urging that churches remain open and conduct services? On the other hand, we're accustomed to the good cardinal's eccentricities, most of which, given his current removal from any perch of power, can be ignored. But his encouragement to his determined base of admirers and others who find some solace in his traditionalist formulations is downright dangerous in the current moment.

The recent Sunday Gospel reading about the healing of a blind man is apt to our circumstance today. The takeaway rests not on the legalists of the day who would have prevented the healing on the Sabbath but on Jesus' disregard for the rigors of law when it came to helping the other. That's the mandate for this day, and if our faith can't recognize that or is not up to that task, then perhaps something's been missing in all those times we were gathered in church.

It is no small irony that as Sen. Bernie Sanders' campaign appears headed toward the exit, the party that loves to mock his social and economic vision is becoming socialist to a degree that would make a Marxist blush. As the potential consequences of the pandemic became clearer, Congress quickly passed two bills designed to alleviate the effects. The first provides $8.3 billion for measures to fight the virus. The second bill is a $100 billion measure that expands paid sick and medical leave for some workers, provides free testing for the virus for anyone, and extends unemployment insurance and food assistance programs.

At this writing, a third bill, and the most ambitious, a nearly $2 trillion package, is stalled in the Senate as Democrats seek greater guarantees of accountability over how billions are spent and argue for conditions on bailing out corporations, as well as consideration of workers before businesses. The package would include direct payments to most Americans as well as help for small businesses.

In the aftermath of 9/11, we often said to one another that the world had changed. In the worst ways, it actually had not changed much. Not when we answered violence with even more violence; not when what we were told we could do was to go shopping.

This is an even more widespread and potentially devastating threat. It has stopped us in our tracks and is forcing far more fundamental questions about who we are and what we will become, about what it means to believe and what our communities of faith mean in a time of extended lockdown and quarantine.

How we answer them will determine our direction in the future. If we are divested enough of our differences by the time fear no longer governs our approaches to one another, perhaps we can muster the humility that is alien to the religion of self-sufficiency. That will be essential if we wish to make deeper investments in the common humanity we're being forced to acknowledge.

A version of this story appeared in the April 3-16, 2020 print issue under the headline: The lockdown lesson: We need one another .

Editorial | Editorial: May the lesson be indelibly inscribed — we need one another

Second Sunday in Ordinary Time: The hour has come