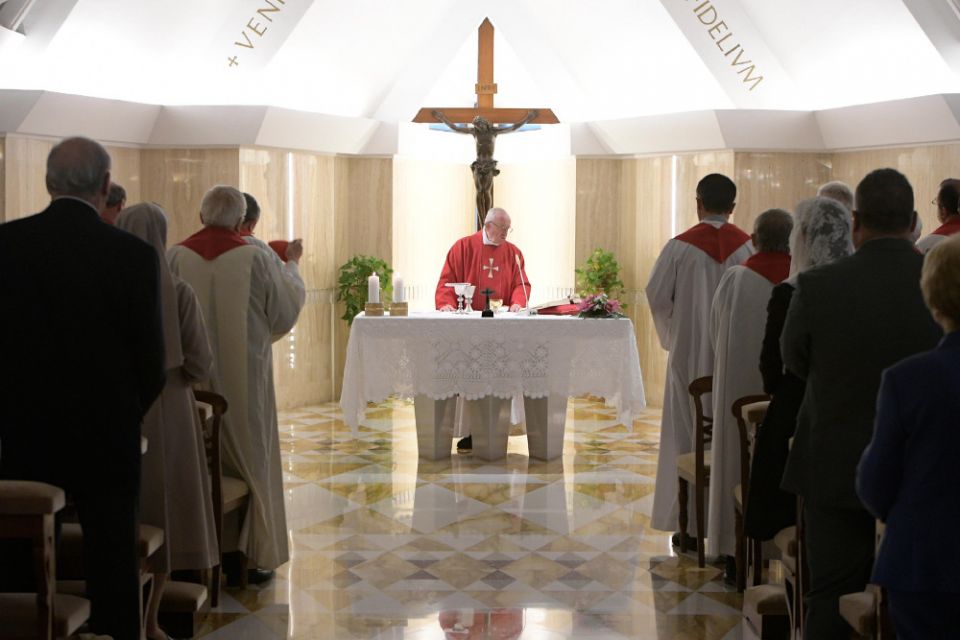 Pope Francis celebrates Mass in the chapel of the Domus Sanctae Marthae at the Vatican Sept. 14. (CNS/L'Osservatore Romano)

The most recent papal pronouncement giving more control to national bishops' conferences over the translation of liturgical texts had the quality of another of the jolts we've become accustomed to during the Francis papacy.

As his tenure advances, however, those moments increasingly feel less like jolts and more like a series of coherent adjustments, long overdue, for a community that had become top-heavy and overly dependent on rigid legalism in an attempt to maintain order.

Correcting that imbalance won't occur without struggle. The varied interests in the church who have already spent inordinate time and influence debating everything from the manner of translation to the material composition of eucharistic vessels are no doubt gearing up once again to join the fight. That may seem like a most malignant way to refer to liturgy, but the reality is that discussion of our public worship and changes to it can evoke deep emotions and the zero-sum passions of a political contest.

It is perhaps not persuasive to those who deeply oppose the direction of the Francis papacy, but intended or not, the sermon the pope gave in Medellín, Colombia, was a fitting companion piece to the liturgy announcement. Christianity, said Pope Francis, is not an exercise in how perfectly one follows laws and dogma. More important is the life of faith.

"Jesus teaches that being in relationship with God cannot be a cold attachment to norms and laws nor the observance of some outward actions that do not lead to a real change of life," he said.

The tensions, of course, are as old as the community. They are as evident today as they were when the original community's leaders argued over who could join and what they could eat. And aren't we fortunate that the visions they saw and the hearts they were developing answered: everyone and everything. All are blessed and good in God's sight.

Francis seems to be conveying two basic ideas in the document issued on his own initiative (motu proprio). Titled Magnum Principium, it diminishes the authority of the Vatican from "authorizing" all translations to a simple "review" of such documents. First, that mature leadership of national bishops' conferences can be trusted to maintain fidelity to the essence of liturgical worship while tailoring language to particular circumstances, and, second, that universality and unity are not synonymous with sameness.

By extension, one might add that it also acknowledges that a rigid adherence to some narrow conception of translation from Latin is not a measure of fidelity.

The phrase "liturgy wars," unfortunate as that might be, crept into the discussion because liturgy became the subject not only of heated debate but also of a kind of ecclesial subterfuge in recent years.

Read this next: 'Magnum Principium' is latest event in 'liturgy wars'

A lot is at stake, and that was evident from the moment the Second Vatican Council (1962-65) affirmed its first document, the groundbreaking "Constitution on the Sacred Liturgy," which led the era’s reform of church life.

Liturgy was no longer a static exercise of mumbled Latin, a language the vast majority of Catholics worldwide did not speak, in which individual devotion and docility were key elements. It became, instead, the act of worship that undergirded and fortified a community in service beyond the walls of the worship space.

Also inherent in that council document was a significant shift in ecclesiology, which then-Fr. Joseph Ratzinger described approvingly as the "decentralization of liturgical decision-making" and "the long-desired strengthening of episcopal power."

His enthusiasm for that change may have abated somewhat later as he became a cardinal and chief doctrine authority in the church and ultimately Pope Benedict XVI. But there was no mistaking the intent of the council document.

Pope John Paul II moved most aggressively to rein in the authority of national conferences, and there was no more telling example of the lengths he would go to in accomplishing that ambition than what he did to override English-speaking bishops, their liturgical experts, and especially the U.S. bishops.

The "reform of the reform" became inevitable when the Vatican, in 1997, decided to countermand decades of process and expert work and appointed a committee, whose members brought none of the required expertise to the table, to rework translations. As we reported that year, 11 men met in secret in the Vatican "to overhaul the American lectionary," or readings used in Mass. "Short-circuiting a six-year debate over 'inclusive language' by retaining many of the most controversial uses of masculine vocabulary, and revamping texts approved by the U.S. bishops, this group decided how the Bible will sound in the American church."

It was the ultimate exercise of centralized power. In the intervening years, all of the mechanisms that permitted collegiality and respected the work of experts in liturgy and translation were essentially dismantled. Over a quarter of a century, John Paul II had his bench in place — bishops who would not oppose the diminished role of national bodies — and the will of the Vatican on the particulars of translation for U.S. Catholics was in place.

So Francis' rollback of that authority is actually a realignment with the council's intent. It is, in political terms, a return to center, to moderation and to a trust of the community's local leaders. Whether the U.S. bishops will claim that trust — whether, indeed, they can regain the capability to robustly debate items without falling into ideologically driven discord — is to be seen. But Francis has restored their adulthood and given them again a latitude to discern that mature spiritual leaders should possess.

It is a Pauline gesture of sorts that acknowledges that not all cultures are the same, that not all believers need to take on the effects of an ancient, mostly European, expression of the faith. The Latin Mass, still a glorious and inspiring liturgy for some, need not be the norm for everyone, nor the benchmark against which all other worship forms are measured.

As was the case for Jesus and "for the first community," Francis said in Medellín, "it is of greatest importance that we who call ourselves disciples not cling to a certain style or to particular practices that cause us to be more like some Pharisees than like Jesus,” whose "freedom contrasts with the lack of freedom seen in the doctors of the law of that time, who were paralyzed by a rigorous interpretation and practice of that law."

On several fronts, then, Francis has asked us to walk away from that paralysis and to take new steps in freedom.

Editorial | Editorial: A realignment with the council's intent