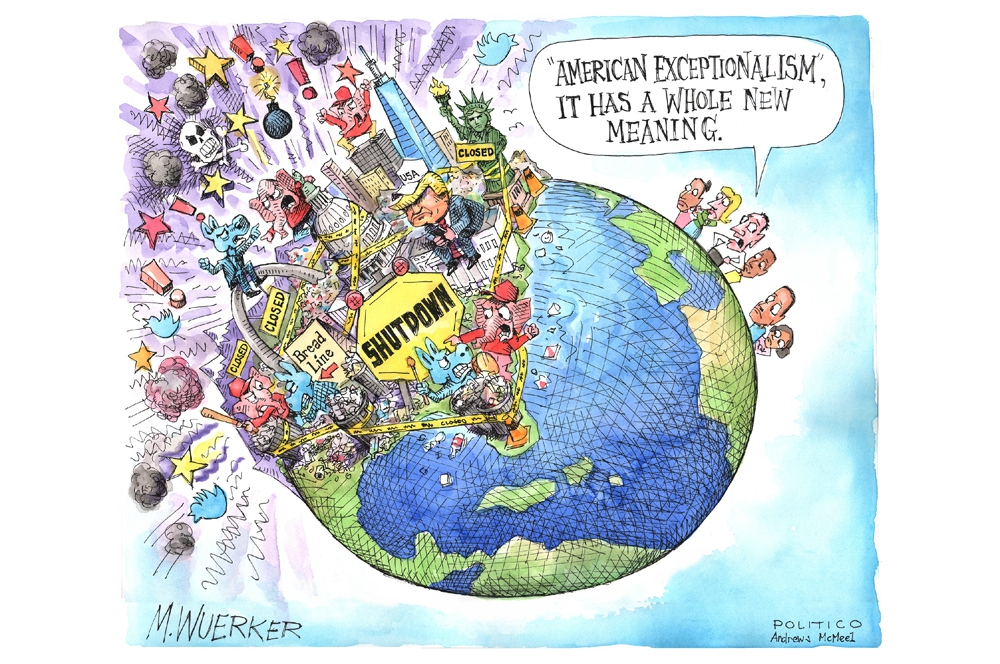 U.S. immigration policy is now reduced to a binary choice: money for a wall (that will never be built) or a government shutdown.

Riveting theater, with a first round to House Speaker Nancy Pelosi. Who will get round two? And what will it be like when President Donald Trump finally gives his State of the Union speech in the well of the House with cameras trained on Pelosi for her every reaction?

What legislative sleight of hand will she use to keep Trump, the president innocent of any governmental know-how, off balance?

We are becoming used to seeing significant issues reduced to a series of zero-sum episodes or presidential tweets that contain absurd assertions and simply incorrect information.

As put so well by Washington Post columnist Michael Gerson regarding the "crisis" at the border:

So far: President Trump has announced a crisis that isn't actually a crisis — requiring a wall that is not really a wall, funded by Mexican pesos that are really U.S. tax dollars — to keep out murderous migrants who are (as a whole) less violent than native-born Americans, leading to congressional negotiations that involve no actual negotiations, resulting in a government shutdown undertaken on the advice of radio personalities, defended in an Oval Office address that consisted of alarmism, prejudice, falsehood and other material caught in the P-trap of senior policy adviser Stephen Miller's mind.

Simply put, it is fraudulent, a made-up crisis. Call it government by shiny object, or by unmanageable impulse.

No sooner had the president lost that first round to Pelosi's superior understanding of both the law and public attitudes than Trump took to tweeting incendiary remarks Jan. 30 about his intelligence establishment. "The Intelligence people seem to be extremely passive and naive when it comes to the dangers of Iran. They are wrong!"

Intelligence officials the day before had briefed members of Congress on Iran, painting a far different picture of the country than that held by the president. In their assessment, Iran is in compliance with the 2015 nuclear accord and is not in the process of building a bomb.

Their report to Congress also contradicted Trump's assertions that the Islamic State in Syria and Iraq will be destroyed and that there is a good chance that North Korea will denuclearize.

Such claims by a president in almost any earlier era would have been breathtaking, enough on their own to bring the government to a near stop. But this is Trump, and once again the complexities of a situation — even those that point to international progress — will be buried beneath the clatter of a winner-loser scenario. Who is right, Trump or the intelligence community?

What matters, of course, is not the truth and certainly not the complexity of the matter.

The debate over the border has produced mountains of evidence that Trump's once-wished-for "beautiful wall" along the entire expanse of the U.S.-Mexico border is, first, an impossibility and, second, not wanted by a lot of officials and people who live in the towns and cities along the border.

As NCR Bertelsen intern Maria Benevento reported several months ago from El Paso, Texas, the people in this sister city to Ciudad Juárez, Mexico, don't recognize their home in the descriptions from afar.

El Paso Bishop Mark Seitz said that for those at a distance, the border can seem "a place where one reality ends and another begins. ... For us it's a place of passage, it's a place of encounter, it's a place you cross in order to join your family; it's not this place of armies confronting one another."

What actually is happening in Iraq and Syria, not to mention North Korea, is lost in the blizzard of assertions based on a preconceived narrative that has little to do with reality.

The question that lies beneath the growing burden of the alarmism, fear-mongering and sheer fiction dispensed by this administration is: Will the institutions that mold democracy and hold it together survive?

The fraudulence and deception reached a critical mass in the standoff that led to a government shutdown. Even some among his vaunted base began to see the truth of the matter. Trump had to be persuaded by some of his staunchest loyalists in the House and Senate to quit the face-off.

All of it, however, ignites a growing unease, even among Republicans, as the negative results of Trump's foreign policy, fiscal policy and trade policy begin to take hold at the moment the country's attention begins to turn to the 2020 elections and the unknowns yet to be revealed in the special prosecutor's report.

Al-Qaida, Islamic State have led to misperceptions of Muslims