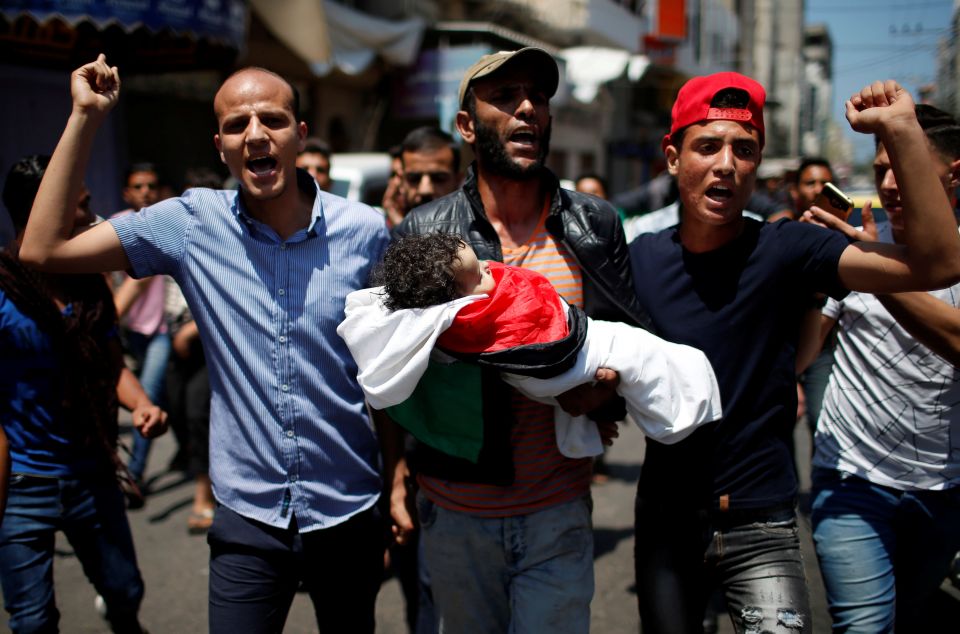 Mourners carry the body of 8-month-old Palestinian Laila al-Ghandour, who died after inhaling tear gas at the Israel-Gaza border during a May 15 protest against the U.S embassy move to Jerusalem. (CNS photo/Mohammed Salem, Reuters)

Even by the extremely low bar of the Trump administration's foreign policy, the deadly intertwining of the U.S. Embassy move to Jerusalem on May 14 and the U.S. reaction to the carnage unleashed by Israel in Gaza that killed 58 Palestinians and wounded 2,700 others, was an even newer low.

Both episodes brought into stark relief the Trump administration's approach regarding Israel/Palestine. Gone is any semblance of balance or impartiality. Instead, Trump has unconditionally and unapologetically completely aligned U.S. policy with the most rightwing Israeli government in that nation's history. The modest restraint that all previous U.S. administrations had exercised over Israel is now removed, thereby enabling the most aggressive tendencies of Israel against the Palestinians.

From the outset, the Jerusalem embassy move was ill-conceived and extremely premature. The issue of Jerusalem had always been a "final status issues" that the international community and the U.S. had defined as one whose outcome was to be negotiated between the two parties, Israelis and Palestinians, with the U.S. as a mediator. Instead, Trump has effectively preempted the outcome of the Jerusalem issue and made a mockery of U.S. mediation and impartiality by declaring solely for the Israeli side.

If Trump had been trying to shock the moribund peace process into life again, he could have conceivably used the issue of Jerusalem by presenting the U.S. decision to move the embassy as part of a larger future peace agreement. This could easily have been done by stating that the U.S. was moving its embassy to West Jerusalem, which it recognized as Israel's capital, while it foresaw East Jerusalem as the future capital of a Palestinian state.

A simple statement like this would have recognized the legitimate claims of both Israelis and Palestinians and helped defuse a situation already made extremely volatile by the month-long violence in Gaza and the 70th anniversary of both the creation of Israel and the resulting dispossession of the Palestinians.

The tragedy is that it did not have to be this way. Jerusalem today is effectively divided into Israeli West and Palestinian East with hardly any shared neighborhoods between them. As such, the city can realistically serve as two independent capitals without the complicated defining of borders that comes as the result of the proliferation of Israeli settlements. The one tricky aspect to Jerusalem is the one square kilometer of the Old City, which encompasses the holy sites of the three faiths, because of the emotional resonance it has for everyone involved.

Defying logic, reason and facts, the Trump team attempted to spin the embassy move as actually assisting the cause of peace, a proposal both ludicrous and insulting in its brazenness. "When there is peace in this region, we will look back upon this day and remember that the journey to peace started with a strong America recognizing the truth," Jared Kushner, Trump's son-in-law and top Middle East advisor, declared at the embassy's inauguration ceremony.

Trump's astonishing reasoning is that the embassy move means that he has "taken Jerusalem off the table," and therefore the two sides can now focus on resolving the other final status issues, such as borders and refugees. Any keen observer of the Mideast knows the truth is precisely the opposite. By only recognizing Israel's claim to Jerusalem, while ignoring the Palestinian claim to the city, Trump actually amplified the Jerusalem problem exponentially. The promised Kushner peace plan is not only now dead on arrival, but the Palestinians have now completely boycotted Trump administration officials and have declared the U.S. role as sole principal mediator between the two sides to be over.

Equally jarring as Kushner's statement at the inauguration ceremony was the contrast between the festive atmosphere at the event and the simultaneous dying of dozens of Palestinians in Gaza at the hands of Israeli snipers. The bloodbath in Gaza was blithely ignored by the Americans and Israelis at the event, while split television screens on all major TV networks showed the grotesque absurdity of it all.

Tens of thousands of Palestinians, furious at the embassy move, and frustrated with the prison-like conditions they lived in, demonstrated at the Israeli border fence with Gaza. Demonstrators know full well they cannot breach the fence or even cause a single Israeli casualty, but they put their lives at risk out of sheer hopelessness and desperation. Fear has gone the way of hope.

Predictably, yet still shamefully, the Trump administration dismissed the Gaza violence as "gruesome and unfortunate propaganda," even going so far as to blame Iran, the Palestinian militant group Hamas and even the Palestinians for their own deaths, adopting the Israeli government's nonsensical claim that the Palestinian demonstrators were shot to prevent them from "invading Israel." In one particularly revealing exchange, White House spokesperson Raj Shah was asked if Israel bore any burden whatsoever to rein in its response to the demonstrations, to which he responded they were not.

The actions of Hamas in taking advantage of Palestinian frustration and helplessness to encourage people to go to the border are condemnable, but to accuse Hamas for the Palestinian deaths when it is Israeli soldiers pulling the triggers that caused so much carnage is facile. The reason Palestinians demonstrated at the border is not because of Hamas. It is the result of 10 years of Israel's collective punishment of the civilian Palestinian population of Gaza to the point where Gaza is on the verge, according to the United Nations, of becoming "unlivable."

Arab leaders went through the motions of condemnation and anger at the bloodshed, with the moribund Arab League holding yet another emergency meeting to discuss the situation in Gaza. To describe the results of this meeting as minimal would be exaggerating. Arab condemnation is a valueless currency, counting for nothing.

The only meaningful criticism of Israeli actions came from Turkey, a non-Arab country, and the Europeans. Turkey called on the United Nations General Assembly to pass a resolution on Jerusalem, called for an independent commission to investigate the Palestinian deaths in Gaza and expelled the Israeli ambassador. The European response focused on Israel's use of excessive force, with French president Emmanuel Macron adding his condemnation of Israel's "heinous acts" in targeting Palestinian demonstrators.

The U.S. Embassy move to Jerusalem has caused a serious breach between the U.S. and Palestinians, which means any future Trump peace plan is already irrelevant. No Palestinian leader would be able to even faintly endorse it. The peace process is completely dead in the short term.

What has also become clear is that the Trump administration's policy towards the Palestinians is to crush their spirit with diplomatic defeats and aid cuts so that Palestinians will come to heel and negotiate on Israeli terms. This neo-colonialist policy fits perfectly with the current Israeli government that sees Palestinians not as human beings with inherent rights, but as an enemy to be subjugated.

However, the more than two million Palestinians crammed into Gaza will not disappear or accept a fate of permanent subjugation. Neither will the Palestinians in the West Bank quietly accept being hemmed in by walls and barbed wire due to the creeping and relentless expropriation of their land by Israeli settlements.

The current U.S. and Israeli administration's attempts to force a one-sided solution onto the Palestinians will never succeed. Meanwhile, the pot is boiling, and when it erupts, all parties will suffer.