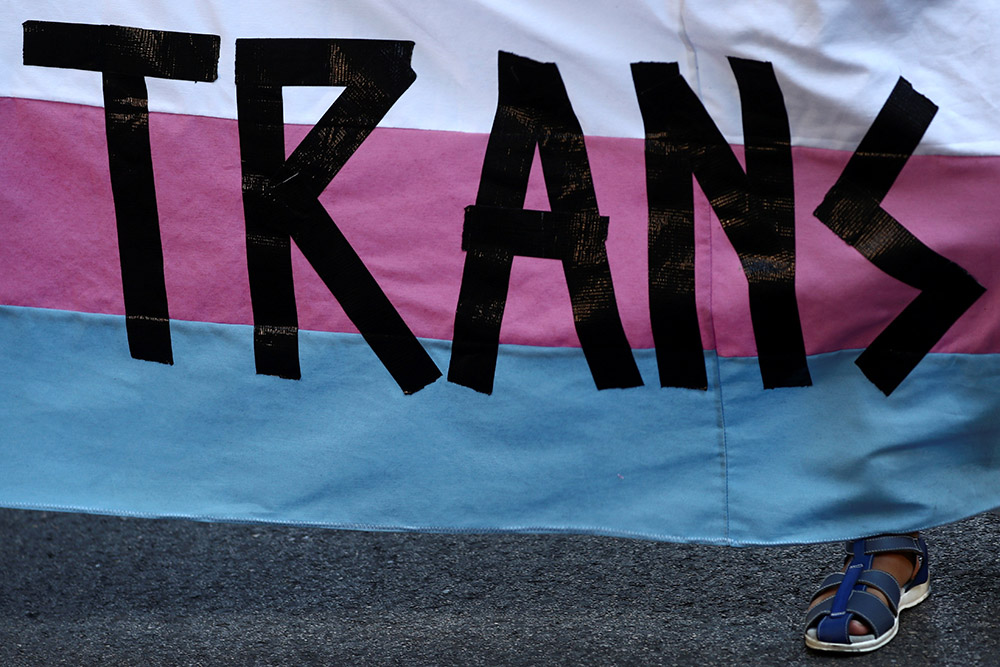 Pete, 9, a transgender minor, holds a banner as he takes part in a protest to mark LGBT Pride Day in Madrid, June 28. (CNS/Reuters/Sergio Perez)

Last month, two more U.S. bishops issued statements that dismissed the reality of transgender persons and their lived experiences. The first, Bishop Michael Burbidge of Arlington, Virginia, published a document titled "A Catechesis on the Human Person and Gender Ideology." The second, Bishop William Joensen of Des Moines, Iowa, used the occasion of the Solemnity of the Assumption of Mary to digress into transphobic diatribe in a diocesan blog post.

In both cases, these bishops — whose intentions I believe are sincere, but whose knowledge, expertise and pastoral competence in this area are sorely lacking — resort to the tired straw man of "gender ideology" as the catchall for everything that frightens or confuses them about transgender persons or those who are otherwise gender nonconforming.

However, as I have explained in greater detail previously, there are many troubling aspects with use of the phrase "gender ideology" in various ecclesiastical circles. First among these concerns is the term's ambiguity. There is no universally agreed upon meaning for this derogatory expression, which is convenient for those who seek an ideological bogeyman or frightening specter to haunt congregations into greater transphobia.

Both Burbidge and Joensen claim to ground their transphobia in the "truth" of church teaching and, in ways confused at best and disingenuous at worst, make reference to selective medical terminology or opinions. What is striking about this alleged recourse to truth is the stark absence of facts or evidence invoked to support their concerns about the experiences and identities of actual human beings in the world.

The way that these bishops talk about truth is with a Platonic abstractionism that does not bother to take into consideration the multiplicity of experiences of actual people living in the world. Sadly, we have seen this disconnection between some church leaders' desire for truth and truth that is actually grounded in fact play out over the course of church history before.

I think of the way in which the church has viewed and its leaders have treated Indigenous populations, especially during the course of European colonization. I think of the long history of misogyny and subjugation of women in the church and within so-called Christian societies. I think of the church's longstanding complicity in chattel slavery and the transatlantic slave trade. I think of the treatment of non-Christian communities such as during the medieval crusades, the widespread history of antisemitism or in the subtler discrimination of non-Catholic Christians before the Second Vatican Council.

What we see here is a pattern of dehumanization at work, one that may be experienced as motivated by the good and pastoral intentions of these bishops and like-minded others, but that has devastating and traumatic consequences in practice.

There is an ironical valance to all of this: These bishops claim to be offering observations and pastoral guidance in response to what they perceive as a "serious challenge" to society today, but in fact what is actually dangerous and harmful is their reinforcement of transphobic stigmas, misunderstandings and misinterpretations of developing medical and psychological data, and claims that all of their actions are supported by Catholic teaching.

The real problem is not the actual existence of transgender persons — or anybody who does not conform to the binary, complementarian worldview these prelates wished was singularly true. The real problem is church leaders who exercise a kind of intellectual and epistemological hubris that leads them to conclude that their experience of being in the world is an authentic measure of everybody's experience of being in the world.

Pope Francis, who has also used the phrase "gender ideology" on occasion and in varying contexts, has also acknowledged that not even the pope has all the answers or is without the capacity for making mistakes.

In his 2013 apostolic exhortation Evangelii Gaudium, "The Joy of the Gospel," he wrote: "It is not the task of the Pope to offer a detailed and complete analysis of contemporary reality, but I do exhort all the communities to an 'ever watchful scrutiny of the signs of the times.' This is in fact a grave responsibility, since certain present realities, unless effectively dealt with, are capable of setting off processes of dehumanization which would then be hard to reverse."

Notice the imperative here: Francis acknowledges that the church community must examine the signs of the times, which ought to lead to our responding to and preventing "processes of dehumanization which would then be hard to reverse." 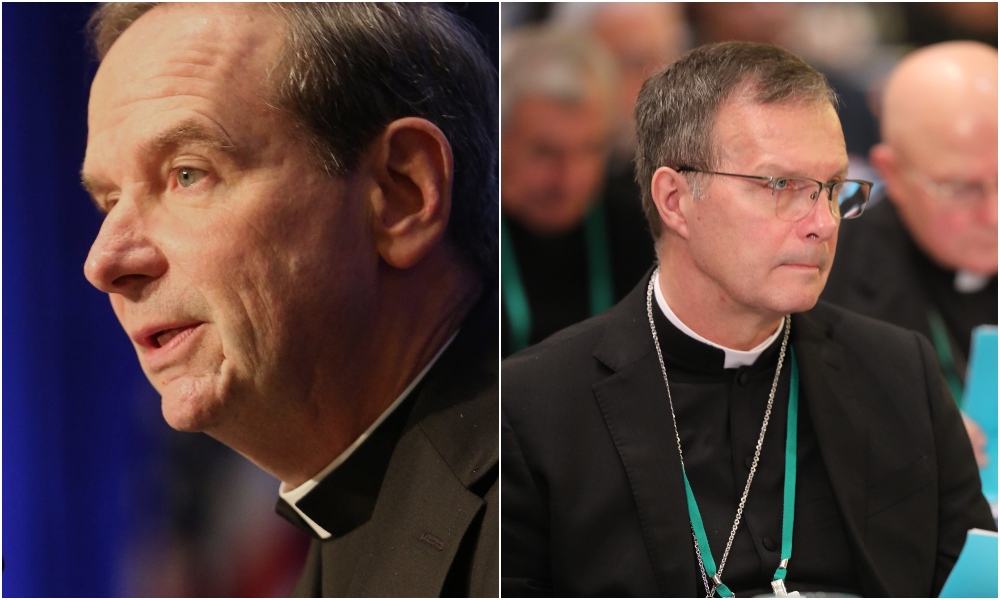 Transphobia is a form of dehumanization, a kind of destructive and dangerous discrimination that has no place on the lips of a pastoral minister or in the documents of a church leader.

And yet, here we are again with bishops setting a precedent of discrimination rooted in an unfounded claim to truth without facts. When I talk about facts, I mean church leaders need to do a better job listening, learning and discerning what it is they are claiming to talk about.

What is starkly missing from these two statements and similar transphobic remarks by church leaders in recent years is any encounter with transgender persons themselves.

As I explain in my 2019 book Catholicity and Emerging Personhood: A Contemporary Theological Anthropology, there are resources in the Catholic theological and moral tradition that offer cisgender persons better footing in seeking to understand and learn from the realities and experiences of transgender persons. Far from being antithetical to the Catholic tradition, the complexity of human gender and sexual identity is a gift from God, which cannot be understood exhaustively through simple black-and-white, binary, stereotypical categories and ways of thinking.

The mystery of human personhood is complex and requires a tremendous degree of humility in approaching any claim to description or understanding, especially when attempting to make universal claims. And when approaching sensitive questions about identity and existence, we would do well to heed the wisdom of the medieval Franciscan theologian Blessed John Duns Scotus, who argued convincingly of the primacy of "intuitive knowledge" over "abstractive knowledge."

Put simply, intuitive knowledge is a kind of immediate knowledge, a familiar or experiential knowledge, which is known at the deepest level because it arises from direct experience.

At best, the claims of those who dismiss the reality of transgender persons contributes to the dehumanization of God's trans children because they are relying on an outmoded form of abstractive knowledge that may or may not reflect reality, since abstractive knowledge can also apply to things that merely exist theoretically.

By contrast, the intuitive knowledge of transgender persons can access actual experiential reality that is foreclosed to those whose being-in-the-world is different.

It is not just insulting to encourage cisgender people to reject the names and preferred pronouns of transgender people, as Burbidge does so flagrantly in his "catechesis," it is sinful, harmful and dehumanizing. I suppose these bishops wouldn't mind it if we all started calling them by feminine pronouns or some title or name other than "bishop" with their surname or some other descriptor not of their choosing. I suppose they wouldn't find it disrespectful or offensive in the least, right?

While I don't expect many of the American bishops to understand easily something that does not align comfortably with their perception of the world, shaped as it is by their own experience of meaning-making, I would hope that when it comes to something as simple as addressing other human beings with basic respect, they would listen to Jesus's own exhortation to live the Golden Rule as Matthew 7:12 summarizes: "Do to others whatever you would have them do to you."

That is what Christ asks of us at the start and the rest, if we are intellectually humble and open to the Holy Spirit's guidance as we learn more about the complexity of human existence, will come with time.