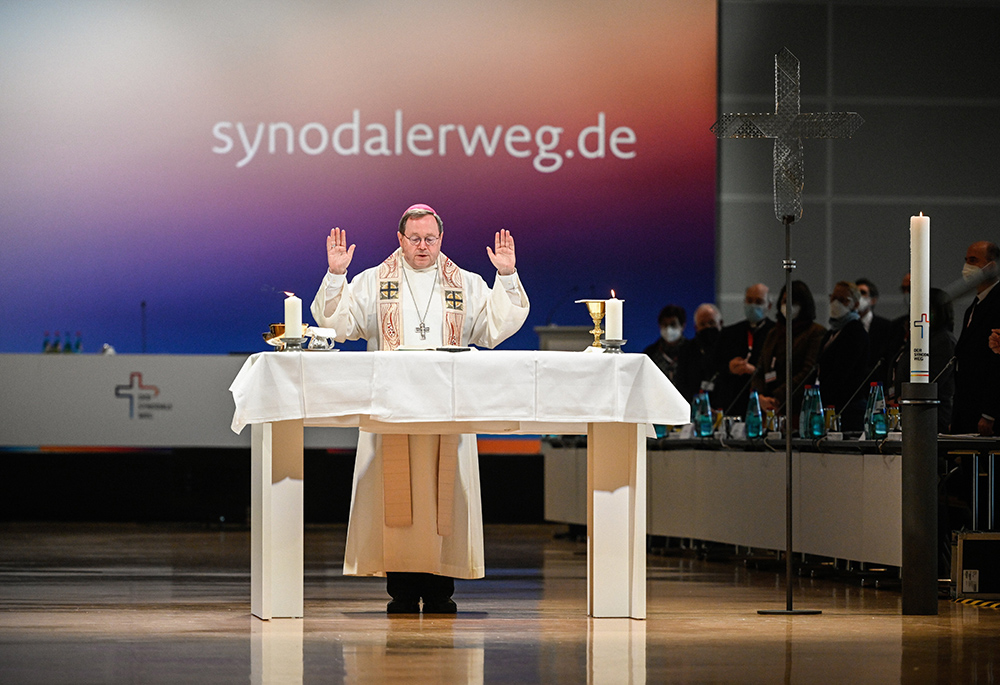 Last week, 74 bishops signed a letter to the German bishops expressing concern about that country's "Synodal Path," which voted on a series of reforms in February. The letter warns the German synodal consultations hold the "potential for schism" and identifies seven specific criticisms, such as the charge the German process relied more on "sociological analysis and contemporary political, and gender, ideologies."

At the meetings of German Catholics earlier this year, the synodal body publicly voted for a document calling for women deacons and for involving laypeople in the selection of bishops, as well as calling for a relaxation of the rule of celibacy for the clergy and for some kind of blessing of same-sex unions. Previously, the bishops of Scandinavia voiced concerns about "the direction, the methodology and the substance" of the German consultations as did the president of the Polish bishops' conference.

Last year, when some of the preparatory documents for the German meetings were released, Denver Archbishop Samuel Aquila issued a 15-page criticism. He was one of the signatories of the current letter as well. And most of the other signatories are not surprising: Cardinal Raymond Burke; Cardinal Francis Arinze; Archbishop Salvatore Cordileone of San Francisco; two retired archbishops, Charles Chaput and Joseph Kurtz; and various other prelates. Several of the names coincided with the lists of bishops who voiced support for disgraced former nuncio Archbishop Carlo Maria Viganò when he called on Pope Francis to resign. That was a much graver issue than this letter to the German bishops.

One name on the list of signatories jumped out at me: Bishop Michael Warfel of Great Falls-Billings, Montana, who was at the meeting of bishops and theologians in Chicago last month, and whom I always think of as a pastor first and foremost, without any special ideological baggage.

I wrote to Warfel and asked why he signed it. "As I've read about the Synodal Path and the Fundamental document produced from it, concerns surfaced," he replied in an email. "From what I have read, there is an indication of a desire to change Church discipline and doctrine. While there are ample disciplines that may be adjusted, e.g., mandatory celibacy, doctrine is a different matter, especially when the delegates of the Synodal Path indicate irreformable doctrine."

Warfel said he was worried about the German process sowing confusion. "There is one statement in particular that caught my attention and caused a bit of heartache: '…there is no one truth of the religious, moral and political world…' This comes from the Fundamental Text document. To me, it sounds a lot like, 'Well, that may be your truth, but it is not my truth.' This can easily lead into relativism." 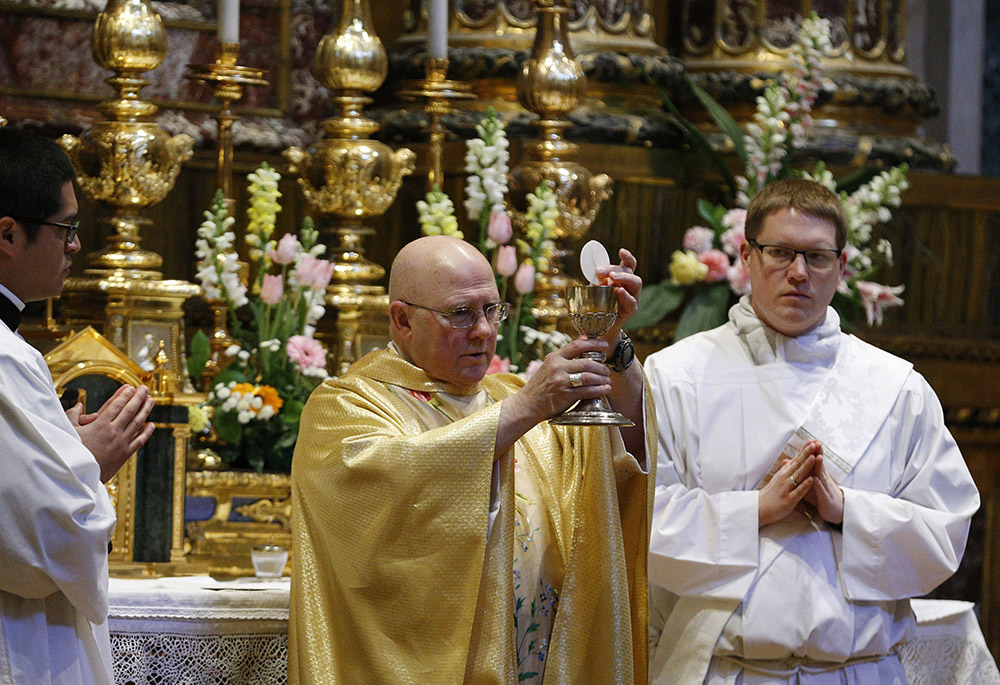 Bishop Michael Warfel of the Diocese of Great Falls-Billings, Montana, holds the Eucharist as bishops from Washington, Oregon, Idaho, Montana and Alaska concelebrate Mass at the Basilica of St. Mary Major Feb. 6, 2020, in Rome. The bishops were making their "ad limina" visits to report on the status of their dioceses to Pope Francis and Vatican officials. (CNS/Paul Haring)

Asked if sending such a public rebuke really fit the definition of synodality, Warfel replied, "I actually view the open letter more as frank dialogue. Pope Francis has emphasized the need of dialogue." He added, "I think a confidential or private letter would not garner much attention from the German bishops. I also do not believe a confidential of private letter would remain so for very long. As [former Vatican nuncio] Archbishop [Pietro] Sambi said to me long ago, before I was appointed to Great Falls-Billings and had heard about the appointment before he called me, 'It's hard to keep a secret in the Church.' "

Others discerned a pattern of opposition to this pope in the letter sent to the German bishops. "This letter is in keeping with the tactics of previous letters issued during this pontificate — the 'secret' letter during the first synod on the family, the infamous dubia and the rest," said David Gibson, director of the Center on Church and Culture at Fordham University. "The very apparent subtext is that the pope is not doing his job 'so we will do it for him.' "

"This letter is rather astonishing when you consider what would happen if a group of bishops from Germany or Italy or elsewhere wrote to the American church chastising us for our many faults, some of which could be characterized as nearly schismatic," Gibson told me by email. "The opposition to Pope Francis, to Vatican II, to the pope's key teachings in Amoris Laetitia and Laudato Si', the use of great wealth and influence to foment divisions in the Church, the subsidizing of the old Latin Mass as a source of division — all these things are grave problems for the unity of the church."

I suppose I come down somewhere in the middle, less sanguine than Warfel and less suspicious than Gibson. The concern about "confusion" has been voiced before and at times in disingenuous ways. But the concern is not necessarily bogus. There are pastors like Warfel who need to minister to members of their flock who are perplexed when, for example, Munich-Freising Cardinal Reinhard Marx suggests the catechism's treatment of homosexuality could be altered and improved. Pastors are not wrong to worry about keeping the balance between constancy and relevance in how the teaching of the church is presented.

The confusion, however, is multilayered and critics of the development of doctrine do not get a heckler's veto. Catechisms are attempts to explain the faith in a particular time and place. Of course, they can change. What is more, the current catechism's treatment of homosexuality is manifestly inadequate. The language about homosexuality being "intrinsically distorted" makes a kind of sense in terms of Thomism's excessively teleological anthropology, but most Catholics are no longer schooled in Thomistic anthropology. Pastorally, the language is a disaster. I am going to go out on a limb here and suggest that if Cordileone really listened to what was said in the synodal process in his own city, he might not have needed to look across the ocean to find Catholics who perceive the limitations of the current catechetical language on the subject of homosexuality.

At Vatican II, the prominent role played by German-speaking theologians and priests such as Hans Küng, Karl Rahner and Joseph Ratzinger led to the saying "the Rhine flows into the Tiber." This time, conservative prelates are saying, "No, the Rhine flows into the North Sea." I wish the letter had been sent privately, or that some genuine effort to speak with the German bishops had been mounted, but it is less obnoxious than the dubia, for example.

Still, the core problem is different. The church desperately needs to have a private, internal or "family" conversation on controversial issues, but the times in which we live do not permit private conversations. If synodality is going to work, we need to worry less about how things are said and focus more on the content of what is being said. There are large questions facing the church, and, as I have noted before, Americans are almost uniquely ill-suited culturally for the kind of forbearance and patience synodality demands.

The German Synodal Path is part of a universal process. The German bishops have made clear that they understand certain doctrinal matters can only be developed by the universal church. Last week's kerfuffle about this letter to the German bishops was instructive about the process and its limits, not about how the synodal process will end. We can't let a series of tempests in teapots derail what may yet prove to be the most consequential implementation of Vatican's II ecclesiological vision in our lifetime.

This story appears in the Synod on Synodality feature series. View the full series.
A version of this story appeared in the April 29-May 12, 2022 print issue under the headline: Frustration with German Synodal Path should not derail path of synodality.