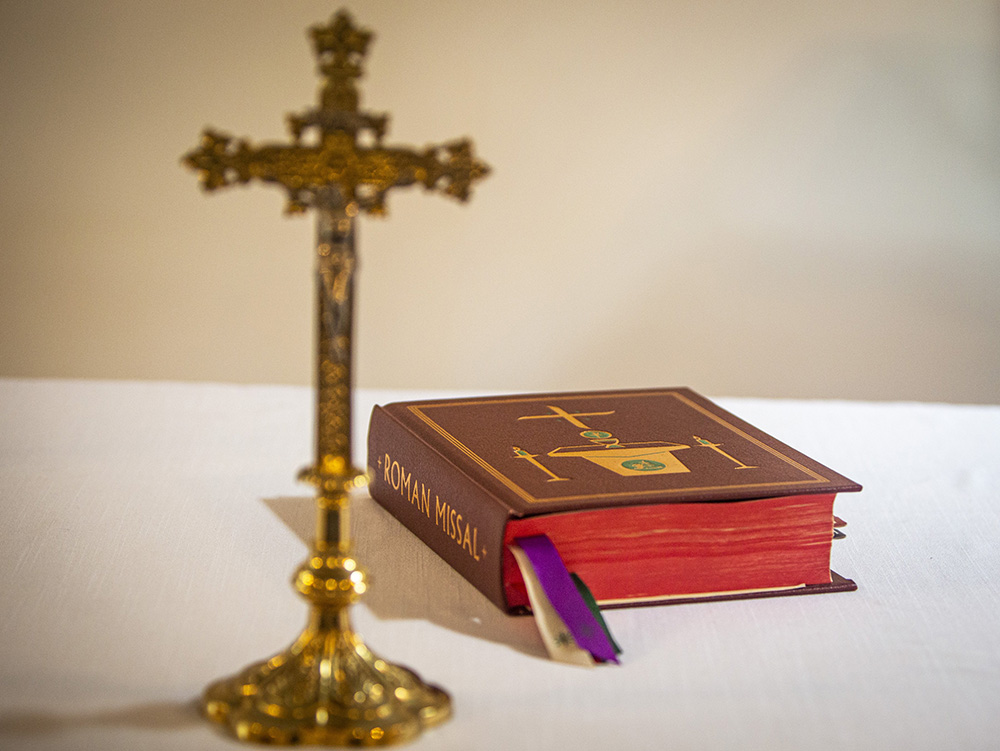 When I was a young girl attending Mass with my family at St. Mary's Catholic Church in the 1960s and '70s, I don't ever remember wanting to be an altar server.

So the fact that I ended up becoming one, at the age of 63, surprises me a little.

Surely, I must have watched from those childhood pews as some of my five brothers served as altar boys and noticed that no girls did. But to the best of my recollection, I didn't feel any envy or a desire to join them.

Looking back from my adult vantage point, I assume my lack of interest in being up there on the altar was due to some ingrained social conditioning that I didn't even recognize. I suppose I blindly accepted that girls just didn't do that. The only time I ever saw my mother step on the altar at St. Mary's was to clean it or to arrange the bouquets of garden flowers that she faithfully provided most weeks. Girls and women simply didn't participate in the Mass as cantors, lectors or, God forbid, altar servers back then. It never crossed my mind to ask, Why not?

I was an adult by the time I saw the first girls serving in that role. It wasn't until the mid-1990s that my own South Dakota diocese allowed — if not necessarily encouraged — girls to serve. I recall that the then-bishop was less than thrilled with the change, but I also remember that it made me very happy.

Early last year, when Pope Francis finally made it official that individual bishops can no longer ban women from serving as altar servers, I was surprised to learn that it wasn't already church law. Once again, I was reminded that change is glacial in the global church and that my hopes and prayers for a female diaconate and women's ordination will be answered in God's time, not mine.

I'm the mother of three sons who all did short stints as altar servers, but only reluctantly and only because I insisted on it. That lasted through their adolescence. My only daughter never showed any interest in the job, either.

Today, my four adult children are part of the exodus of younger people from the Catholic Church. None of them is practicing the faith. Nationally, less than half of all Americans are members of any church, according to a 2020 Gallup poll, down from nearly 70% for many previous decades. Here in western South Dakota, where I've lived for more than 30 years, the number of Catholics who are registered as parish members has dropped precipitously from more than 35,000 to about 20,000 during that time, according to the Official Catholic Directory.

All of that, of course, means fewer and fewer youth are in the pews. Today, my husband and I belong to a small, Jesuit-led parish that serves a large Native American population, but there are not many children and teens in those pews, either. My church struggles to fill altar server slots at its three weekend Masses, often relying on one senior citizen, Bob, who makes it his ministry to be there to serve at all three Masses.

Sitting in Mass one day, I realized that perhaps I should help Bob out. Years ago, I wanted my children to serve Mass, but maybe it was me, not them, whom God was calling to that particular ministry. Was this the quiet voice of God speaking to me? Was it a genuine desire or a sense of duty to serve my parish? Or was it just my guilt over Bob serving three Masses every weekend? Did it matter?

So, I ignored my innate dislike of being on stage and my fear of all types of public performance, and signed up for altar server training one Saturday morning. This turned out to be about an hour spent with a deacon and three or four reluctant kids who clearly were there only because their own mothers had, like me 30 years ago, insisted they become altar servers.

Mostly, I learned through on-the-job training with Bob at my side. Now, I am a regular altar server, often solo, at the Saturday evening Mass in my parish. When I carry the cross in the procession to the altar, or hold the prayer book for the priest, or pour water over Jesuit Fr. Ed Witt's hands as he prepares for the consecration, I've learned to disappear into those acts of service.

And I have given myself a front-row seat to the Mass. By reducing the physical distance between me and the action on the altar, I have, much to my surprise, been brought nearer to God in other ways as well. I did not expect that. As I bring Communion vessels to the deacon to prepare the altar for holy Eucharist and clear the chalice at the end of that meal, I am reminded to see my own meal preparations and kitchen duties as holy work, too. My new role in the celebration of the Mass provides me not only with a fresh perspective on the rituals of the Mass, but a new context for the rituals of daily life, as well.

While I am saddened by the lack of younger altar servers to fill this necessary role in my parish, I'm grateful for the gifts it has given me at this late date. Maybe performing this task has brought me closer to God simply because I'm being of service to my parish community. But I suspect it is more mystical than that. Maybe being in closer proximity to the sacred, something as ineffable as the consecration of the holy Eucharist, strengthens me in ways I cannot comprehend.

Like my faith, I accept that it's a mystery I will never fully understand. What I do know is that now when I embrace this mystery weekly, wearing the white robe and colorful belt of an altar server, I enter into the mystery in a new and wonderful way.