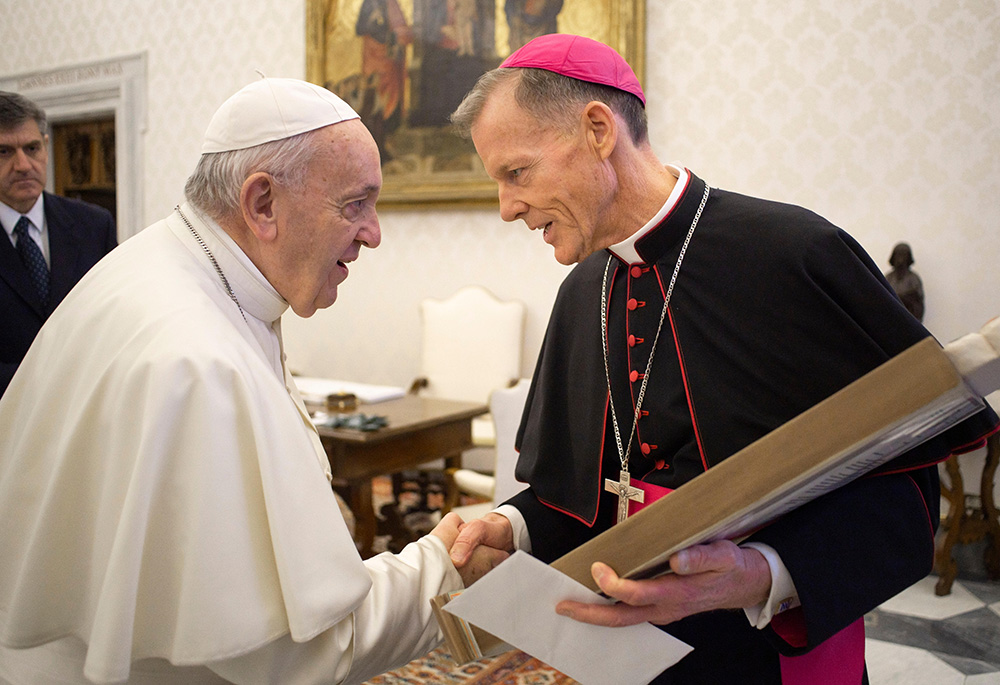 Pope Francis greets Archbishop John Wester of Santa Fe, New Mexico, during an audience with U.S. bishops making their "ad limina" visits to the Vatican Feb. 10, 2020, to report on the status of their dioceses. (CNS/Vatican Media)

It's all very ironic.

It's very difficult to talk about peace in the United States without starting a fight. There's at least one in every crowd who hail the strongman need for keepers of the peace who are willing to fight in order to keep it.

Those types were there at the beginning. They were the ones who were in favor of suppressing Native Americans by moving them off their own land now that we were here and declared that land ours. Then, astonishingly, called themselves "peacekeepers" when Indigenous people fought back.

And they were still here 350 years later when we dropped two planet-splitting bombs on Hiroshima and Nagasaki — despite the fact that the end of the war was already in sight — in order to see which bomb could do the most damage. In case we needed to use it again … to keep the peace, of course.

It all comes down to a view of the world that teaches "take what you want and threaten what you must" to "keep the peace." Then everyone will all be happy — as the beatitude says.

Unless, of course, being peaceful is not about squashing disagreement and obliterating whomever stands in our way. Unless it's about not fighting, or destroying life and traditions and whole swaths of people who are simply different than we are.

The problem is that the Jesus who died on a cross and would not fight to descend it leaves us looking for ways to keep the peace without suppressing and destroying the rest of society to get it.

Having said that, the church has never been all that good in teaching this beatitude. In fact, the church has a history of getting to "peace" itself through slaughter and suppression and enslavement and all manner of other things we refuse to remember as an institution. Like the Crusades. And the Inquisition of the Jews. And the persecution of Christians who were committed to a different version of Christianity. And, oh yes, like the battles fought to decide which candidate would become pope in the Middle Ages.

So, here we are, never actually forgiven our obligations to peacemaking but never really wholeheartedly committed to it either. Instead, the unarguable reasons for not doing it were discretely instilled over the centuries. As the weapons got bigger and bigger and the armory more and more lethal, we have all managed to practice more dismay than moral determination. "Yes, but," we wail, "what can one person do?" Or, "after all, we have to defend ourselves." Or, "they started it."

The counterarguments are all true, yes, but groundless.

Yes, we have the right to defend ourselves but surely not with devices capable of killing every child in its path for 20 miles around.

And yes, they started it but haven't we really been fueling it with our own taxpayers' money for over 75 years while those same children have grown up without three meals a day, or couldn't afford college educations, or didn't have medical insurance, or lived in unheated walk-up rooms in some slum-landlord's moneymaking hole?

Isn't all of that violence, too? Aren't we required to address that?

Shouldn't we be wondering how it is that we go on arming ourselves to deliver death to unseen enemies while our society is dying in other ways at our own hands as a result?

And now our so-called representatives and senators tell us that those social things are too expensive for them to allow while they have pumped the military budget up and up, over and over, for all the years of our lives?

Yet, dark as Catholic/Christian history may be, it's possible that we may be living at a moment when the Catholic world begins to teach the difference between fighting and solving human problems through less barbarian means.

First and foremost, for instance, Santa Fe Archbishop John Wester — the diocese that is at the center of nuclear development — has written a pastoral letter "Living in the Light of Christ's Peace." Most of all, it is a letter that does not call for deterrence, as has become common. Instead, this one calls us to work for the abolition of all nuclear weapons. 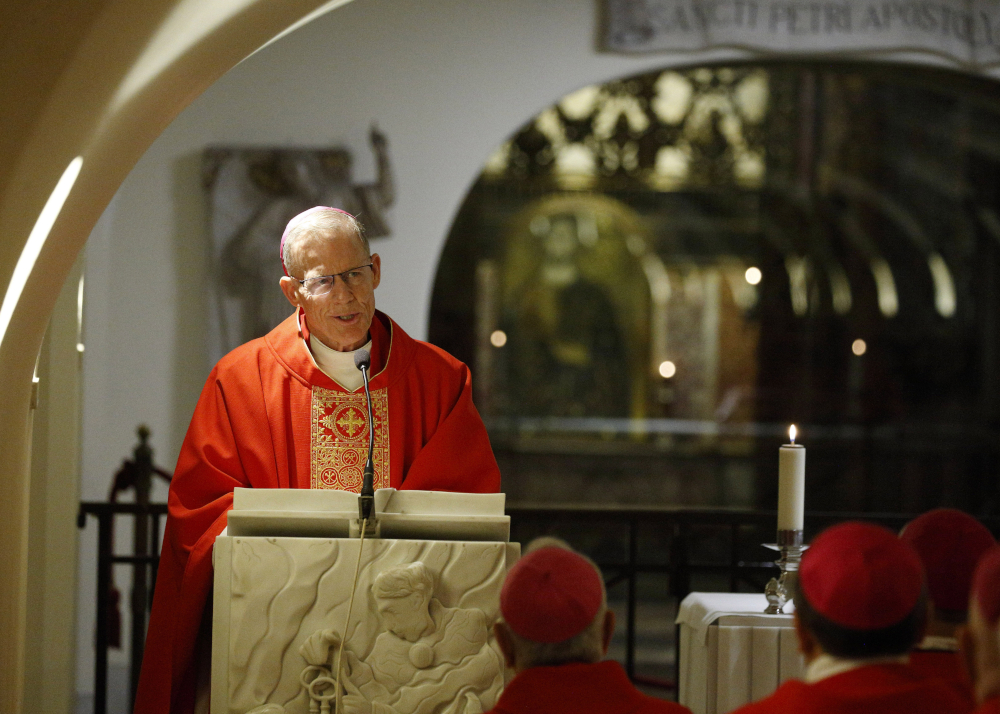 This letter is a strong and holy one: It calls for diocesan recommitment to the nuclear issues in very concrete ways.

First, he calls for parishes to hold public conversations to determine the actual public steps that can be taken to open the nuclear conversation across the country again.

Wester calls us to press for The Treaty on the Prohibition of Nuclear Weapons. It has been ratified by 86 countries so far but not one of the nine nuclear powers — the U.S., China, Russia, France, the United Kingdom, India, Pakistan, Israel or North Korea — have signed it.

Obviously, we have work to do.

He reminds us that we are, ironically, destroying ourselves and our country in the name of defense.

The archbishop's letter is a humane, holy and understandable approach to a topic that has often unleashed passions so deep they were actually ineffective everywhere.

At the same time, this letter, I admit, strikes me in a very tender place. Like Wester, I went to Hiroshima, too. I visited the museum, too. I saw the clothes that had been radiated into pieces of brick wall as the person who had been wearing them literally disappeared into the ether. Then I followed the two-part diorama that shows on one side of it a model of the bustling and developed city of Hiroshima until — on the other side of the divider— there was nothing left but one teetering tower and a hunk of brick here and there. I looked at it and blinked. In seconds, Model A had become Model B. And behind it, in simple frames on the wall, were two letters from President Harry Truman commanding the U.S. Air Force to refrain entirely from bombing five Japanese cities — Kyoto, Yokohama, Kokura, Hiroshima and Nagasaki — so we could find out which of the two new bombs would do the most damage.

I am an American! Standing in that crowd in the Hiroshima Peace Memorial Museum, the embarrassment of it consumed me. I could feel the tears pour down my face before I could attempt to dry my eyes. I turned my back away from the crowds pushing behind me to continue the tour.

And then, out of nowhere it seemed, I felt someone put their arms around my waist and say softly in my ear, "I'm so sorry. We cry, too, sometimes, but we don't want you to cry."

It was my young teenage Japanese guide with a searing lesson in forgiveness and universal care at the same time. 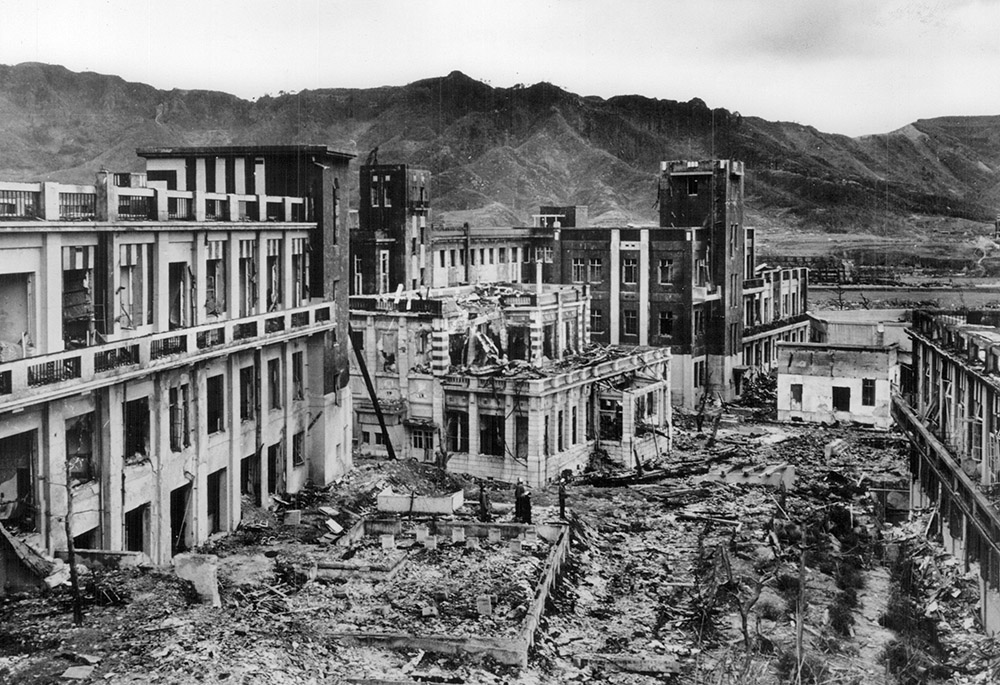 From where I stand, it is clear that violence starts at the top for us. Under the aegis of "defense," we have come to exalt the kind of violence that undermines every layer of our entire society. It corrupts our children, it unmoors our relationships, it blinds us to the poison in our national heart while we get less and less happy every day.

We have been called by strong bishops over the years, all of whom understood this infection in the body politic. Bishops Thomas Gumbleton, Raymond Hunthausen, Leroy Matthiesen, and 75 other bishops who led the American episcopacy into the first peace pastoral in the United States precede a bishop who is waking us up again to what the Beatitudes are really all about.

The difference is that Wester is alone and standing in what came to be the center of the "American Nuclear Soul" in Santa Fe calling us again to examine our American consciences. As Pope Francis said at the Peace Memorial in Hiroshima on Nov. 24, 2019, "The use of atomic energy for purposes of war is immoral, just as the possessing of nuclear weapons is immoral. … How can we speak of peace even as we build terrifying new weapons of war?"

Who says that no one can do anything important alone? We have a bishop now who by standing up alone may — we can hope — wake this country up again to the place of conscience in the life of the Beatitudes.

Provided, of course, that we are willing to stand there — alone — as well.

Read this next: 'Purity of heart' beatitude is at the core of what we need in this country