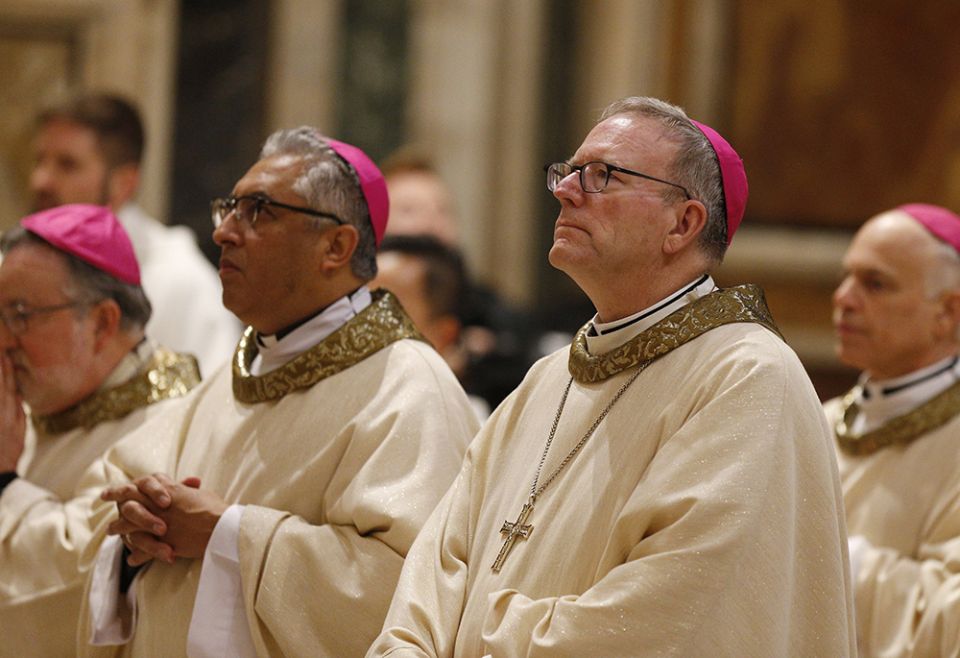 Auxiliary Bishop Robert Barron of Los Angeles, right, and other U.S. bishops concelebrate Mass at the Basilica of St. Mary Major while making their "ad limina" visits in Rome in this Jan. 30, 2020, file photo. Bishop Barron has been appointed by Pope Francis as the new bishop of Winona-Rochester, Minnesota. (CNS/Paul Haring)

Last week, my NCR colleague Brian Fraga and freelancer Jenn Morson published an in-depth report about a series of recent resignations at Word on Fire, the Catholic multimedia platform created by Bishop Robert Barron. In a strange coincidence, the next day Pope Francis appointed Barron, formerly an auxiliary bishop for Los Angeles, as the Bishop of Winona-Rochester, Minnesota.

It is always difficult to know what is really going on inside any organization, but when you witness a series of resignations, that is usually not a good sign. I need not repeat the various charges and countercharges that surrounded a former employee, Joseph Gloor, a bodybuilder who became the organization's highest paid employee. They are all in my colleagues' reporting. To be clear: Gloor denies the allegations made against him, which involve relationships outside the Word on Fire workplace.

You can't say I didn't warn you! Back in 2018, I called attention to the fact that Barron was not so much engaging the culture as becoming complicit with it, most obviously in the crass commercialization of Word on Fire. Every weekday, I get an email which is usually a solicitation of some sort: If I buy this book or that video, I shall take a giant step towards salvation. The whole approach, though not always the content, reeks of Black Friday, not Good Friday.

And, in that same article I mentioned the bishop's apparent penchant for hiring bodybuilders. (One of the videos to which I linked appears to have been scrubbed from the Word on Fire website along with many references to Gloor.) Whatever you think of the bodybuilding lifestyle, it is not centered around the cultivation of interiority, so it seemed an odd fit for a bishop's brand. Like Barron's strange affinity for psychologist Jordan Peterson, one wonders if it evidences a concern with modern understandings of masculinity, but almost as a parody. Barron is a man of sophistication so I could never understand what he found compelling about Peterson. I confess I have never been able to make it through one of Peterson's talks, but some of his comments about masculinity — and other issues — are horrifying or weird or both.

What is most worrisome to me about Fraga's and Morson's reporting is the organizational response to the allegations, including Barron's response. Barron seemed more concerned about the well-being of the accused than of those who were telling Barron they had been harmed by Gloor. Fraga and Morson write:

Barron also struck a sympathetic tone for Gloor, telling those on the companywide call that the investigation had also been "a difficult period" for Gloor, who Barron said "loved Word on Fire with his whole heart and soul." Barron added that protecting Word on Fire "was paramount in his mind."

What I detect here is the kind of response we found in earlier times during the clergy sexual abuse crisis. Whenever you read the transcripts of depositions by bishops who, back in the 1960s, '70s and sometimes later, were told of an allegation of sex abuse against one of their priests, they almost always responded with some variation of "Poor Father."

It is not that we should avoid sympathy for all people in highly conflictual situations, still less that we should be stingy in extending God's mercy. It is that the first instinct apparently on display in Barron's words is to protect his executive and his organization. It is not an instinct well suited to actually protecting a complex, modern organization. Probity, not protection, is what we should expect from a bishop.

In studying the history of the Catholic Church for the past almost 40 years, and analyzing the contemporary church for more than a decade here at NCR, one of the most important truisms I have come to appreciate is that the most important attribute for leadership in the church is to be a good judge of character. Bishops are monarchs. Within the broad restrictions of canon law and their promises of obedience to the pope, they can do what they want, but they will always need advisers to help them decide what should be done and aides to effectuate those decisions. This episode at Word on Fire makes me wonder if Barron is a good judge of character.

The pope has now appointed Barron to lead a diocese. His authority in Winona-Rochester will be ordinary, not derivative, and so it is vital he learn from the apparent managerial problems at Word on Fire. Rome also should consider whether or not he can be an effective diocesan bishop while continuing to lead this media ministry. In his statement the day of the announcement, Barron said he said he was "overjoyed and humbled" by his new appointment. I wonder. I suspect he would have been overjoyed to have been sent to Arlington or Brooklyn, but Sacred Heart Cathedral in Winona is 113 miles from the Minneapolis-St. Paul airport and Minneapolis-St. Paul, though lovely, is not a media capital the way Los Angeles, New York or Washington is.

We can all hope that Barron, who is undoubtedly talented and intelligent, will settle in to his new posting in Minnesota and become a good diocesan bishop. That is his day job. Perhaps the alleged problems at Word on Fire are a sign for him to focus less on his media empire and more on his duties as a bishop. Even good things come to an end.