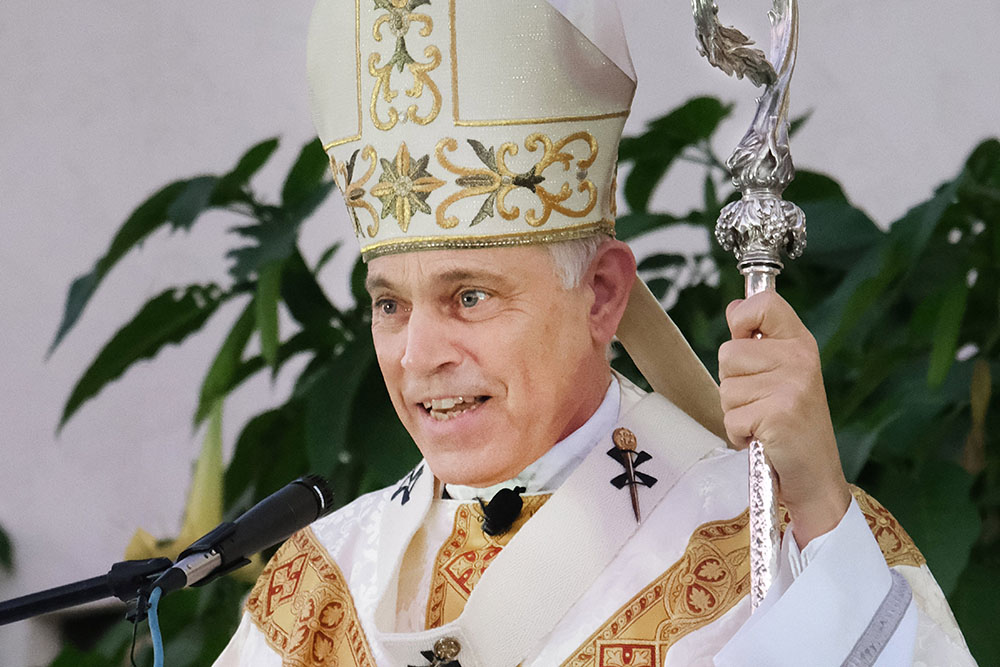 Archbishop Salvatore Cordileone assures us that his decree barring U.S. House Speaker Nancy Pelosi from receiving holy Communion has nothing to do with politics: "I assure you that my action here is purely pastoral, not political." The assurance is laughable. As Melinda Henneberger pointed out in the Sacramento Bee, Cordileone's claim is "a silly thing to say, since no one who would believe him needs to hear it, and no one who wouldn't will be at all persuaded by it."

The fact that Cordileone misunderstands the politics, however, is the least of his and the Catholic Church's problem. The larger difficulty is that his understanding of the religious values at stake is lousy, too! He has misrepresented several cardinal points of church teaching and then erroneously applied that teaching.

The Catholic Church's opposition to abortion, dating back to the Didache in the first or second century, and repeatedly pronounced in the past 60 years in the face of efforts to legalize the procedure, is well known. As our Holy Father Pope Francis wrote in his 2015 encyclical, "Laudato Si', on Care for Our Common Home," in a passage quoted by Cordileone:

When we fail to acknowledge as part of reality the worth of a poor person, a human embryo, a person with disabilities — to offer just a few examples — it becomes difficult to hear the cry of nature itself; everything is connected. Once the human being declares independence from reality and behaves with absolute dominion, the very foundations of our life begin to crumble, for "instead of carrying out his role as a cooperator with God in the work of creation, man sets himself up in place of God and thus ends up provoking a rebellion on the part of nature."

You see the problem. Cordileone does not, by his action, evidence the pope's conclusion that "everything is connected." He isolates abortion from all other sins and isolates, too, Pelosi's involvement in this issue.

Canon 1398 states: "A person who procures a completed abortion incurs a latae sententiae excommunication." Pelosi has not procured an abortion. She has given birth to five children, in fact. Instead, she has voted to keep a procedure the church views as immoral, and many Americans view as unjust, legal.

I think Pelosi is wrong in this regard, but there are several prudential judgments that need to be made: How to legislate on the issue? Who should legislate on this issue, the federal government or the states? Whether to pursue a legal strategy through the courts or through the legislature? Is this the kind of issue about which a prohibition is likely to be effective? Cordileone cannot pretend those prudential judgments do not exist or that the Catholic Church has definitive teaching on any one of them, let alone all of them together.

Does voting to keep abortion legal constitute illicit cooperation with evil? Our Catholic tradition has a rich theology of cooperation to address the complexities of living in a world in which one's own choices are circumscribed by, and involved with, the choices of other people. That theology was developed by St. Alphonsus Liguori in the 18th century, drawing on the theology of St. Thomas Aquinas and others, long before the challenges posed by a modern, pluralistic society came about. Cordileone examines none of the careful distinctions that theology demands.

Why single out Pelosi? After all, she is but one member, albeit the most powerful member, of one branch in the federal government. An effort to enshrine the right to an abortion in the California constitution has begun, but that vote will happen in the state legislature, not the one over which Pelosi presides.

Are judges who sanction permissive abortion laws to be sanctioned too? Assigning responsibility to Pelosi and not to those who have played, and are likely to play, a far more consequential role in determining what abortion laws will look like is not a religious judgment, is it? Does the grace of office supersede the need for deft political analysis to make such a determination? Did Aquinas have anything to say about the separation of powers? Did Augustine examine federalism?

Archbishop Cordileone has done an end-run around his brother bishops. They are now all going to be asked why they have, or have not, subjected pro-choice politicians in their ecclesiastical jurisdiction to a similar edict.

Cordileone's action also insults the affective collegiality the bishops should have with one another and with the pope. The Holy Father made clear last September that he had never denied anyone Communion. The U.S. bishops, despite the promptings of those bishops who, like Cordileone, favor weaponizing the Eucharist to make a political point, refused to embrace the strategy as they wrestled with their document on the Eucharist last year. The cardinal prefect of the Congregation for the Doctrine of the Faith warned against going down this path. Even the Catholic News Agency, owned by EWTN, had to admit that "only a small minority of U.S. bishops have come out publicly in support" of Cordileone's action.

Cordileone has now done an end-run around his brother bishops. They are now all going to be asked why they have, or have not, subjected pro-choice politicians in their ecclesiastical jurisdiction to a similar edict.

Cordileone is a bomb thrower of an archbishop and he has thrown a bomb all right. But the real damage will not be done to the halls of government. The real damage will be done — is being done — to the Catholic Church. For that reason, I hope Pelosi will appeal his edict to the Holy See.

Pelosi has a pretty good case. As Henneberger wrote:

According to a canon lawyer I consulted, Speaker Pelosi does have a right of appeal to Rome. If she chose to, she could base that appeal on Canon 213, which is that Christ's faithful have a right to receive the sacraments, Canon 843, §1, that the Church's ministers cannot deny the sacraments to those who properly seek them, and that the archbishop has improperly interpreted Canon 915, barring "obstinate public sinners" from communion.

That is not a slam dunk, but it is a strong case.

Creating a culture of life, in which both women and their unborn children are respected and shown solidarity, will not be achieved by edicts from snarling ecclesiastical potentates.

To be clear, I disagree with Pelosi about abortion intensely. I believe the law should protect those not yet born but who have a distinct DNA, never to be repeated. They are human persons, albeit very small ones, whose lives and dignity should be accorded all the protection laws and culture can provide.

Creating a culture of life, in which both women and their unborn children are respected and shown solidarity, will not be achieved by edicts from snarling ecclesiastical potentates. A culture of life will be assisted, but not created, by civil laws. I wish Pelosi would think powerfully about how she could become a witness to the truth and beauty of the Catholic Church's teaching about the sanctity of life.

The browbeating means her archbishop has chosen, however, will only enflame the culture wars. The fact he is raising money off his effort only confirms it. Cordileone can beat his proud breast, thinking he has done his duty, demonstrating the courage of his convictions.

Alas, he has only demonstrated the degree to which his own crimped ecclesiology has brought the culture wars into the life of the church in this country. It is Cordileone, not Pelosi, who is harming the church the most.