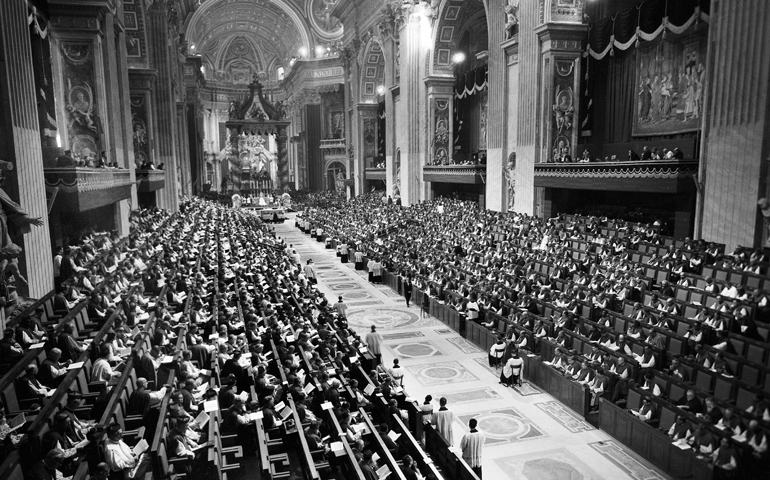 Nine days from now, Pope Francis will officially open a synodal process. As my colleague Brian Fraga reported on Wednesday, you wouldn't know much about it if you relied on the U.S. bishops' conference. They have sent no directives to the nation's bishops, no historical or theological reflections, no guidance, nada, niente. They have not amended their strategic priorities to reflect the start of this synodal process. And their last meeting was dedicated to figuring out how to justify a document on eucharistic coherence that no one needs and that Rome has indicated it does not want.

It was refreshing to hear Bishop Christopher Coyne of Burlington, Vermont, express excitement at the prospect of listening to what the people of God in his diocese have to say in this process. I suspect he is the kind of bishop who does a lot of listening. Others? Not so much. And why listen if you think you have all the answers?

That was the problem with a recent discussion of synodality at EWTN. Catholic University of America associate professor of theology Chad Pecknold discussed synodality with host Raymond Arroyo and repeatedly alternated between suggesting the whole thing was chaotic because the objective has not been adequately defined, and suggesting that the process was really a surreptitious effort to introduce a liberalizing agenda.

You would think the purpose of having a theologian as guest would be so that he or she could share some theology. Perhaps explain what light is shed on the topic by the account of the Council of Jerusalem in the Acts of the Apostles, Chapter 15? Maybe discuss the long history of conciliar deliberations in the life of the church, or the experience of collegiality in the history of U.S. bishops' conference, or the post-conciliar meetings of the Latin American bishops?

Conservatives are not the only ones who need to think how their words might prejudice the process at the outset. A report this week on a speech by Bishop Georg Bätzing of Limburg, the president of the German bishops' conference, said that he began his talk with a quote from Fr. Tomáš Halík, a Czech theologian:

The great ship of yesterday's traditional Christianity is sinking to the bottom, and we should not waste time pushing the deck chairs back and forth on the Titanic. If anyone thinks that the current storms surrounding sexual abuse will pass and everything will go back to the way it was before, they are mistaken.

I am sure that caught everyone’s attention. It is magnificent rhetoric. (And far be it for a columnist to criticize another living human being for occasionally getting a tad excessive with a metaphor.) It does seem that the Catholic Church in Germany is a decade behind the U.S. when it comes to grasping the rot exposed by the clergy sex abuse crisis or, more precisely, by the response of most bishops to that crisis.

Still, the bishop's comment is not entirely helpful. To begin with, all Christianity is "traditional" in some meaningful way and I would not cede that adjective to the devotees of 1950s Catholicism. Second, the Titanic was on her maiden voyage, and the church has been at this for two millennia. More importantly, there was no remedy for hitting an iceberg. We have the promise of Christ that he will be with his church until the end of time, and all we have to do is gather in his name for him to be present.

Things may not "go back to the way it was before," but who we are is always related to who we were. And one of those things that will always characterize the life of the faith is that some people need a sense of certainty and continuity that others do not. We cannot embrace the synodal process if we start by sneering at such needs and at the people who have them.

Some people need a sense of certainty and continuity that others do not. We cannot embrace the synodal process if we start by sneering at such needs and at the people who have them.

How, then, do we prepare? Pope Francis pointed the way forward in the introduction to a new book by Cardinal Michael Czerny and Fr. Christian Barone, which was published as an article at Commonweal magazine. After thanking the authors for making explicit the connections between his encyclical Fratelli Tutti and the teachings of the Second Vatican Council, the pope writes:

The ecclesial climate of Latin America, in which I was immersed first as a young Jesuit student and then in ministry, had enthusiastically absorbed and taken possession of the theological, ecclesial, and spiritual intuitions of the Council, actualizing and enculturating them. For the youngest among us, the Council became the horizon of our belief, and of our ways of speaking and acting. That is, it quickly became our ecclesial and pastoral ecosystem. But we didn’t get into the habit of reciting conciliar decrees, nor did we linger on speculative reflections. The Council had simply entered our way of being Christian and our way of “being Church”—and as life went on, my intuitions, my perceptions, and my spirituality were quite simply born out of the suggestions from the teachings of Vatican II. There wasn’t much need to quote the Council’s documents.

Today, after many decades, we find ourselves in a world—and in a Church—deeply changed, and it's probably necessary to make more explicit the Second Vatican Council's key concepts, its theological and pastoral horizon, its topics, and its methods.

Vatican II was not a liberal council or a conservative council. It was an ecumenical council. It called for both reform and ressourcement, and it saw the two as inextricably linked. The liturgical reforms were not cooked up in a laboratory, for example, but grew out of more than a century of liturgical renewal, a recovery of ancient practices that had been lost or at least obscured, such as the Easter Vigil, and a consequent wrestling with the ecclesiological implications of that most solemn of liturgies. The conciliar teaching on the "priesthood of all believers" was not an innovation, but a recovery of something made obvious in the Easter Vigil service.

It is frankly shocking that the U.S. bishops' conference has done so little to help the bishops and people of the church in this country prepare for this synodal process. But their inertia needn't be ours. This weekend, pick one of the dogmatic constitutions of Vatican II, and read it. Pray that the Holy Spirit will inspire you to discern its teachings in ways that challenge you. That is how the process begins, and there is no reason that all of us can't begin that.

There have been plenty of proposals for reform and renewal over the years. The only renewal we can achieve at this moment in our history is one rooted in the documents and the spirit of the Second Vatican Council. Where else would we start?