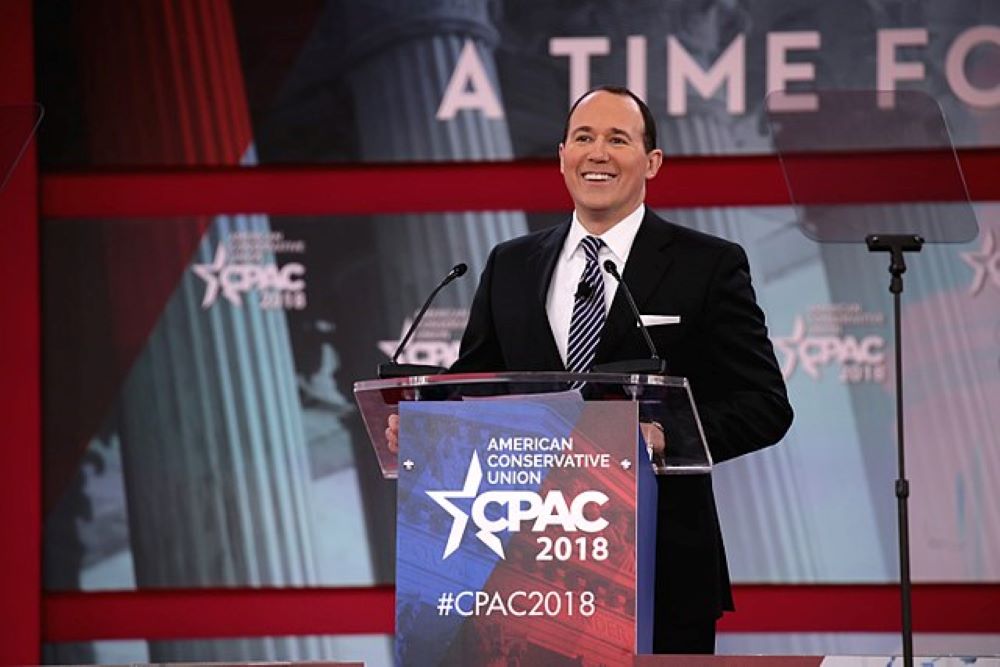 Raymond Arroyo speaks at the 2018 Conservative Political Action Conference in National Harbor, Maryland. Arroyo, whose weekly "The World Over" began airing on EWTN in September 1996, did not discuss the pope's criticism of the network in his Sept. 23 show. (Wikimedia/Creative Commons/Gage Skidmore)

Of all the speeches, homilies and documents that issue from Pope Francis, my favorite have become the transcriptions of his meetings with local Jesuits on his apostolic visits around the globe, transcripts then published by Civilta Cattolica. They are akin to the conversations after a holiday meal, when the unpleasant cousins have departed and only your dearest friends or relatives remain, and you are pouring the second or third round of after-dinner drinks: frank and familiar, sometimes a little edgy, often funny and always illuminating.

Last week, Civilta published the transcript of the latest such meeting, with 63 Jesuits in Slovakia. The exchange provided a window into the Holy Father's thoughts on a variety of topics, but the most newsworthy were his comments about EWTN.

"There is, for example, a large Catholic television channel that has no hesitation in continually speaking ill of the pope,” the pope said. “I personally deserve attacks and insults because I am a sinner, but the church does not deserve them. They are the work of the devil. I have also said this to some of them."

Of course, NCR has regularly published articles that are critical of popes and members of the hierarchy, but the comparison distorts the reality, at least mostly. In the first place, NCR has never represented itself as speaking for the authentic Catholic magisterium. We have published essays saying the magisterium is wrong, and that it should be changed, to be sure. EWTN features, and features regularly, those who claim they possess the authentic magisterium, not those who are constitutionally endowed with that authority. Phil Lawler, Fr. Gerald Murray, Robert Royal: They are all more Catholic than the pope, at least this pope.

In the second place, NCR has always been a newspaper first, and most of our commentary flows from and is based on that reporting. And the reporting speaks for itself. EWTN's principal news show, "EWTN News Nightly" only began airing in 2013. Conversely, Raymond Arroyo's weekly "newsmagazine" show "The World Over" began airing in September 1996. It served to extend the kind of conservative Catholic conversations found on the network's "Mother Angelica Live" into the realm of politics. Arroyo's show does not have a reputation for serious reporting and regular readers of this column will know how often I have had to call attention to the more brazen abuses of our Catholic tradition peddled by Arroyo.

On the first show since the pope's comments were published, which aired Sept. 23, Arroyo did not discuss the criticism of EWTN with his lead-off guest, Catholic University theology professor Chad Pecknold. The two discussed other parts of the pope's conversation with the Jesuits, such as his comments about sexual diversity and the reception of Vatican II, but not his comments about the network.

That said, Arroyo and Pecknold managed to display exactly the kind of criticism of Pope Francis that justified his comment in the first place. They mocked the pope's criticism of pastoral rigidity.

"How do you confess that in the confessional?" Pecknold asked with a smirk. "Father, I’ve been rigid three times. How would you even confess that?"

Later the two discussed the Vatican's decision to require proof of vaccination to enter the city-state and that of the Archdiocese of Moncton in Canada to prohibit the unvaccinated from attending public Mass. "Conformity to safetyism," Pecknold called it. "A betrayal of the Gospel."

Arroyo and Pecknold are latter-day Mother Angelicas, but without the wimple or the wit. As Jesuit Fr. James Martin pointed out in a recently republished essay from 1995, Mother was often angry and Manichaean, and Arroyo and Pecknold fit that bill, but she also had a twinkle in her eye at times. Arroyo's humor is usually mean-spirited, and Pecknold seems incapable of a smile, let alone a laugh. They are scolds, more akin to Cotton Mather than to any Catholic historical figure.

It is not that they only present one side of particular political issues. It is that the Catholic faith is always made subservient to a political agenda, a Republican and increasingly Trumpian agenda.

The real problem with EWTN, however, is not that it criticizes the pope and does so in ways that undermine the affective collegiality the church needs if it is to overcome the polarization that afflicts it. It is that the network is a shill for a political agenda. I watch Arroyo’s show most weeks. I watch EWTN News Nightly at least once a week. It is not that they only present one side of particular political issues. It is that the Catholic faith is always made subservient to a political agenda, a Republican and increasingly Trumpian agenda.

So, for example, whereas this column has repeatedly employed our Catholic intellectual and moral tradition to challenge pro-choice Democrats and their indifference to the dignity of unborn children, Arroyo hosts spokesmen for anti-immigrant groups like NumbersUSA and routinely refers to migrants as "illegal aliens." Arroyo's interview with Steve Bannon was remarkable for the outrageous claims Bannon made that were completely unchallenged by the host. His 2020 interview with President Donald Trump was an object lesson in fawning, uncritical and leading questions.

EWTN, then, is not like NCR. It is more like Catholics for Choice or CatholicVote.org, political organizations in religious drag.

The pope's comments about EWTN call for some serious discernment by the leadership of the network, and the leaders of the church should consider what leverage they have to encourage reform at the channel. Archbishop José Gomez, president of the U.S. bishops' conference and archbishop of Los Angeles, should ask himself if it is appropriate to remain on the EWTN board. Bishop Steven Raica of Birmingham, Alabama, where EWTN is based, should consider whether or not to sign the certification for EWTN to be included in the National Catholic Directory. Raica is a gentle soul, so hoping he would place the network under interdict is a bridge too far.

More than three years ago, I asked "Has the EWTN schism begun?" It is a proto-schism to be sure, but the bishops need to figure out how to keep the network and the millions of people who follow it from lapsing into a full-blown schism. And the Holy See, mindful of the network's global reach, needs to encourage the U.S. bishops to bestir themselves. Lance the boil. Only then can the healing begin.

A version of this story appeared in the Oct 15-28, 2021 print issue under the headline: Time for bishops to reconsider relationship with EWTN.