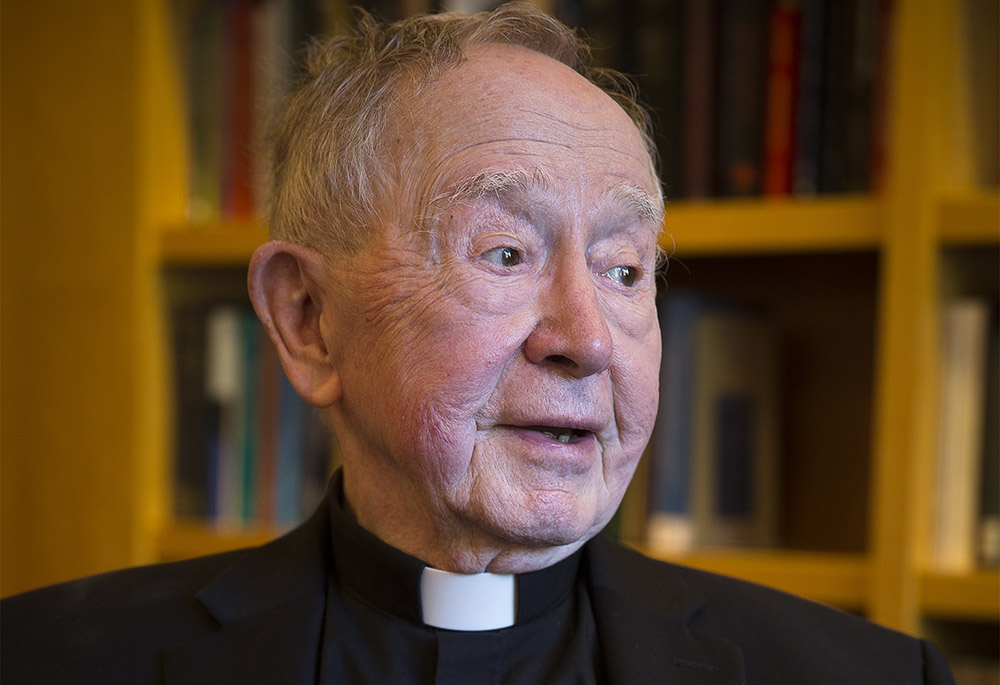 Jesuit Fr. John W. O'Malley, author of "The Education of a Historian: A Strange and Wonderful Story" (CNS/Tyler Orsburn) 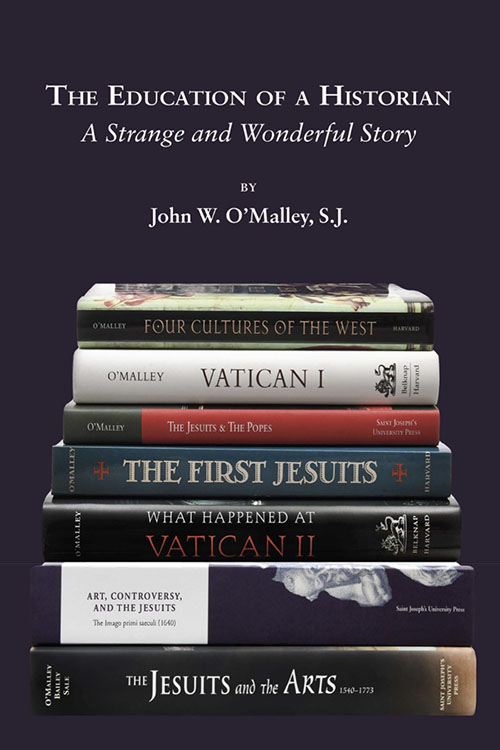 Memoirs can be a tricky literary genre, particularly for churchmen and scholars. It can mutate easily into score settling, justification of unsavory church and academic politics, or signaling a change of loyalty.

The just-published memoir of Jesuit Fr. John W. O'Malley, The Education of a Historian: A Strange and Wonderful Story, is exactly the opposite. It finally provides a narrative for one of the most influential Jesuits — in the United States and abroad — in the last hundred years and helps readers understand some enormous differences between Catholicism in the mid-20th century and today.

In the introduction, O'Malley already shows the connections between his life as a scholar and as a Jesuit priest. Talking about the post-Vatican II crisis of the Society of Jesus and General Congregation 32 (1974-75), he points out "how a crisis in the order intruded into my life and how it changed the direction of my scholarship."

But O'Malley's memoir is not inside baseball. It is full of wisdom and wit and poetry: "It tells how my first-time taste of gelato helped turn me into a resolute Italophile and prodded me to abandon German history in favor of Italian. The book thus reveals the crucial role of intuition in life and in scholarship. It illustrates how neither life nor scholarship is a tale of two plus two equals four."

The first chapter, "Growing Up in Tiltonsville," paints the picture of the small town in Ohio where he was born: social and religious dynamics, the impact of the Great Depression, the distance between the big cities and the rest of the U.S. Most of all, it depicts the uncomplicatedness of his vocation to the priesthood and the serendipity of his choice of the Jesuits.

Interestingly but not surprisingly, O'Malley seems to have arrived at Ignatius of Loyola starting from Augustine of Hippo. But the real intellectual and spiritual love of O'Malley's life remains Erasmus of Rotterdam: "My work on Erasmus provided me with important perspectives on two subjects that later became major projects for me — Vatican Council II and the history of the Jesuits."

"Many of the council's decisions echo themes in Erasmus, such as the need for vernacular liturgy, the evils of war, and openness to divine inspiration in other religions," O'Malley writes.

Chapter 2, "Trained as a Jesuit: America and Austria," is full of details on his understanding of himself thanks and through a deeper understanding of the U.S. in the 1940s and 1950s: called to be a witness to interracial marriage in Chicago, the reading of the 1958 political novel The Ugly American as a passage toward a more cosmopolitan cultural sensibility.

Chapter 3, "Trained as a Historian: Harvard and Rome," has wonderful and moving pages on his choice to abandon German religious history in order to embrace Italy. (His pages on the discovery of Italy, from Venice to Florence to Rome, during a trip from Austria in July 1961, brought tears to my eyes: I read O'Malley's book in Italy, where I have returned for the summer after the longest absence ever from my own country due to the pandemic.)

This key turn happened at a crucial time in the history of the Catholic Church as it was preparing for the Second Vatican Council. O'Malley was doing research in Rome and therefore in the "eternal city" for two of the four sessions of the 1962-65 council, and during one of these moments, his scholarship and life as a Jesuit priest were enriched mutually. The election of Pedro Arrupe as general of the Jesuits in 1965 was a turning point in the history of the Jesuits and also of global Catholicism.

Chapter 4, "Ever Deeper Into the Renaissance," describes the rise of O'Malley's scholarship in national and international recognition. It is the beginning of the story of a historian and of how his books had field-changing influence — especially four books, all of them translated in many languages: Praise and Blame in Renaissance Rome (1979), The First Jesuits (1998), Trent and All That (2002) and What Happened at Vatican II? (2008).

But this book introduces us to a scholar well aware of what was happening around him: the November 4, 1966, great flood of Florence (which took place when he was there), the 1967 riots in Detroit (where shortly after he took leadership roles in the university and in the society). An important chapter focuses on his participation as an elected delegate to the General Congregation 32 of the Society of Jesus, which opened at the beginning of December 1974.

In O'Malley's own words:

Somewhat to the surprise of the Jesuits worldwide, Father General Arrupe called for a general congregation of the Society to meet in Rome in early December, 1974. He wanted from the Society an assessment of how the Society was faring in the difficult scene of the late 1960s and early 1970s, years of turmoil in the church and in society at large — the student and race riots, the "sexual revolution," the wars and other troubles between colonies and mother countries, the Vietnam War first involving France and then the United States.

O'Malley describes his participation in that assembly not just as one of the three or four most consequential general congregations in the history of the Jesuits, but also as one of the most important experiences (and not just because another delegate was Jorge Mario Bergoglio, future Pope Francis). 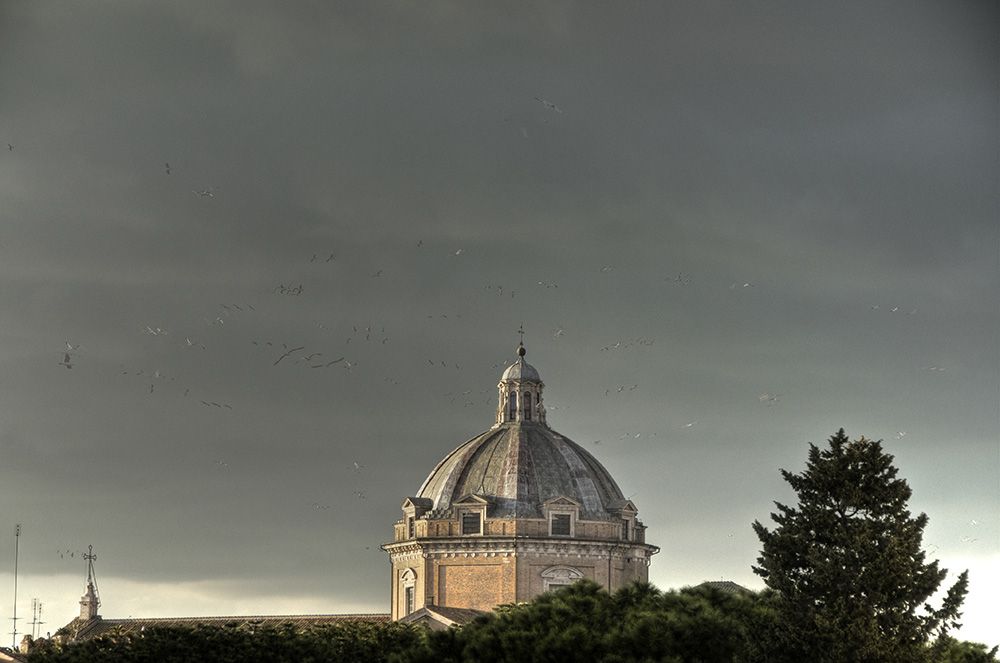 The dome of the Church of the Gesù, the mother church of the Society of Jesus in Rome (Wikimedia Commons/Uccio "Uccio2" D'Agostino)

Chapters 5, "From the Renaissance to the Jesuits," and 6, "Cultures, Councils, and Early Modern Catholicism," tell how a scholar who acquired international recognition for his studies on the Italian Renaissance became a key player in the research on the Society of Jesus (especially on its very early history), on a new way to interpret Catholicism at the time of the Protestant Reformation, and on Vatican II — in all of these cases initiating a new phase in the international scholarship in these fields. Intellectual curiosity goes hand in hand with ecclesial concerns.

By looking at O'Malley's story, we can understand the human element of doing history:

The book is therefore about how I worked as a historian and developed methods that resulted in such understandings. It shows how events impacted on my life and on what I chose to write about. It shows how and why I began to puzzle over certain issues and then shows where the puzzlement led me. Most broadly, it shows how a naïve young man from Tiltonsville made his way in the world. It thus shows that historians are creatures of flesh and blood, fears and hopes, living in time and space.

In six decades of scholarly work, O'Malley educated us to a deeper understanding of style and literary genres. He would not mind me saying that this book has pages that seem lifted from a Frank Capra movie (Chapter 1 about growing up in Tiltonsville) or from Federico Fellini's "La Dolce Vita" (Chapter 3 on Rome in the '60s).

Like the masterpieces of cinema, this memoir has different kinds of audiences.

For Americans, it's the life of a fellow American who changed the way we look at the church, also thanks to the effort of looking at America from afar, both geographically and chronologically.

For Catholics, it's the example of a member of the church born, raised and educated in a pre-cultural war Catholicism, where confessional boundaries with Protestant were clear, but probably more passable than today's intra-Catholic trenches.

For church historians and theologians, for academics young and old, it's the story of when church history was still struggling to be accepted as an integral part of the theological canon — and what Catholic scholars had to do and still can do about it.

For Jesuits, it's like a painting describing life of a scholar in the Society of Jesus at a particular time, from one kind of religious order to another kind after Vatican II, and the "Jesuit crisis" of 1981-83 after the dramatic change of leadership from Arrupe to Peter Hans Kolvenbach. (O'Malley's account of his testimony for the canonization process of Arrupe in 2019 is very interesting.)

This memoir has also the courage to be like a love letter for the Society of Jesus and for the Catholic Church: to echo the title of O' Malley's favorite book, a letter with much more praise than blame.

A version of this story appeared in the Sept 3-16, 2021 print issue under the headline: Jesuit John O'Malley’s memoir tells his 'strange and wonderful story'.