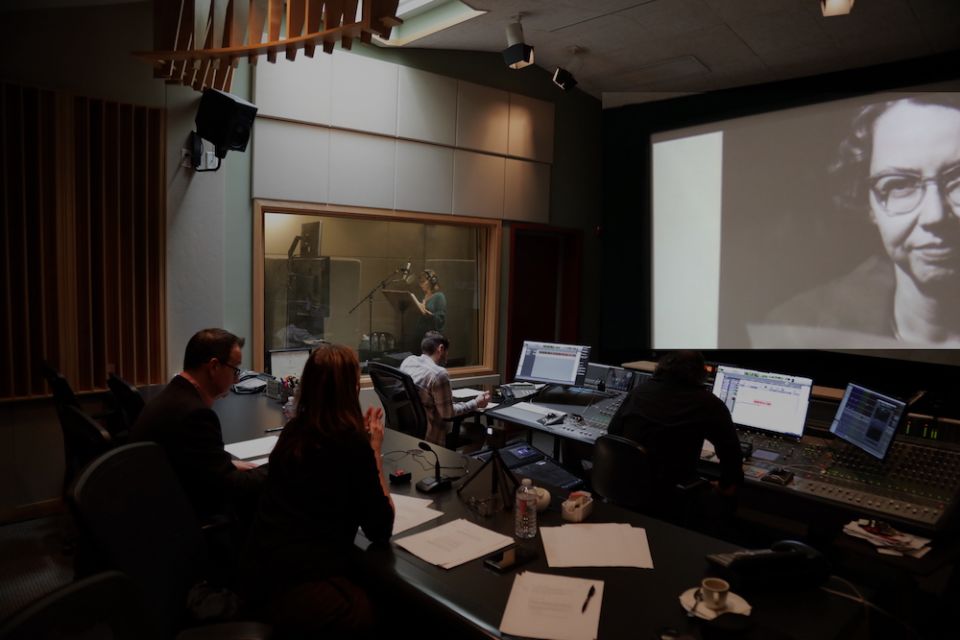 Editor's note to readers: This film review uses an anti-Black racial slur, in context, to name and quote from a short story by Flannery O'Connor.

If there is one thing about one of America's most famous Catholic novelists, Flannery O'Connor, it is that she defies the boxes we seek to put her in.

A new documentary, "Flannery," co-directed by Elizabeth Coffman and Jesuit Fr. Mark Bosco, explores many aspects of the life of this writer from Georgia, whose gift lay in her ability to find the "freaks" among us and make them revealers of the mystery of grace. These characters mark her work, just as the grotesque marks them.

Mary Flannery O'Connor grew up and lived most of her brief adult life in the segregated South. Born in 1925 in Savannah, Georgia, she and her parents moved to Atlanta so her father, Edward, could find work. Neither Flannery nor her mother Regina Cline O'Connor, liked Atlanta, so they moved in with family in Milledgeville, about 100 miles to the southeast. After the death of her father of lupus in 1939, Regina's family gave them the property and dairy farm that they named Andalusia. Except for a few short years when Flannery attended the Iowa Writer's Workshop, spent what became an unhappy time at Yaddo, a writer's retreat in New York, and months as the house guest of Robert and Sally Fitzgerald in Redding, Connecticut where she worked on her novel Wise Blood, Flannery was at home with her mother at Andalusia.

Flannery died of lupus on Aug. 3, 1964, a month after President Lyndon Johnson signed the Civil Rights Act. It was the beginning of a new era, a new phase of the struggle that still flows from his pen. She was 39 years old.

As a child (who once taught a chicken to walk backwards) and young student, Flannery was shy but quite the artist, excelling at caricatures. She even saw herself making a career as an artist. But she could hardly stop herself from writing and pursued fiction for her career, beginning early to try and figure out how to be a good writer and a good Catholic at the same time, as is revealed in her Prayer Journal, written while she was at the Iowa Writers Workshop, between 1946 and 1947.

Flannery has been called a regional writer. This is true in the sense that her novels are grounded in what she called the "Christ-haunted" but no longer "Christ-centered" South. She sees and observes life and people around her, but mostly she listens. Almost all her fiction is about whites and Blacks of her region. Her use of the word "nigger" in the mouths of her characters (but never in the mouth of the narrator, who calls Blacks "Negroes"), continue to call her views on race into question.

In a recent New Yorker article, Paul Elie, senior fellow at Georgetown University's Berkley Center for Religion, Peace and World Affairs, leaves little doubt as to his views, noting that many of her works support a charge of racism, writing, "It's not fair to judge a writer by her juvenilia. But, as she developed into a keenly self-aware writer, the habit of bigotry persisted in her letters." 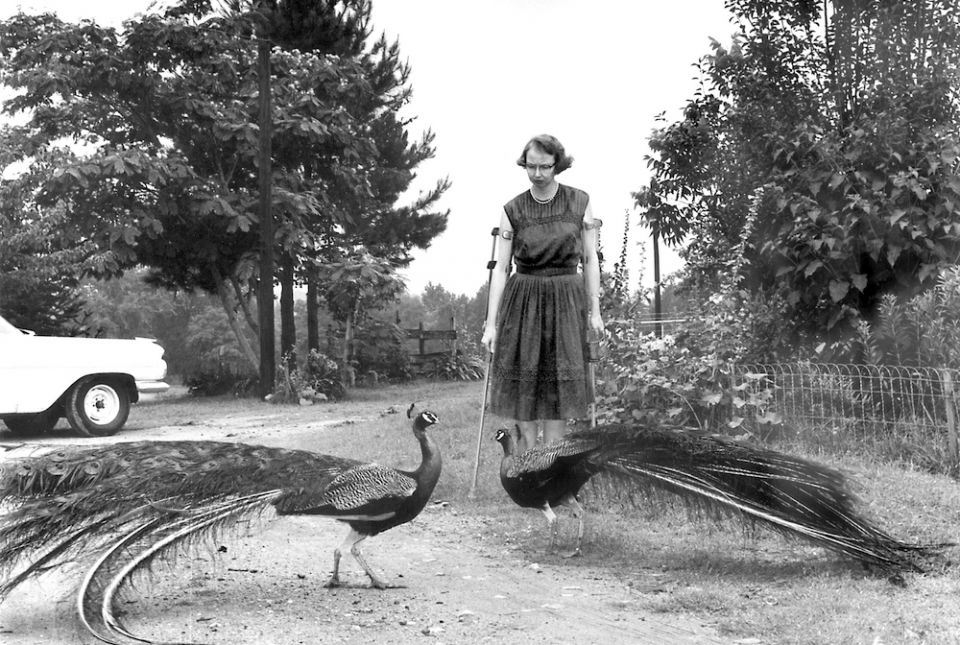 It is worth noting in this current time of racial upheaval, her short story, "Everything that Rises Must Converge," was listed in a June 4 New York Times article titled "Art that Challenges and Confronts Racism."

Dr. Randy Testa of the Harvard Graduate School of Education taught Flannery's work with Dr. Robert Coles in his signature course for Harvard undergraduates, "The Literature of Social Reflection." Having seen the documentary and read Elie's piece, Testa noted a central, telling flaw in The New Yorker essay and a rather glaring visual one in the film. In a letter to me about the essay and the film, Testa noted:

Writing in In Search of Our Mother's Gardens, Alice Walker pointed out that "… Essential O'Connor is not about race at all, which is why it is so refreshing, coming, as it does, out of such a racial culture. If it can be said to be 'about' anything, then it is 'about' prophets and prophecy, 'about' revelation, and 'about' the impact of supernatural grace on human beings who don't have a chance of spiritual growth without it."

Like crucifix planks, O'Connor's religious and racial sensibilities nowhere more converge than in her short story, "The Artificial Nigger" and the total omission of discussing it in the Elie piece does a serious critique of O'Connor a fundamental disservice.

The story of white, rural 60-year-old Mr. Head who decides to take his ward/grandson Nelson on a train trip from rural Georgia into Atlanta to teach "a lesson that the boy would never forget," Mr. Head intends for Nelson "to see everything there is to see in a city so that he would be content to stay at home for the rest of his life."

Before their journey begins, Mr. Head warns, "You may not like it a bit, it'll be full of niggers." The climax of the story comes when Nelson sees "within reach of him, the plaster figure of a Negro sitting bent over on a low yellow brick fence that curved around a wide lawn … about Nelson's size. … One of his eyes was entirely white and he held a piece of brown watermelon."

Stunned by the apparition ("Mr. Head looked like an ancient child and Nelson like a miniature old man"), Mr. Head says softly, "An artificial nigger," adding, "They ain't got enough real ones here. They got to have an artificial one."

(Despite "The Artificial Nigger's" specificity, the Flannery film shows in its discussion of the story, what was known as a "lawn jockey," a black man dressed as a horse jockey, holding a lantern. For cinema artists, this is sloppy work that undercuts the horror — and the revelation — of the hideous cheerfulness of the statue as O'Connor depicts it, leering at Mr. Head and Nelson.)

O'Connor herself said "The Artificial Nigger" was her favorite story, and "the best thing I will ever write." She noted that when John Ransom, founder/editor of the Kenyon Review "read it to a group of students and came across the word 'nigger,' he refused to read it aloud and substituted the word 'Negro.' But it did spoil the story. Because the people I am writing about would never use any other word."

Underscoring Alice Walker's point about grace and revelation, an exasperated O'Connor wrote in response to a friend's critique of her work, "She is always telling me that the endings are too flat and that at the end I must gain some altitude and get a larger view. Well, the end of 'The Artificial Nigger' was a very definite attempt to do that and in those last two paragraphs I have practically gone from the Garden of Eden to the Gates of Paradise. … But above all, what I had in mind to suggest with 'The Artificial Nigger' was the redemptive quality of the Negro's suffering for us all. Because there is nothing that screams out the tragedy of the South more than what my uncle calls its 'nigger statuary.' "

As Pulitzer Prize-winning novelist Alice Walker notes in the film, she and her family lived across the road from Andalusia when Flannery was writing and never knew it. She says, "No one should be locked into the ideologies that they were born into and were often not able to see."

But writer Richard Rodriguez probably expresses our current reticence to embrace O'Connor's writing when he says in the film, "The ear for Flannery O'Connor is everything. She captures the actual speech of people around her, and the speech of whites was racist, and she would record it. She's too good. Her mimicry of the voices around her is too acute, and with this accuracy she doomed herself because she is judged by modern readers as unacceptable." 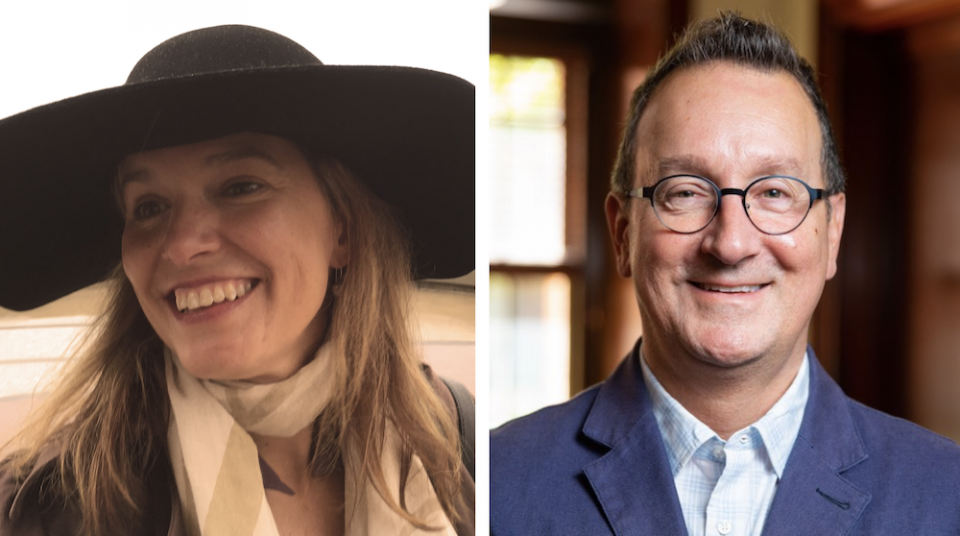 Hilton Als, an African American journalist at The New Yorker, also comments throughout the film. "She's a brilliant reporter, and she shows disruption of whiteness over and over and the fantasy of white power. She knows she's writing for racists, and they know something's wrong with that."

At the end of the day, even with the in-depth approach this documentary takes with the issue, perhaps we will remain ambivalent about Flannery's attitude toward race if taken as a single issue, but the one thing we cannot ignore is the core of all her writing: the mystery of life and the workings of grace in her characters, all of her characters. She is called a Southern Gothic writer because her characters are grotesque, flawed, physically maimed, and there is always some great violence or shock "that demand a redemptive act, a chance at restoration," said longtime friend and editor of her letters, Sally Fitzgerald. 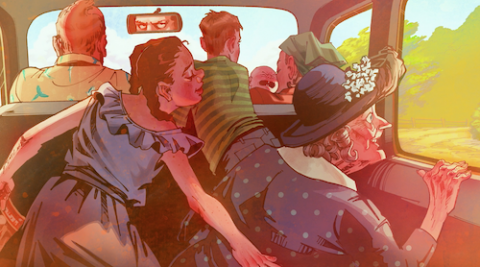 The beauty of this new documentary on Flannery (a one-hour PBS film, "Uncommon Grace: The Life of Flannery O'Connor," was released in 2017) is its aesthetic: seamlessly combining footage from a 1955 television interview, home movies, newsreel footage, line-drawn animation and comic illustrations of her stories, notably "A Good Man is Hard to Find," and selections voiced to perfection by actress Mary Steenburgen. Commentaries by Michael and Benedict Fitzgerald, who wrote the screenplay for the 1979 production of Flannery's first novel Wise Blood, and archival commentaries by many others are included. I especially enjoyed the comments by novelist Alice McDermott and O'Connor's biographer, Brad Gooch. The soundtrack reflects not only the South but also the eras of O'Connor's life. Bruce Springsteen, keenly influenced by O'Connor, closes out the film singing "Nebraska" — a song about a remorseless killer who could've step right out of "A Good Man is Hard to Find."

"Flannery" is the first film to win a new award from the Library of Congress, the Lavine/Ken Burns Prize for Film. The prize, $200,000 in finishing money, recognizes documentarians who focus on some aspect of American history.

Flannery opens in virtual cinemas July 17. Additionally, a four-part live, virtual discussion series "The Modern Consciousness: A Flannery Discussion Series," will feature guest moderators and panelists alongside the filmmakers for conversations "On Race" (July 20); "On Faith" (July 27); "On Disability" (Aug. 3) and "On Craft" (Aug. 10) in relation to O'Connor's work and writings. These will take place on the film's Facebook page.

Author hopes to trace 'an evolution of Catholic storytelling'