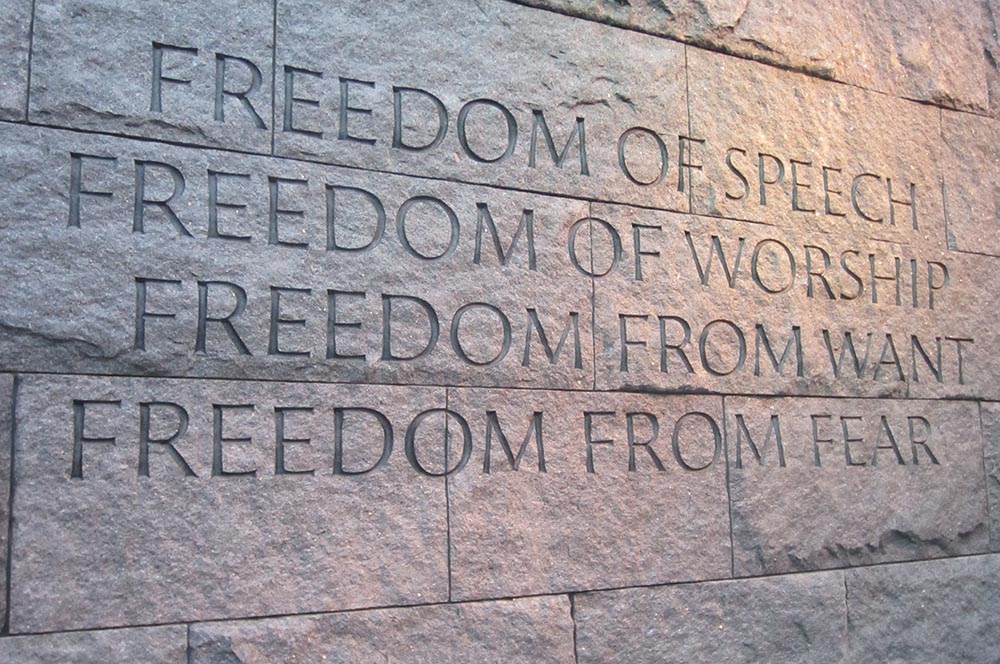 An engraving of the Four Freedoms at the Franklin Delano Roosevelt Memorial in Washington, D.C. (Wikimedia Commons/Another Believer)

CNN reports on Sen. Elizabeth Warren's call to expand the number of Supreme Court justices. I am a huge fan of Warren, I agree that the current court will likely wreak havoc on many issues of importance, and we can lay the blame squarely at the feet of Sen. Mitch McConnell, whose unparalleled refusal to bring the nomination of Merrick Garland up for a vote in 2016 was an assault on democracy. But packing the court is not the answer. At this moment in history, we need to preserve and protect the institutions we have. Whatever grievances any of us has with the current court, they did not join Donald Trump's effort to overturn the 2020 election. (And I pray that Warren recovers easily from her recent COVID-19 diagnosis!)

In The Washington Post, E.J. Dionne agrees with Warren, arguing that McConnell has already packed the court. Dionne highlights an often overlooked part of Warren's concern, one that I share:

She's especially concerned that by putting social issues such as abortion in the forefront, judicial conservatives give themselves cover for court decisions that enhance corporate power, reduce the ability of employees to fight back and undercut government's capacity to regulate economic activity in the public interest.

But I still think packing the court further is the wrong approach.

In the Des Moines Register, Jack Hatch and David Balducchi recall that Jan. 6 marks the anniversary not only of the insurrection that attacked American democracy but the day in 1941 when President Franklin Delano Roosevelt gave vital expression to democracy's values in his "Four Freedoms" speech to Congress. Hatch and Balducchi offer a to-do list for all of us who want to preserve FDR's vision and the memory of those who fought in various ways, at home and abroad, during the intervening 80 years to preserve our democracy.

NBC reports on the decision by the League of United Latin American Citizens (LULAC), the nation's premiere Latino civil rights advocacy organization, to drop the neologism "Latinx" from all of its official communications. A recent survey indicated only 2% of Latinos used the term, but it is often employed by white liberals as a way of signaling their conformity with the left's linguistic orthodoxies. It is no different from the way some conservative bishops place the tabernacle back in the main sanctuary of their cathedral to signal their conformity with pre-Vatican II liturgical tastes. In the former case, you end up with an ugly word and in the latter with an ugly sanctuary. Good for LULAC.

At RNS, Mark Silk looks at Associate Supreme Court Justice Neil Gorsuch's outrageous dissent in last week's ruling on religious exemptions from vaccine mandates. And Silk rightly puts his finger on a problem in our current First Amendment jurisprudence. "The only criterion the courts can use to determine the legitimacy of a religious belief is sincerity," he writes. "What if someone sincerely believes something that is demonstrably untrue?" Gorsuch, being a libertarian, is fine giving legal exemptions to any religious belief, but that misunderstands the relationship of rights to the common good.

At the Forward, Victoria Myers recalls an early plotline in the "I Love Lucy" show that challenged the antisemitic norms common in many social circles, without once mentioning that it was challenging anything. As an added bonus, the episode was hilarious.

The Gospel this past Sunday places the Blessed Mother at the center of the Advent season. Indeed, Advent is the quintessential Marian season, and we could well say that the entire church waits in Advent as she waited then, for the birth of her child. The Marian antiphon "Alma Redemptoris Mater" is sung throughout the season at Compline, and Palestrina crafted a beautiful motet around the theme, sung here by the Sistine Chapel choir.