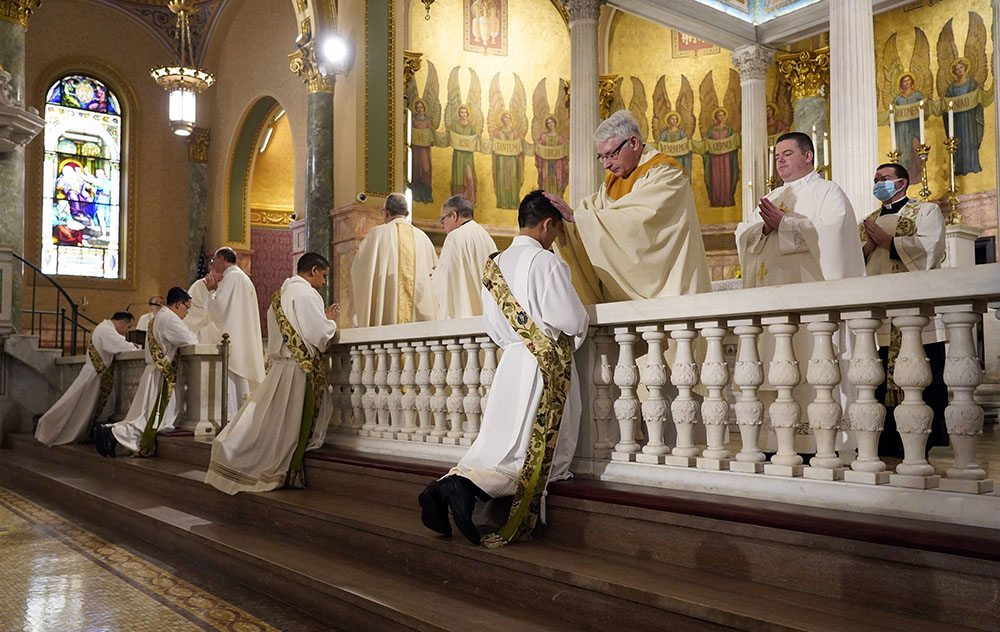 Four ordinands kneel as priests lay hands on them during their ordination to the priesthood June 5 at the Co-Cathedral of St. Joseph in Brooklyn, New York. (CNS/Gregory A. Shemitz)

As we begin the synodal process, ethicist Brian Stiltner from Sacred Heart University, writing at that school's blog "Go, Rebuild My Church," has a helpful post about two surveys, one of newly ordained clergy that came out in 2020 and the other from 2009 about the attitudes of laity who choose to leave the church. In both cases, what jumps out is the link between dissatisfaction and feelings of a lack of community. He poses two questions, neither of them ideological, that might be helpful in getting past the extant polarization as the church begins its synodal path:

Couldn't priests and lay people find common cause in rethinking parish life to support one another and to develop richer friendships with each other? Shouldn't lay people better appreciate the social-emotional needs of their priests, and shouldn't priests be able to share the duties of ministry more widely?

I missed the 2020 survey, which came out from CARA, but Stiltner's commentary makes me want to go back and read it.

At Politico, Ian Ward looks at a new theory — hopefully an epiphany for the party — from Democratic Party strategist David Shor about the highly educated young people who are overrepresented in the ranks of campaign outreach, fundraising, strategy and media, as well as think tank and congressional staff, of which Shor is himself an example:

According to Shor, the problem with this permanent class of young staffers is that they tend to hold views that are both more liberal and more ideologically motivated than the views of the coveted median voter, and yet they yield a significant amount of influence over the party's messaging and policy decisions. As a result, Democrats end up spending a lot of time talking about issues that matter to college-educated liberals but not to the multiracial bloc of moderate voters that the party needs to win over to secure governing majorities in Washington.

Add in the echo chamber of social media, and you have a party whose front-line workers are woefully out of touch with the people whose votes they need. The principal critic of Shor in the piece, Steve Phillips, of the Center for American Progress and of Democracy in Color, is a member of the donor class, something Ward should have mentioned.

Relatedly, at The New York Times, Ezra Klein also looks at Shor's thesis and his critics. Klein focuses on the class issue at work here, and asserts that class is more about education than wealth today. That is mostly true, but the role of blue-collar jobs and the social capital they provide in small and medium-sized towns remains an important factor, as discussed yesterday. There is a larger struggle here, between the donor class that wants to ignore Shor and the implication of his work, namely, that the Democrats need to find a way to attract working-class voters, and that the only way to do that is to abandon the neoliberal economic and trade policies by which the donor class got so rich.

In The Washington Post, a look at the uneven recovery and its impact on jobs. Those with college degrees have largely recovered the ground they lost during the pandemic, but those without college degrees and Black women are still struggling, the latter in large part due to the crisis in caregiving. The available jobs in the service industry lack the benefits mothers need. Biden's larger infrastructure bill, which includes funding for universal child care, is desperately needed to alleviate this inequity.

Georgia Secretary of State Brad Raffensperger did more last year to save our democracy than any other elected official. Now, of course, Donald Trump and his acolytes are coming for his job. To his great credit, Raffensperger is not backing down, and so the contrast with the feckless Republicans who know better but who refuse to challenge Trump is acute and obvious. Politico has the story.

At Texas Politics Project, from the University of Texas, Jim Henson looks at redistricting issues, immigration and the Lone Star state's increasingly unpopular abortion law. It appears that the more people know about the law, the less they like it. But what most jumped out at me came at the end of this week's posting. According to the Comptroller's office, Texas received $81.94 billion from the federal government in fiscal year 2021, which is $20 billion more than the $61.47 billion the state collected in state tax revenue. Remember those numbers the next time a Texas pol brags about their fiscal responsibility.