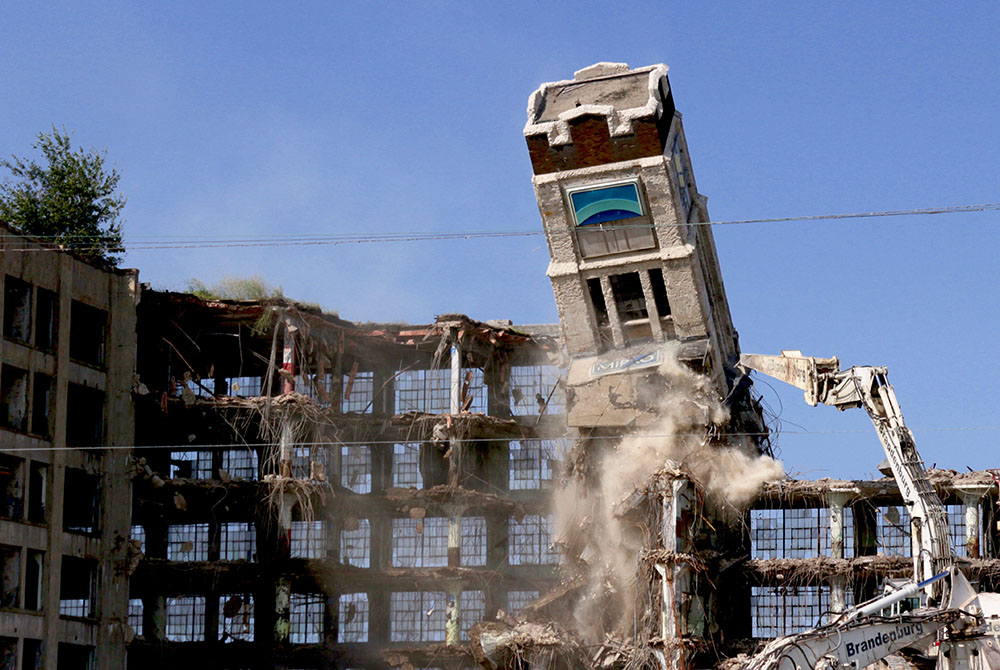 The Mirro Aluminum Company factory, which operated until 2003 in Manitowoc, Wisconsin, is demolished in 2017. (Wikimedia Commons/Michael Steeber)

A very important think tank study was just issued and it is a must-read for everyone interested in politics. "Factory Towns," a report from the organizations American Family Voices and 21st Century Democrats, examines where the Democrats have lost ground since the 2012 election in 10 Midwestern states.

Control of the White House and the Congress rests with the ability to win in these states and, as the report indicated, to win specifically in these "factory towns." This report should change the way we think about how elections are won and lost in these states.

The report suggests that in addition to the usual breakdown of urban, suburban and rural voting patterns, most of the change has occurred in two kinds of towns that do not really fit any of those categories, at least in the Great Lakes region and Midwest. Towns with fewer than 35,000 people in which manufacturing was once a principal source of employment are "small factory towns," and those with more than 35,000 but not attached to a large metropolitan area are the "midsized factory towns."

Sit down before you go on because the next statistic should knock you off your feet. The report examined seven swing states — Iowa, Michigan, Minnesota, Missouri, Ohio, Pennsylvania and Wisconsin — and two more partisan states — Illinois and Indiana — as well as 48 counties in upstate New York. Those who live in the "factory towns" account for 46% of the electorate in those states. And, between 2012 and 2020, while Democrats were increasing their margins in the urban and suburban areas of the Midwest by some 540,929 and 506,448 votes respectively, in the midsized manufacturing towns the Democrats lost 766,578 and in the small factory towns they lost a stunning 1,868,210.

Both sets of factory town counties, the small and the midsized, accounted for more Democratic losses than the rural areas of these 10 states, which saw 557,206 net decreases for the Democrats. These are hard numbers of actual votes, not polls.

The relationship between manufacturing job losses and changes in political loyalty were pronounced in these factory towns because their economies were less diverse, less able to provide employment alternatives to the manufacturing jobs that went overseas.

There was also widespread loss of manufacturing jobs in suburban counties during this same time period, but the economies of those counties were and are far more diverse, and other job opportunities presented themselves. So, despite the loss of 156,742 manufacturing jobs in the 40 suburban counties in these 10 states from 2001 to 2019, those counties experienced 19.3% growth for all jobs in the same time period. In the small "factory towns" overall job growth was less than half that, at 9.2%, and in midsized "factory towns," overall job growth was a miserable 3.6%.

Suburbs were not devastated as communities the way the small and midsized communities were by the loss in manufacturing jobs, and that difference shows up in voter behavior. Twenty-eight of the 40 suburban counties saw Democrats gain strength between 2012 compared to only 12 where Republicans did.

Job losses on their own don't always cause sizable shifts in political support — after all, these manufacturing job losses happened over 20 years under Democratic and Republican administrations. But when the anger of job losses and community down-spirals is paired with a candidate presenting himself as an economic populist and a champion of the little guy, partisan support can shift quickly and significantly.

Unlike Mitt Romney in 2012, Donald Trump was highly in tune with the frustration and invisibility felt by communities hard-hit by manufacturing job losses. In plain language over the course of five years, he hammered on unfair trade deals that cost American jobs. He positioned himself as standing up to China, both verbally and with punitive tariffs. He also offered up foreigners as easy economic scapegoats.

The report recalls that Trump mentioned NAFTA eight times in his first debate with Hillary Clinton in 2016, and "unfair trade deals" nine times. He told these people they had been forgotten, and the neoliberal policies, which President George W. Bush promoted and President Barack Obama failed to jettison, did indeed forget about these workers in the relentless drive to find the lowest possible wages at home or abroad.

The report goes on to examine the ways health declined once the jobs went. Using metrics from the County Health Rankings and Roadmaps that track a variety of health outcomes, not just access to affordable care, researchers found that the midsized factory towns saw their health outcomes decline by 5.7% in the last decade, and the larger the decline, the larger the shift to the GOP in the voting booth. Interestingly, they report that health outcomes in the small factory towns actually improved by 0.3%.

A third section shows the drop-off in unionization in the factory towns, which is part of the explanation for the decline in Democratic voting. Unions have long been the engine of progressive politics in the Midwest, and the region surveyed accounted for 93% of the nationwide decline in union jobs in the past decade.

The final section of the report examines race, and the results are not pretty. More diverse factory towns were less likely to see a vote shift away from the Democrats than those that were disproportionately white. The racist dog whistles worked.

The report does not seek to answer the more difficult and troubling question: Did the economic uncertainty make the appeal to racism more likely to succeed, or was the racism there all the time?

Such questions may be answered by historians, but politicians need something now, and so they will offer theories that serve their political ideology. What we do know is that Obama won Iowa twice before Trump won it twice, and of all 10 states surveyed, Iowa had the most factory towns, accounting for 65% of the electorate in the Hawkeye state.

Perhaps that flip was mere backlash but I suspect a more likely explanation will be that the charismatic Obama appealed to Iowans' better angels, and the charismatic Trump to their worst angels, and in this media-heavy age, charisma counts more than moral argument every day of the week and twice on Sunday.

I asked John Pouland, who serves on the advisory board for 21st Century Democrats, about the influence of religion on voters' attitudes in these factory towns. "You know, the study did not go into religious views, but there is data out there that demonstrates there is a higher degree of religiosity in these communities," he told NCR.

Pouland addressed the success of the GOP in messaging. "When Jesus wanted to help the poor, he was considered a savior, but now if you try and help the poor, you are considered a socialist. And that rubs some people wrong," he said. "This study did not get into that per se, but there are people in these communities that share economic concerns who would be receptive to Democrats reaching out to them. They care about people, about their neighbors, and they worry about efforts to dismantle their health care."

Currently, and for the foreseeable future, there is no road to 1600 Pennsylvania Avenue that does not run through the Commonwealth of Pennsylvania. Michigan and Wisconsin were both decided by whiskers the past two elections. The 10 states surveyed account for one-fifth of the U.S. Senate.

Every Democratic Party strategist and fundraiser and activist should study these findings. And every Democrat in Congress should make sure they vote for the two infrastructure bills that might bring jobs back to some of these hard-hit areas!

It is sad to realize so many Americans fell for Trump's strongman nonsense. The Democrats need to find ways to bring jobs and dignity back to these factory towns, or they will lose.